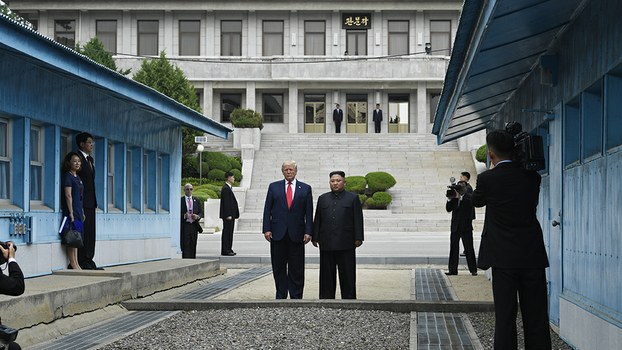 A surprise meeting at the DMZ between North Korean Leader Kim Jong Un and U.S. President Donald Trump was a good show, but made it clear that both sides need to commit to working-level talks if they want actual progress on denuclearization of the Korean peninsula, analysts told RFA’s Korean Service on Monday.

During the brief meeting at the Panmunjom Korean War truce village on Sunday, the third between Trump and Kim in little over a year, the two leaders did agree to resume talks, but several experts said that talks between the two leaders on the issue cannot really succeed if constant communication is not happening at the working level.

“The Trump-Kim DMZ meeting is a good start for resuming nuclear talks between the two. However, the working-level discussions are going to take a long while before another US-NK summit takes place,” said Sangsoo Lee, head of the Stockholm Korea Center at the Institute for Security and Development Policy in Sweden in an interview with RFA’s Korean Service.

“Both leaders need to announce agreement at the next summit, because the Hanoi summit which resulted in no agreement was a great embarrassment for [both Trump and Kim],” he added.

Christopher Hill, the former head of the U.S. delegation in the six-party talks agreed that Pyongyang and Washington need to move from feel-good optics to real work.

“It was another meeting that there seemed to be a good atmosphere. But, I think it’s really a time to get to work. I hope the working-level meeting happens in the next few weeks,” said Hill.

Shin Beom Chul, the director for the Center for Unification Security at the Ansan Institute for Policy Studies in Seoul, expressed optimism that a future meeting between the two in the United States would be possible.

“If the working-level talks go well, Kim Jong Un would probably want to visit the U.S. in September to give a speech at the U.N. General Assembly and have a summit with President Trump in Washington,” he said.

But he cautioned against believing that North Korea has changed its stance on total denuclearization.

“North Korea still want phased denuclearization, and [they] want to keep some nuclear weapons and nuclear materials [in place] even after sanctions are eased and [even if] South Korea-U.S. alliance is weakened. It will not be easy for the U.S. to concede in such negotiations, and it is likely that the working-level talks will take longer. It can be predicted, then, that a U.S.-North Korea summit will not be held this year.”

Hill said that the US needed to stick to its guns and not accept compromises like a nuclear freeze.

The New York Times reported shortly after the Panmunjom meeting that there were signs the U.S. might settle for a freeze, which it said amounted to acceptance of North Korea as a nuclear power with the promise that Pyongyang refrains from making new nuclear materials.

“If it’s a freeze in the context of denuclearization, that’s fine. If not, it’s really a very bad policy. North Koreans would be extremely pleased about that. Freeze is ‘de facto’ acceptance of them,” Hill said.

Former deputy director of the IAEA Olli Heinonen agreed that the priority must be on total denuclearization.

“From the meeting of yesterday, the most important outcome is the agreement to address the topics on technical level and look for solutions, and perhaps develop a roadmap to achieve the full denuclearization.”

He criticized the idea of a freeze as presented in the New York Times report, saying it was “a bit of old thinking.”

“It talks about nuclear freeze when we one sees this approach as a cut-off agreement: stop the gradual production of fissile material for nuclear weapons. The dismantlement of reprocessing and enrichment plants is something, which none of the previous agreements ever achieved. We have seen a closure of a nuclear weapon test site, but so far there is no tangible progress in the dismantling of nuclear weapons manufacturing sites.”

While the experts may have seen the casual meeting between Kim and Trump as a mere photo opportunity for both men, sources within North Korea say that the event was great PR for the U.S. president.

“Until now, people only knew President Trump as a natural economic strategist who succeeded in the real estate business,” said a source from North Pyongan province on Monday.

“[Now] he is highly regarded as an outstanding political strategist because he made the Highest Dignity [Kim Jong Un] come to Panmunjom,” said the source, using a term meant to show the revered status of the North Korean leader, grandson of the state founder Kim Il Sung.

A second source, also from North Pyongan, said, “The fact that the Highest Dignity crossed the military demarcation line to the southern part of Panmunjom to meet the U.S. president just a day after [Trump] proposed the meeting shows the power of the superpower president.”