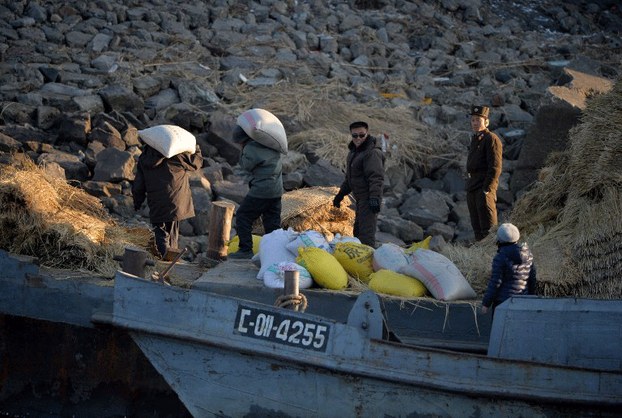 A North Korea soldier stands guard as people unload a boat on the Yalu River, which separates the North Korean town of Sinuiju from the Chinese border town of Dandong, Dec. 17, 2013.

North Korea’s feared State Security Department (SSD) has established a new “trade organization” tasked with earning foreign currency from China, according to sources who say the branch will likely use its broad powers to tap into channels used by the impoverished nation’s subsistence smugglers.

The SSD, also known as the Ministry of State Security, set up the organization “very recently” with its headquarters in the capital Pyongyang and several satellite offices in “local areas” of North Korea, a source from North Hamgyong province, along the border with China, told RFA’s Korean Service.

“While the whole nation is aware of the shortage of foreign currency in North Korea, it seems strange to establish a new trade organization under the SSD, which traditionally monitors the population’s activities to ensure they do not contravene the rules of the regime,” said the source, who spoke to RFA on condition of anonymity, after recently visiting China.

In addition to keeping an eye on the political actions of the public in North Korea, the SSD’s secret police force keeps tabs on North Koreans who travel to and from China, as well as telephone communications in border areas.

Sources said the move will likely have implications for North Koreans who subsist on Chinese currency they earn by running smuggling operations over the border.

They said North Koreans have expressed mixed reactions to reports of the trade organization, with some suggesting smuggling will become more difficult if the SSD takes over existing operations, and others saying it will become easier if the branch cooperates with smugglers to take a percentage of their earnings.

A source based in China who maintains a close relationship with North Koreans earning foreign currency there told RFA that a “large number of people belonging to the SSD” had been dispatched across the border since spring to “monitor and control the activities of North Korean residents” in the country.

“Since they are ostensibly working for foreign currency, they are called ‘trade representatives,’ just like others [who have been sent to earn cash for the regime],” said the source, who also declined to provide his name.

“However, if it is true that the SSD has established a new trade organization, there is a possibility that these people work for it.”

He added that it was a “well-known fact” that North Korea’s ruling Workers’ Party, the military and cabinet “run some companies earning foreign currency,” but said it was very unusual for the SSD to be joining their ranks.

“It shows that [the regime] is really suffering from a shortage of foreign cash,” he said.

According to the sources, the broad powers enjoyed by the SSD will likely result in friction between its trade organization and others seeking to secure Chinese currency for the regime under Supreme Leader Kim Jong Un.

North Koreans earning currency in China frequently endure long work hours and are routinely summoned to Pyongyang for interrogation by the SSD to determine whether they have met with South Koreans, who might convince them to defect.

They are required to earn at least U.S. $30,000 annually which—aside from a living stipend—is given over to their handlers, and are also required to perform additional “tasks of fealty,” such as treating visiting North Korean executives to fine dining and bringing gifts for officials when they return home.

The conditions place a huge amount of pressure on them to earn money by whatever means possible, sources say.

In September, sources told RFA that the regime has been withholding salaries from its overseas workers under the pretext of securing funds to celebrate the 70th anniversary of the ruling Workers’ Party this month, though their overseers are receiving payment as usual.

North Koreans sent to China to bring in cash for the regime said handlers had failed to pay “several months” of salaries to their workers ahead of the Oct. 10 celebrations marking the founding of the party in 1945.