North Korean Founder Kim Il Sung Did Not Have the Ability to Teleport, State Media Admits 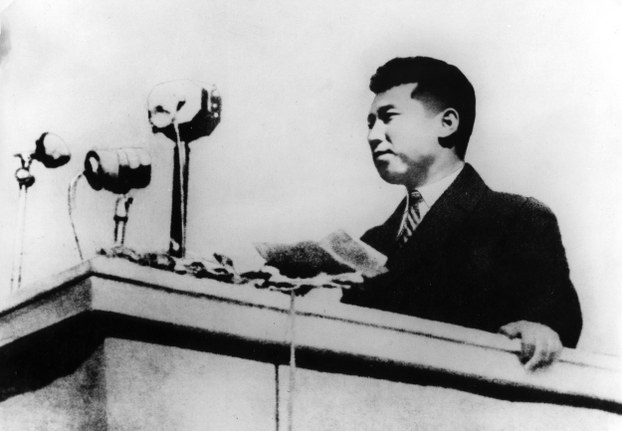 North Korean state media have issued a report denying that the country’s leaders have mythical powers, a possible signal that current leader Kim Jong Un is attempting to undo the deification of his predecessors.

In North Korea, Kim Jong Un, his father Kim Jong Il and his grandfather Kim Il Sung enjoy god-like status built up by a state-driven cult of personality. Countless myths tell of their purported exploits, some of which are taught to children in school lessons. Some tales distort documented history about the eldest Kim’s early history, and his son’s birthplace.

South Korean officials who analyze North Korean media say, however, that since Kim Jong Un came to power in 2011, tales of the supernatural aimed at deifying his father and grandfather have seen a decline.

Some of the official Kim myths that have been popularized in international media include Kim Jong Un being able to drive at age three, and Kim Jong Il shooting a 38 under par round of golf with five holes-in-one in his first attempt at the sport.

One myth, however, is so widely believed in the reclusive country that North Korea’s official newspaper, Rodong Shinmun, has had to step in and say it was not true:  Kim Il Sung, the founder of the country, did not have the ability to use the chukjibop technique, which is a type of “folding space” like teleporting fighters in Kung Fu movies.

Chukjibop, literally a “method of shrinking the earth,” is described as the ability to quickly move towards the blind spot of an enemy at a speed so fast that the attacker seems to temporarily disappear. The mythical version of a concept in East Asian martial arts has been attributed to several figures in Chinese and Japanese mythology, and more recently depicted in Japanese animation, or through the use of special effects in Chinese Kung Fu movies.

According to myth, Kim Il Sung was able to use the chukjibop technique to win a battle against imperial Japanese soldiers during the time when Korea was a colony of Japan (1910-1945), when he was purportedly leading Korean guerillas in exile.

“We need to pay attention to the current leader’s denial of the mythification of his predecessors, including his criticism of them in October, at Mt. Kumgang,” a ministry official told reporters.

State media quoted Kim as saying the establishment of the zone was the “mistaken policy of the predecessors.”

I don’t believe in faeries

But while deification is still occurring in North Korea, the ministry official said Kim Jong Un is attempting to keep the myths grounded in reality.

“We need to look at deification cases since Kim Jong Un took power,” the official said.

Several South Korean experts told RFA’s Korean service Thursday that since Kim became leader in 2011, propaganda projects pushing the cult of personality tell more believable tales, because if myths are perpetuated in an unscientific and irrational manner, fewer people will believe the more realistic stories about the Kim family.

“Kim Jong Un has studied in Europe and has a European way of thinking,” Yoo Dong-ryul of the Korea Institute of Liberal Democracy told RFA.

“If they continue using the same idolization and propaganda methods that they did in the past, [the rest of the world] will have a bad impression of North Korea, and the people won’t believe [what they are saying],” he said.

“So I think the [Rodong Shinmun] report is a result of this shift toward realistic thinking in propaganda projects,” he added.

“Idolization of the former leaders is important, but Chairman Kim showed his idea that everything should be based on reality,” said Yoo.

The shift also has the secondary objective of boosting the morale of the average person in North Korea, according to Kwak Gil Sup, head of a nonprofit called the One Korea Center.

He told RFA that Kim Jong Un’s propaganda strategy is, through its more realistic flavor, promoting the self esteem of the North Korean people.

The denial of chukjibeop was a signal that Kim Jong Un is making a clear break with past idolization efforts, a former South Korean vice unification minister told RFA.

“[Kim Jong Un] appears to be trying to break away from the established framework. [Everyone knows] chukjibeop is not realistic,” said Kim Hyung-suk.

But the former vice minister stressed that the chukjibeop denial should not be over-interpreted as an indication that Kim Jong Un wants to erase the legacy of the country’s former leaders.

“The report did not mean to draw a line with former supreme leaders. It merely showed that every problem should be approached from a practical standpoint,” said Vice Minister Kim.

“The characteristic of the Kim Jong Un era is that modern problem-solving should not be done in the old-fashioned way,” he added.