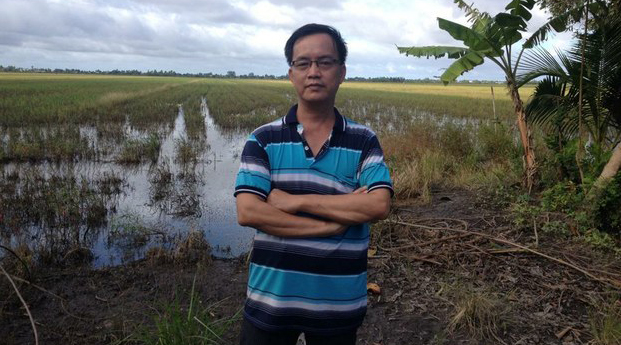 Authorities in Vietnam have arrested a man on charges of sharing national secrets after he used the popular social media platform Facebook to voice concerns over problems facing the country and criticisms of Vietnam’s one-party communist government, sources said.

Nguyen Quang Khai, 51, was taken into custody on Oct. 20 after being summoned for questioning by police in Dong Nai province’s Bien Hoa city. He was charged with “distributing or collecting state secrets and other materials” under Article 337 of Vietnam’s Penal Code.

Khai’s wife Nguyen Thi Diep was notified next day of the arrest, Diep told RFA’s Vietnamese Service on Friday, adding that she was about to leave for the Dong Nai police detention center to bring things to her husband and had no time to say anything more.

Also speaking to RFA, Paul Le Xuan Loc—a priest at the Redemptorist Chuch in southern Vietnam’s Ho Chi Minh City to which Khai belongs—said that Khai had been summoned “many times” for questioning by police over articles he had posted online.

“It surprises me that he has been arrested only now. I don’t think this charge makes any sense,” he said.

Khai had regularly used his Facebook account Khai Nguyen to raise concerns over social and political problems in Vietnam, and had been called in by police for questioning on April 21 over alleged violations of Prime Minister Nguyen Xuan Phuc’s Directive No. 16, mandating strict social distancing amid the early spread of COVID-19 in Vietnam.

He was also questioned in connection with investigations of Viet Tan, a U.S.-based political opposition party. Labeled a terrorist group by Vietnam in October 2016, Viet Tan describes itself instead as committed to peaceful, nonviolent struggle to promote democracy and human rights in Vietnam.

In March, a court in Ho Chi Minh City rejected the appeal of an Australian citizen convicted last year on charges of engaging in terrorism, sending him and two men convicted with him back to prison to serve their full terms.

Chau Van Kham, 70, a resident of Sydney, Australia, and member of the banned Viet Tan opposition party, was sentenced on Nov. 11, 2019 to a prison term of 12 years. Two men convicted with him—Nguyen Van Vieng and Tran Van Quyen—were handed terms of 11 and 10 years respectively.

Vietnam, with a population of 92 million people, of which 55 million are estimated to be users of Facebook, has been consistently rated “not free” in the areas of internet and press freedom by Freedom House, a U.S.-based watchdog group.

Vietnam’s already low tolerance of dissent has deteriorated sharply this year with a spate of arrests of independent journalists and publishers, as well as Facebook personalities, in the run-up to the rulling Communist Party conference in January.

Estimates of the number of prisoners of conscience held in Vietnam’s jails vary widely. Human Rights Watch says that authorities held 138 political prisoners as of October 2019, while rights group Defend the Defenders says that at least 240 are in detention, with 36 convicted last year alone.

Dear RFA Admin,
Network of Vietcong public security is checking vietnamese and others reading RFA from VN internet port. MUST have at least a free satellite of USA for Readers in VN to over take of Vietcong firewalls easilier.

According to this article :
"...Estimates of the number of prisoners of conscience held in Vietnam’s jails vary widely. Human Rights Watch says that authorities held 138 political prisoners as of October 2019, while rights group Defend the Defenders says that at least 240 are in detention, with 36 convicted last year alone."
So, Why is USA still continuing help Vietcong (VC) regime with money, training, etc. same same as helps VC strengthen its government as well as helping it in the problem of human rights violation in VN?