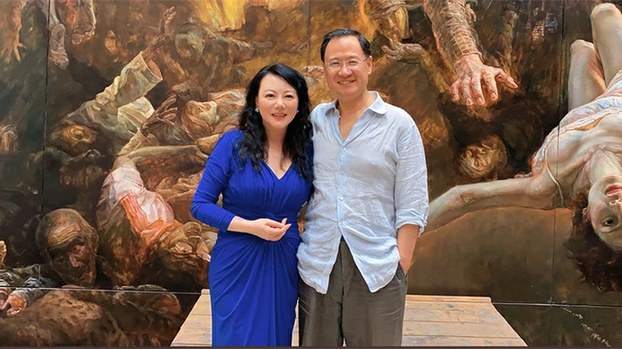 A defense attorney acting for Chinese publisher Geng Xiaonan, who was detained last month on suspicion of running an "illegal business operation" after she made public her support for former Tsinghua University scholar Xu Zhangrun, has met with her after several failed attempts.

Geng's lawyer Shang Baojun met with her at the Haidian District Detention Center in Beijing on Thursday, reporting that she looked tired and under considerable strain following repeated interrogations.

He said police are using the couple's publication of around 8,000 nutrition and cookery books to claim their Ruiya Books publishing house had been operating illegally from the start.

But he said Geng had expected to be targeted for political reasons as early as July.

"She felt that she was in danger back in July, so she contacted the Beijing Mo Shaoping law firm, and signed an instruction agreement with us," Shang said.

But he said the authorities were using coronavirus restrictions to make life far harder for attorneys seeking meetings with their detained clients.

"Now, because of the pandemic, lawyers have to get there first thing in the morning to get a meeting," Shang told RFA, adding that there is a limited online ticketing system in place, operating a first come, first served policy.

Tsinghua University sociology professor Guo Yuhua said Wednesday's meeting was the first time he had been allowed to meet with Geng since her detention on Sept. 9.

"Lawyers Shang Baojun and Qu Zhenhong had tried unsuccessfully to meet with Geng on several occasions before this," Guo told RFA.

"At first they went to the detention center and asked for a meeting, but they were not allowed in," he said. "Because of the pandemic, the number of people allowed in is being limited to 12 people a day, it's a bit like registering to see a doctor."

"As soon as they release the numbers, you have to get in fast to get allocated a number," he said.

Moved to tears by support

Shang said Geng was visibly moved to tears by the level of international support following her detention alongside her husband and business partner Qin Zhen.

"She was very moved when she heard about that," he said, adding that she had conveyed her gratitude to her family and supporters. "She was moved to tears more than once."

Authorities in Beijing detained Xu Zhangrun on the morning of July 6 after he called online for political reforms, on allegations of "seeking out prostitutes."

He was released a week later, but later told the media that he had been fired from his teaching post and subjected to public sanctions for "moral corruption" by Tsinghua University's law school.

Charges of "seeking out prostitutes" have been used before by the Chinese authorities to target peaceful critics and activists, or anyone who runs afoul of local officials and powerful vested interests. Xu has lodged a legal challenge, and denies the charges.

Friends said at the time of Xu's detention that it could be linked to the publication of one of his books in New York last month, a collection of some of his most controversial essays and articles.

Xu recently also criticized the Beijing municipal authorities for demolishing an artists' village, and said that Xi Jinping is taking China into "a dead end."

In a 10,000-word essay dated May 21, 2020, Xu described China as isolated from "global civilization," which would de-Sinicize in the wake of the coronavirus pandemic.

Xu's essay called for China's leaders to be held politically accountable, for the release of prisoners of conscience, including journalists and human rights lawyers, and for an end to the political targeting of academics.

Xu has also called for amendments nodded through by China's National People's Congress (NPC) in 2018 to be revoked, and for an end to massive international expenditure to boost China's influence overseas, as well as for legislation requiring officials to publish details of their assets and financial interests.