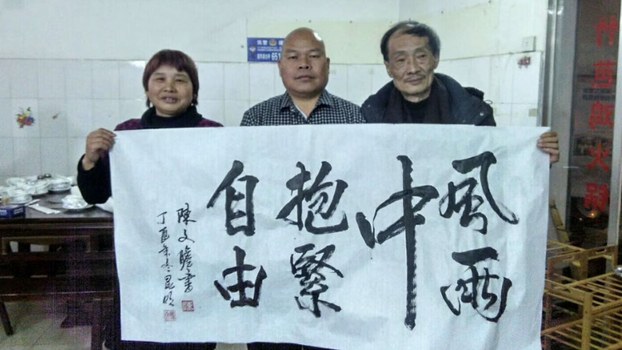 Authorities in the southwestern Chinese province of Yunnan have cut short the trial of an activist who expressed support for last year's protest movement in Hong Kong.

Xu Kun, a resident of Panlong district in the provincial capital Kunming, was held under criminal detention on Aug. 30, 2019 on suspicion of "picking quarrels and stirring up trouble," a charge frequently leveled at peaceful critics of the ruling Chinese Communist Party.

He was formally arrested on Sept. 30 on the same charge, and his case passed to the district prosecutor's office on Nov. 28, court documents relating to his trial showed.

"The trial began at 2.30 p.m. on Aug. 16," Xu's wife Li Lanzhen told RFA on Monday. "They wouldn't allow anyone into the public gallery, and only two family members were allowed to be present."

"His lawyer said that there was no pretrial meeting, and that the materials relating to the case weren't made available to them in advance," she said, adding that the defense attorney's request to call witnesses was turned down by court officials.

After just 10 minutes, the judge ordered the trial to adjourn, with another date to be announced, Li said.

"Lawyer Li Guisheng called the witnesses, but they didn't come, so they just made the defense as best they could," she said. "Then, Judge Du Bin ordered the court to adjourn, and I have no idea when it will reconvene."

Xu's indictment accuses him of retweeting around 1,000 tweets in support of the anti-extradition movement and pro-democracy demonstrations in Hong Kong last year via his Twitter account.

Twitter is not generally available to Chinese internet users, and requires circumvention tools to bypass the system of government censorship, blocks, and filters known collectively as the Great Firewall.

He is accused of "reposting and publishing a large number of false and harmful items slandering China's political system and the Chinese Communist Party, insulting Chinese leaders and distorting major domestic news events."

The prosecution cited cell phone screenshots and photos from Xu's cell phone as evidence for the charges, which come under Article 293 of the Criminal Law of the People’s Republic of China.

"It is clear that the evidence is credible and sufficient, and he should be held criminally responsible for the crime of picking quarrels and stirring up trouble," the indictment said.

"If this country would only allow its citizens to vote for those in power, for different political parties and leaders, and to take to the streets to give voice to dissenting opinions, nobody would be picking quarrels or stirring up trouble online," Pan said.

"This is just a charge that the Chinese Communist Party likes to pin on dissidents."

Xu's defense attorney Li Guisheng called for the trial to be held in open court.

"The right to a public trial is one of the key principles of criminal procedure law," Li said in his argument in court, a copy of which was seen by RFA. "Xu Kun's isn't a case that merits being tried behind closed doors, and should be made public in accordance with the law."