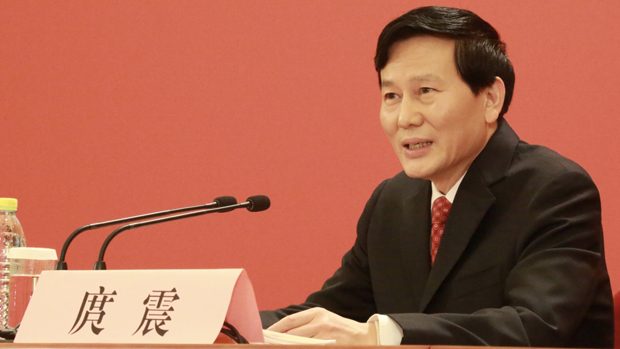 The ruling Chinese Communist Party (CCP) has appointed a propagandist who sparked protests in the southern city of Guangdong in 2013 editor-in-chief of its official newspaper, the People's Daily.

Tuo Zhen, 61, was the presumed author of a New Year front page editorial in the cutting-edge magazine Southern Weekend that prompted a strike by journalists and days of streets protests in January 2013, during the early days of CCP general secretary Xi Jinping's tenure.

He is believed to have rewritten a New Year editorial calling for constitutional government and political reform during his tenure as Guangdong provincial propaganda chief, a move that later saw him promoted to deputy propaganda minister in Beijing.

Tuo's latest move was made with scant official fanfare, with his name merely appearing in the "About Us" section of the People's Daily online edition, listed as "editor-in-chief." The China-based news site The Paper picked up the change and published a report in Chinese on Wednesday.

Beijing-based political journalist Gao Yu, said the rewriting of the editorial paved the way for a nationwide purge of the country's cutting-edge, liberal media, under a directive titled "Document No. 9," which bans talk of democracy or constitutional government, freedom of speech, or judicial independence for China.

"The media belongs to the party; that's what's happening now," Gao told RFA. "This means the implementation of Document No. 9."

"Tuo Zhen has done a great job ... of suppressing the Chinese dream of constitutional government and of purging Southern Weekend," Gao said. "After that, the party Central Committee went on to formulate Document No. 9, which I was arrested for."

During her November 2014 trial, Gao was accused of leaking Document No. 9 to a Hong Kong-based media outlet.

The directive lists "seven taboos" to be avoided in public debate, including online and in China's schools and universities, including democracy, freedom of the press, judicial independence, and criticism of the party's historical record.

The document was already available online, and Gao argued that the media organization in question could easily have downloaded it elsewhere. Gao was jailed for seven years for "leaking state secrets overseas" but was later released following a sentence reduction, and amid an international outcry.

"[Tuo Zhen] is the kind of person they are hiring now," Gao said. "Anyone who wants to write the truth goes to jail."

"Those who play the executioner and purge the media, they get promoted."

The only possible outcome

Li Datong, the former editor-in-chief of Freezing Point Weekly, who published an open letter in 2018 opposing Xi Jinping's abolition of term limits on his office, agreed.

"But of course, it's only natural," Li said. "That's what this system is; this is the only possible outcome."

The news of Tuo's promotion emerged as the U.S. said it would designate a further six state Chinese media organizations "foreign missions."

Foreign missions are required to provide the State Department with details of their payroll and assets in the U.S.