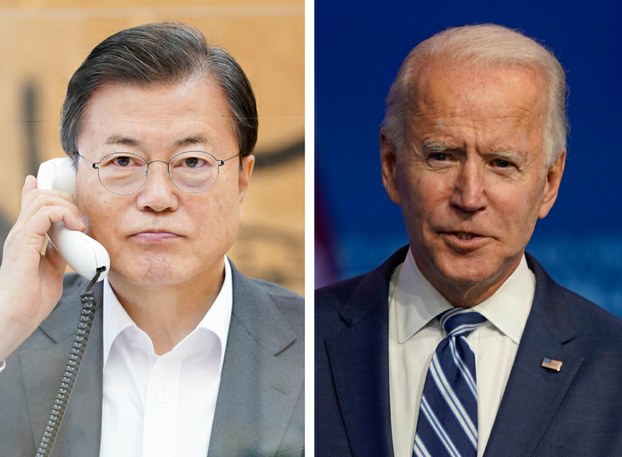 South Korean President Moon Jae-in and U.S. President-elect Joe Biden during a phone call this week reaffirmed Seoul and Washington’s commitment to their alliance, a development that North Korea watchers told RFA represents a return to normalcy in their bilateral relationship and also U.S. policy on North Korea.

The talks Thursday followed meetings between South Korean foreign minister Kang Kyung-wha and several Democratic senators and other allies of Biden this week, where she asked for the new administration to devote “summit-level” attention to dialogue with North Korea on denuclearization.

Talks between President Donald Trump and North Korean leader Kim Jong Un appeared to be promising as the two leaders built a rapport their first summit in 2018, but negotiations stalled after their 2019 summit abruptly ended.

The Biden campaign website characterized the president-elect’s foreign policy plans as a restoration of U.S. leadership. Regarding threats like a nuclear North Korea, the campaign said it would be “reaching out to our partners in Asia to fortify our collective capabilities… We will also strengthen our alliances with Japan, South Korea, Australia and other Asian democracies.”

“In North Korea, President Biden will empower our negotiators and jump start a sustained, coordinated campaign with our allies and others, including China, to advance our shared objective of a denuclearized North Korea,” the campaign said.

That strategy would be a sharp contrast to the bilateral engagement of the Trump era and harkens back to the Obama administration’s approach of “strategic patience” toward North Korea. The U.S. gradually increased sanctions and laid out several “pre-steps” Pyongyang would have to agree to, including a moratorium on its nuclear ambitions, in order for a return to the negotiating table to discuss establishing trade ties or normalization of relations.

Experts in South Korea and the United States told RFA they anticipate that once Biden is sworn in, he will likely return to strategies similar to those of the Obama administration.

“When Biden was vice president of the U.S., he actively pursued a ‘Pivot to Asia strategy.’ That eventually expanded into the Indo-Pacific strategy,” Park Yong-ho, the director of the Peace Research Institute Seoul told RFA’s Korean Service Thursday.

“[South Korea] will continue to take the same stance, as it originally began with the Obama administration’s Pivot to Asia strategy,” said Park.

At a forum to discuss the effects of the presidential election on the Korea-U.S. alliance hosted by South Korea’s main opposition People Power Party Thursday, former UN Secretary-General Ban Ki-moon said the Biden administration’s approach to North Korea would have a different focus from that of the Trump administration.

“The denuclearization of North Korea will be promoted based on the diplomatic effectiveness of the bottom-up method rather than the political symbolism of the top-down method,” said Ban.

But he also said that discussions on outstanding issues that Pyongyang wants to resolve, such a peace treaty to officially end to the 1950-53 Korean War, and stopping joint military drills between South Korea and the U.S., would not be entertained by Biden without a firm commitment to denuclearization.

People Power Party lawmaker Thae Yong-ho, who was North Korea’s deputy ambassador to the UK prior to defecting to South Korea in 2016, predicted that North Korea and the U.S. would spend some time figuring each other out during the first few months of the Biden administration.

Trump had criticized the drills as expensive and wasteful. Drills in 2020 were scaled down due to the coronavirus.

“Drawing from the campaign’s messaging, I am hopeful that the Biden administration will give serious attention to humanitarian issues including the obstacles to effective aid delivery and reuniting Korean American families with their loved ones in the DPRK,” Daniel Jasper, Public Education and Advocacy Coordinator for Asia at the American Friends Service Committee (AFSC) told RFA’s Korean Service.

“Biden seems to have gotten the message that humanitarian issues form the undergirding to the US-DPRK relationship and that these issues will need to be addressed to help build an environment conducive to peace,” said Jasper.

“Given Biden’s foreign policy experience, we trust he will recognize the value in privately-funded non-profit organizations carrying out lifesaving aid operations, as well as, the broader benefits of allowing Americans and North Koreans to form working relationships around improving human security,” Jasper said.

Greg Scarlatoiu of the Committee for Human Rights in North Korea (HRNK) told RFA he would like to see the new administration prioritize human rights, including increased attention to the plight of North Korean refugees in China,  increased transparency for humanitarian efforts in North Korea, and an emphasis on human rights in nuclear negotiations with North Korea.

Additionally, he said he hoped the Biden administration would appoint a Special Envoy for North Korean human rights issues, a position that hasn’t been filled since Ambassador Robert King stepped down in January 2017.

“I think when Biden gets into office, I think it will be given greater priority and I think they’ll try to make an appointment,” King told RFA.

“I think Biden is going to be much more a traditional president in terms of what he does. I think he will have an interest and a concern about the human rights issues in North Korea,” he added.