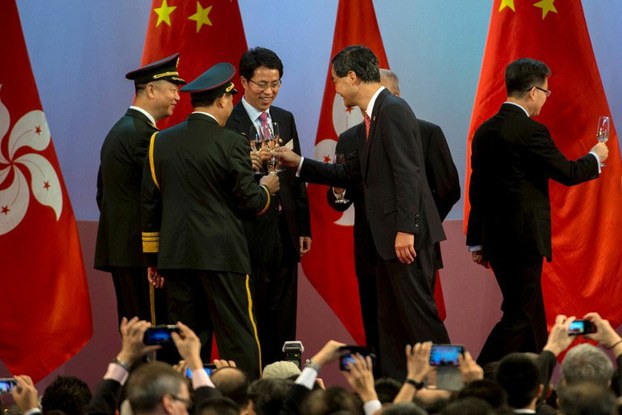 As campaigning intensified in the run-up to Sunday's Legislative Council (LegCo) elections in Hong Kong, embattled chief executive Leung Chun-ying has been accused of provoking the spread of pro-independence rhetoric as a way of currying favor with the ruling Chinese Communist Party.

Leung, who has recently warned schools that they should punish talk of independence for the former British colony, and whose officials have barred pro-independence candidates from standing in the current election, now faces a robust backlash for his focus on the topic.

Former colonial-era second-in-command Anson Chan has suggested that Leung is deliberately fueling the independence movement, in pursuit of a second term in office.

The next chief executive will be chosen by a 1,200-strong election committee that has been vetted by the Chinese government.

Speaking out about the warnings against discussing independence in schools, Chan said Leung was using a "sledgehammer."

“The way the government should approach this ... is to allow teachers and parents to examine the pros and cons, and allow the subject to be discussed openly," she said.

Chan added: "It almost leads me to believe that the chief executive has a hidden agenda. It’s to create such havoc in Hong Kong that he has more reasons to persuade Beijing that a strong pair of hands is needed to keep Hong Kong in control."

There are even signs that Beijing wants to rein in the anti-independence rhetoric.

The Beijing-backed Sing Pao Daily newspaper, the oldest Chinese-language paper in Hong Kong, ran a front page splash earlier this week calling for disciplinary action against Leung, who it accused of fanning the flames of support for independence with his recent crackdown.

It also pointed the finger at Zhang Xiaoming, who heads Beijing's representative office in Hong Kong, accusing both men of "spreading the independence mindset" and for "creating social instability."

The paper was the latest in a long line of critics who accused Leung of being the "godfather" of Hong Kong independence in order to look good in Beijing's eyes by cracking down on it. Similar comments were also published in the Ming Pao newspaper.

Veteran political commentator Ching Cheong said the editorials suggest extreme displeasure in Beijing after headline after headline mentions a political idea that has only recently been discussed in public at all.

"The central government likely wants to draw a line under the topic of independence for Hong Kong, once and for all," Ching told RFA. "I'm pretty sure this is coming from very high up indeed."

"There's no way that somebody further down the food chain would be attacking the central liaison office."

Ching said Beijing will likely be looking for a political scapegoat, too.

"Independence has become the biggest problem to emerge in Hong Kong in the tenure of [President] Xi Jinping, and heads are definitely going to roll," he said.

Tam said the liaison office under Zhang had been holding "community meetings" across the internal border in neighboring Shenzhen to direct people which way to vote in the LegCo election.

"This has never happened before, and I think they think they are going too far, and that they're out of control," he said. "This article has definitely damaged Leung's administration."

"This election ... has become a proxy war between Beijing and pro-independence forces," the Hong Kong Economic Journal said in a commentary article.

"And all because no other than Leung himself stoked the independence rhetoric, aided by Beijing’s top official in Hong Kong," it said.

Hong Kong's Electoral Affairs Commission has barred six would-be candidates from running for LegCo on the grounds that they support independence, even though they had signed a loyalty pledge recognizing that Hong Kong "is an inalienable part of China."

But the Economic Journal's political columnist S.C. Yeung said Leung had failed to distinguish between those in Hong Kong who support outright independence, and the "localist" movement that seeks to preserve the city's unique character while remaining under the Chinese flag.

"Leung is known to abuse his authority and expand its influence beyond his ambit," Yeung wrote. "He is only too willing to use everything at his disposal to stay afloat because he is sinking like a stone."

Recent opinion polls show that 63 percent of respondents disapproved of Leung, while just 19 percent approved of him. Younger, more educated people are the least likely to support him, the paper said.

Reported by Lam Kwok-lap for RFA's Cantonese Service, and by Yang Fan for the Mandarin Service. Translated and written in English by Luisetta Mudie.

What were Leung's opinions on independence a year ago and 5 years ago? Were they the same as today?