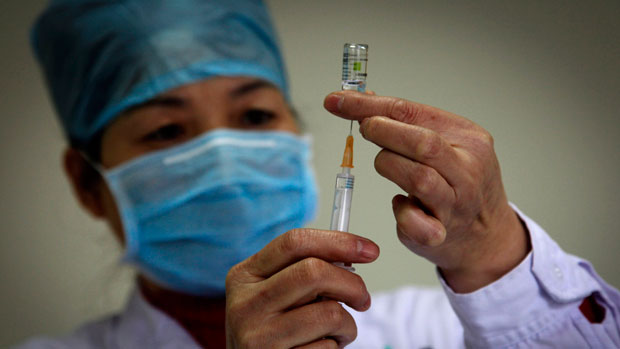 A Chinese health worker prepares a dose of vaccine in a file photo.
AP

China's parliament will discuss a draft law this week that would tighten the regulation of vaccines, including their production, research, and distribution, but campaigners said problems will likely remain with its implementation.

The bill, if passed, will include severe punishment for anyone engaging in the fabrication of data or seeking to cover up problems.

It comes after the administration of President Xi Jinping pledged to reform the sector following a string of public health scandals triggered by fake, out-of-date and substandard vaccines that have sickened large numbers of people—many of them children—in recent years.

It was submitted to the 13th National People's Congress (NPC) standing Committee for its third reading on Tuesday.

Li Xin, whose daughter was made sick by a faulty vaccine adminstered in the central province of Henan, said that the problem lies with collusion between government officials "investigating" such scandals and the companies producing faulty vaccines.

"It may have a deterrent effect, but many of these companies that make vaccines are actually in business with the government," Li said. "Their largest shareholders ... are state-owned entities."

"In mainland China, people tend to hold more clout than the law," Li said. "Mainland China has a lot of laws, but are they doing any good? Hard to say."

Wang said the authorities should set up a mechanism that can track the source of any vaccine, so as to ensure quality.

"Punishment is only one aspect," Wang said. "The most important thing is to improve the traceability of products. Every single vaccine should be traceable."

Wang said the government should also change its procurement guidelines to discourage the selection of exceptionally low bids.

Li is the husband of He Fangmei, who was detained by Henan police on Feb. 25 during a protest by parents of children affected by tainted and out-of-date vaccines outside the National Health Commission in Beijing.

He, who is also known by her online nickname Shisanmei, was initially handed a 15-day administrative sentence after being sent back to her home city of Xinxiang on March 5 under escort.

She was later formally arrested, and is being held in Henan's Xinxiang Detention Center on charges of "picking quarrels and stirring up trouble."

Li has also been warned off any further protests or petitioning activities.

Around 30 parents of children made sick by substandard and expired vaccines gathered outside the National Health Commission headquarters on Feb. 22, ahead of the annual parliamentary sessions in Beijing, calling on the government to deliver on earlier promises of assistance.

He Fangmei told RFA at the time that the parents-turned-activists were hoping to use heightened media attention around the National People's Congress (NPC) meeting in early March to publicize their families' grievances.

"We want the government to finish work on a Vaccine Law, taking into account suggestions from parents like us," she said. "That includes early intervention and treatment and guarantees in the longer term."

"We also want to see the health checks we were promised for our children implemented, and proper diagnoses made," she said.

But the authorities repeatedly detain, beat, and even "disappear" parent campaigners, who want the government to face up to its responsibilities and give the families hit by faulty vaccines compensation to help with mounting medical bills.

The Changchun incident was only the latest in a string of public health scandals surrounding fake, substandard, and expired vaccines that have had a devastating impact on the health of young children and on their immediate family.

Many parents say they were initially promised compensation and help with medical expenses, but that the assistance never materialized. Many are still seeking redress from similar scandals that occurred years ago.