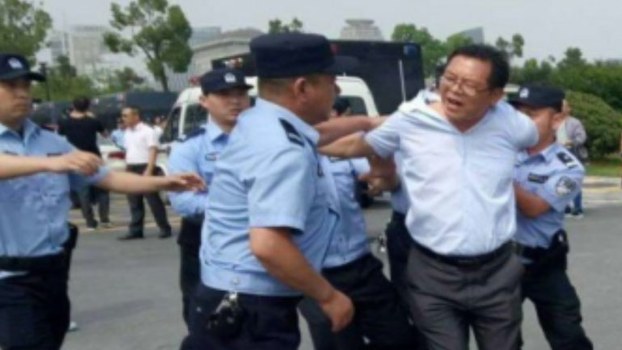 Screen shot of police roughing up a teacher during a a protest of around 200 former teachers gathered outside government offices in Lu'an city in eastern China's Anhui Province, May 27, 2018.

More than 100 retired teachers in the eastern Chinese province of Anhui have protested for the second time in a week after the local government claimed it owed them no money.On Sunday, around 200 former teachers gathered outside government offices in Anhui's Lu'an city. Police were sent in to disperse the crowd, and detained 16 people, treating many with excessive force, sources said at the time.While the government later apologized for the "rude behavior" of some of its police officers, it claimed that the teachers were owed nothing.More than 100 teachers protested on Wednesday to the Lu'an municipal government building, led by a retired school principal, demanding to be paid their bonuses in full."More than 100 retired teachers of Lu'an city gathered outside the municipal government officers, led by a retired principal," a source close to the protest told RFA. "They were of the opinion that the government hadn't paid them the money it owed them.""They were also protesting at the violent treatment meted out to the teachers who had gathered there before, and the refusal of the authorities to allow them to engage in online debate after the incident occurred," the source said.China's government censors deleted social media posts related to the incident soon after posting, local residents said."The government also tried to make the teachers sign something saying that all money owing to them had been paid," the source said. "For all these reasons, they went back to the city government to demand an explanation."After gathering outside and singing songs, the group was escorted to the city government's complaints department by officials, the source said.Another source said that while Sunday's protest was largely carried out by "minban" teachers on non-civil service contracts, Wednesday's protest was made by teachers with civil-servant status, at least in part in solidarity with their colleagues.Teachers in China can be hired on civil service or non-civil service (minban) contracts, and those employed on the latter frequently complain of wages that are below a minimum living standard and that often go unpaid for months.They also complain of a lack of pensions and other benefits after retirement, or when they are laid off.A retired "minban" teacher from Anhui who gave only his surname Wu said Wednesday's protesters were, unlike the earlier group, employed on civil-service contracts."These are all civil-service teachers, who haven't received the money they should have received owing to some financial difficulties or other factors at city hall," Wu said. "They want their money from the government."He added: "I don't know what the government is thinking here. People are expected to live in penury but aren't even allowed to complain?"China's parliament passed a 1994 requiring local governments to convert all "minban" teachers to civil-service terms, but they have been reluctant to do so."They have dragged their feet for so many years when it comes to us minban teachers," Wu said. "Every year, they say it'll be different next year, but everything still stays the same after all of these changes'."According to the Hong Kong-based China Labour Bulletin (CLB), Sunday's protesters hailed from Jinan and Yu'an districts of Lu'an, where civil servants had received a one-off performance bonus that wasn't extended to teachers."As of November 2017, no teachers in Lu’an had received performance bonuses while over half the districts had paid their civil servants," CLB cited a leaked provincial education bureau document as saying.Of the 13 cities in Anhui that had issued performance bonuses, only five had paid teachers the same amount of money as civil servants, while six cities hadn't paid them anything at all, the group said in an article on its website.A similar situation was reported at the county and district level, it said.The Lu’an government had said after Sunday's protest that all teachers in its jurisdiction had been fully paid according to national and provincial laws and that “there is no wage arrears problem” for elementary and secondary school teachers.According to CLB: "The lack of proper implementation at the local level of national education policies, especially those contained in the Teachers Law, has been a longstanding cause of dissatisfaction among teachers; not just in Anhui but in nearly all less developed provinces that under-invest in education."The group cited ruling Chinese Communist Party newspaper the Guangming Daily as calling the non-payment of teachers’ salaries and benefits "unconstitutional, in breach of the Teachers Law and Civil Law."Meanwhile, party mouthpiece the People’s Daily demanded to know the reason for the non-payment of wages and other benefits in Anhui, it said.Reported by Yang Fan for RFA's Mandarin Service. Translated and edited by Luisetta Mudie.