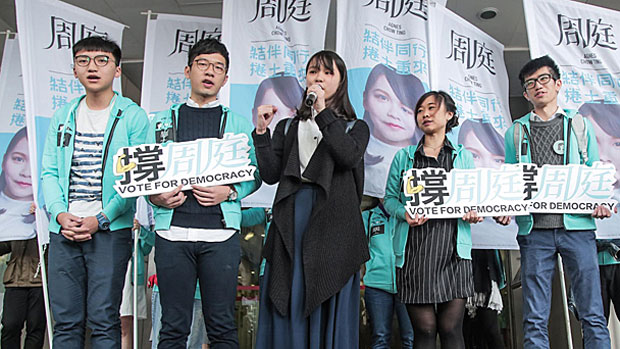 British Prime Minister Theresa May began a three-day visit to China on Wednesday amid calls for her to raise concerns over the rule of law and human rights in Hong Kong with its leaders.

May, who is seeking a trade deal with China to bolster the British economy ahead of the country’s exit from the European Union in 2019, has said she will “raise those issues” with President Xi Jinping when she meets with him, but declined to give further details.

Instead, she said her visit would “intensify the golden era in U.K.-China relations,” using a buzzword that echoes Xi’s “new era” of political thought ushered in at the national party congress last October.

As she prepared to leave, former Hong Kong colonial governor Chris Patten urged May to address concerns about the political situation in Hong Kong, where a pro-democracy candidate in a forthcoming legislative by-election was barred from standing on the basis of her political views, sparking sharp criticism from senior lawyers, who said her basic rights had been violated.

Patten wrote in a joint letter with Liberal Democrat lawmaker Paddy Ashdown on Monday, asking May to “go on insisting on the continued validity of the Sino-British Joint Declaration and the principles of ‘one country, two systems.'”

China last year dismissed the 1984 Sino-British Joint Declaration as a "historical document.” But U.K. officials say it is a binding bilateral treaty registered at the United Nations, and that the U.K. has a duty to ensure Beijing honors it.

“In the past five years Hong Kong has seen increasing threats to the basic freedoms, human rights and autonomy which the people were promised at the handover just over 20 years ago,” Patten and Ashdown wrote.

“We hope… that you will be able to provide the people of Hong Kong with some assurance that our developing relationship with China, vital though it is, will not come at the cost of our obligations to them,”
the letter said.

It cited a recent move by China’s parliament that will effectively impose mainland laws in a Hong Kong high-speed rail terminal, which is currently under construction.

The dual checkpoint has sparked fears that Hong Kong’s status as a separate legal and policing jurisdiction is under threat.

It also noted with concern that Hong Kong chief executive Carrie Lam had referred to a human rights report written by Ashdown as a form of “meddling by foreign organisations.”

Lam hit out at the letter, saying its position was “unfounded and unfair.”

Earlier, she defended the barring of Demosisto candidate Agnes Chow from a Legislative Council (LegCo) by-election, saying that "certain political viewpoints" were in breach of the Basic Law.

"Support for Hong Kong independence or local autonomy is the most serious of these sorts of opinions," she said. "People can choose to hold such views, but they don't comply with the legal requirements [to stand for election.]"

The European Union this week accused the Hong Kong government of violating an international human rights treaty by barring Chow from the Legislative Council (LegCo) by-election on the grounds of her political opinions.

It said the move “risks diminishing Hong Kong’s international reputation as a free and open society.”

“The protection of civil and political rights in Hong Kong is an essential part of the implementation of the ‘One Country, Two Systems’ principle, which the EU supports,” the statement said.

While Lau has publicly changed his mind about independence for Hong Kong, an EAC official said he had only done so reluctantly and out of political expediency, and that he is insincere about upholding the Basic Law.

Former lawmaker Nathan Law, who lost his LegCo seat when his oath of allegiance was found invalid by a Hong Kong court, said the barring of election candidates was unacceptable.

“No Hong Kong resident should be deprived of their right to take part in elections; this is a violation of their basic human rights,” Law said. “This decision is of course unreasonable, because it is a naked form of political censorship.”

“It doesn’t matter how they wrap it up in legalistic talk of not upholding the Basic Law: these acts of political censorship violate the international human rights covenant,” he said.

He said his party, Demosisto, and the 2014 pro-democracy movement that preceded it, had always been peaceful and rational.

Six pro-democracy lawmakers including Law have been stripped of their seats in LegCo by Hong Kong courts since 2016 after a high-level intervention by China’s parliament, the National People’s Congress, which judged their oaths of allegiance to be insufficiently “solemn and sincere” after they changed the wording or displayed slogans during their swearing-in ceremonies.

The U.K.-based rights group Hong Kong Watch, whose founder Benedict Rogers was denied entry to the city last November, said on Tuesday it was “gravely concerned” by the disqualification of Agnes Chow.

Rogers said the group is taking legal advice on the barring of Chow.

“[We have] grave concerns that it may constitute a violation of Hong Kong’s Basic Law,” Rogers said in a statement, in a reference to Hong Kong’s mini-constitution.

“We fear that the government of Hong Kong may be abusing the legal system for political gain, by undermining pro-democracy voices,” he said.

“Agnes Chow’s disqualification is yet another example of the erosion of freedom of expression and the political rights of Hong Kong people,” he said.

Reported by Wen Yuqing and Lam Kwok-lap for RFA’s Cantonese Service, and by Gao Feng for the Mandarin Service. Translated and edited by Luisetta Mudie.

Why don't you self-immolate for Hong Kong?

I sense from the silence in the world's press that Mrs May said nothing in defence of HK's freedoms and nothing about any aspect of the CCP's increasingly oppressive governance generally. If I am quite wrong on this, I am eager to know what exactly she did say; if I am right, I am ashamed to have her as a Prime Minister.