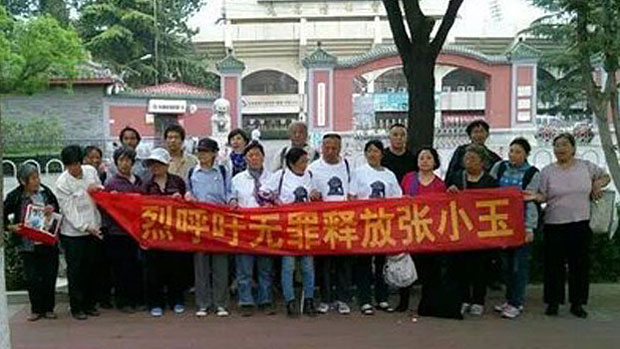 Petitioners in China urge clemency for Xu Youchen in an undated photo.
Photo provided by an RFA listener

Authorities in the central Chinese province of Henan have executed a petitioner for killing a police officer who was forcibly escorting him home from a petitioning trip in the Chinese capital.

Veteran activist Xu Youchen, 58, was executed on Nov. 15 after the China Supreme People’s Court approved his death sentence the month before, according to London-based rights group Amnesty International, which had campaigned for a reprieve.

Xu and his wife Zhang Xiaoyu were initially both detained on suspicion of killing the police officer on July 17, 2014 as they were being escorted home from Beijing to prevent them from complaining about the local government.

The couple were both formally charged with intentional homicide on Aug. 2, but Zhang's charges were later changed to "picking quarrels and stirring up trouble," for which she received a three-year jail term on Dec. 12, 2016.

Xu was sentenced to death for the killing of a police officer on the same day by the Sanmenxia Intermediate People's Court in Henan.

At his trial, he admitted intending to injure the police officer, and his lawyers said the court had failed to prove that he intended to kill the man.

Rights groups have also cited procedural irregularities with the handling of the policeman's death.

Authorities cremated the body of the policeman allegedly killed by the couple just four days after he died, making it impossible to re-examine the exact time and cause of death, Amnesty International reported.

The Supreme People’s Court was asked to review the case, and approved the death sentence on Oct. 8, Amnesty said in a statement on its website.

"China is the world’s top executioner," the statement said. "Based on ongoing monitoring of developments in China’s criminal justice system, Amnesty International believes that China’s continues to execute thousands annually."

It said the ruling Chinese Communist Party has stopped publishing its estimated execution figures, as data on the use of the death penalty is classified as a state secret.

Slight revisions to the law to make executions less common have failed to bring China into line with requirements under international law requiring the death penalty to be restricted only to "the most serious crimes."

"Amnesty International opposes the death penalty unconditionally, in all cases without exception, regardless of the nature or circumstances of the crime, the guilt, innocence or other characteristics of the individual, or the method used by the state to carry out the execution," the group said.

"The death penalty violates the right to life, as recognized in the Universal Declaration of Human Rights, and is the ultimate cruel, inhuman and degrading punishment," it said.

Xu's defense had been based on the argument that he hadn't intended to kill the police officer, and his lawyer said the charge of "intentional homicide" was unjustified.

China's army of petitioners, who flood the ruling Chinese Communist Party's official complaints departments with more than 20,000 complaints daily across the country, frequently report being held in "black jails," beaten, or otherwise harassed, if they persist in a complaint beyond its initial rejection at a local level.

They are often escorted home forcibly by "interceptors" sent by their local governments to prevent negative reports from reaching the ears of higher authorities.