But Chinese authorities seize activist's writings and keep him under close watch at home.
2010-11-29
Tweet 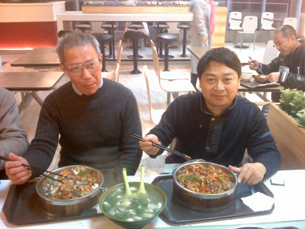 Authorities in the central Chinese city of Wuhan released a veteran pro-democracy activist on Monday only to keep him under tight surveillance at his home amid a number of restrictions.

Qin Yongmin was released after reaching the end of a 12-year jail term handed down in 1998 for "endangering state security" after he edited a human-rights newsletter and helped set up the banned China Democracy Party (CDP).

"I am extremely angry," Qin said on the day of his release, after being met by his daughter and other relatives at the Hankou Prison on his release.

Qin said prison guards and police had confiscated everything he had written during his 12-year sentence, including letters to his daughter that she had never seen.

"They were so cruel," he said.

"At about five in the morning, they went through every single thing I had written and confiscated it," Qin said. "I hung on and wouldn't let it go."

Qin said much of the material consisted of letters to his daughter, most of which she never received.

"There were more than a dozen police there, and they grabbed my arms and wrenched it away from me," he said. "They took more than 10 years' worth of writings from me."

Qin said that he was then transferred to his local police station, where he was warned not to give interviews to foreign media, and not to gather in groups of more than two people to talk or to eat.

"They made a lot of unreasonable demands," he said, adding that the police had stationed officers to watch his home 24 hours a day.

Qin's daughter A Dan said she was concerned for her father's health.

"His blood pressure is pretty high," she said. "He has aged a great deal, and he will need some time to readjust after so many years in prison."

Fellow activist Lu Xinhua said Qin had made a huge contribution to democracy in China. "But he has also paid a high price," he said.

"His health is poor, and life will be very hard for him ... They are unlikely to allow him to do anything," he said.

She also said she feared he might be held under house arrest even after his release, like many activists in the wake of jailed dissident Liu Xiaobo's Nobel Peace Prize award.

The 57-year-old Qin is a veteran dissident who was initially sentenced to eight years in prison for "counterrevolutionary propaganda and subversion" in the wake of the Democracy Wall movement in 1981.

A contemporary of exiled dissident Wei Jingsheng, Qin served a further two years' "re-education through labor" in 1993 after he penned a controversial document titled "Peace Charter."

By 1998, Qin was the editor of the Human Rights Observer newsletter, and one of a number of political activists who attempted to register the CDP.

He was sentenced to a 12-year prison term in 1998. Hangzhou-based CDP founder Wang Youcai and Beijing-based Xu Wenli received 11-year and 13-year jail terms respectively. Both were later exiled to the United States on medical parole.

Liu's wife, Liu Xia, and many of his colleagues are under a form of undeclared house arrest, a condition that isn't expected to end until after the Dec. 10 award ceremony in the Norwegian capital of Oslo.

Reported by Xin Yu for Radio Free Asia's Mandarin Service and by Grace Kei Lai-see for the Cantonese Service. Translated and written in English by Luisetta Mudie.