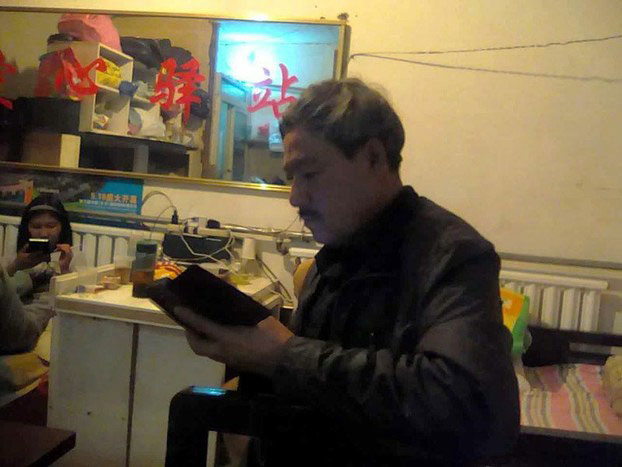 Chinese petitioner Pei Guodong, 61, who has been on hunger strike after being detained on Oct. 31 by Beijing police on suspicion of "picking quarrels and stirring up trouble," in undated photo.
Photo courtesy of an RFA listener.

Large numbers of people pursuing complaints against the ruling Chinese Communist Party have converged on Beijing ahead of the New Year's Day national holiday on Friday, when they hope to make their grievances heard, petitioners told RFA.Groups of petitioners from Shanghai, Shandong, Sichuan and across China are gathering outside the State Council complaints office in Beijing to pursue a number of mass petitions linked to forced evictions, land loss to development, official corruption and abuse of official power."I plan to petition in Beijing on Jan. 1," Sichuan petitioner Yuan Ying told RFA from a train en route to the capital. "There are eight of us going this time, all of us with complaints about land grabs and forced demolition and eviction.""Some of us have been petitioning for more than a decade."Yuan said the group would lodge their complaints with China's cabinet, the State Council."After that we will go to the Central Commission for Discipline Inspection and to the Beijing municipal police department," Yuan said. "We will complain to all of them.""We want to make our grievances known."A similar group was en route on Wednesday for Beijing from the eastern province of Shandong, petitioner Lu Qiumei told RFA."Chinese people think New Year's Day is an important day, because it is the first day of the new year, and marks a new beginning," she said."They hope that their grievances will be heard, and that the government will address them as soon as possible, so they can resume a normal life," Lu added.

Meanwhile, a group of herders from the northern region of Inner Mongolia said they had recently lodged a petition in the regional capital, Hohhot, over the loss of their traditional grasslands to develop and exploitation by Chinese companies.But petitioners are frequently targeted by the officials they complain about, who summon them for questioning, beat, detain and otherwise harass them.Caixingga, a herder from Inner Mongolia's Urad Middle Banner, said he had received a summons from local police after his trip to Hohhot."I went to Hohhot to fill out the papers with Xinna, before posting them online," Caixingga said, in a reference to the wife of veteran ethnic Mongolian dissident Hada."This morning, the security police called me and asked if I went to Hohhot and I said yes, and they asked me to go there, but I said I wastoo busy," Caixingga said."Then the deputy chief of police for Urad Middle Banner called me half an hour later and spoke very harshly to me, telling me to go down there."Sichuan-based activist Huang Qi, who founded the Tianwang rights website, said Jan. 1 marks the start of the petitioning season in China, which lasts through the Chinese New Year holiday, regional People's Congresses, until the end of the National People's Congress (NPC) annual session in March.Petitioners, some of whom also take part in anti-corruption activities and citizen reporting on rights-related issues, often readily offer their support to other causes, including fellow petitioners held in unofficial "black jails," detained rights lawyers and activists and last year's pro-democracy movement in Hong Kong."The so-called Occupy Central movement was the target of official criticism in mainland China, and a lot of people expressing support for Hong Kong were locked up," Huang Qi said.Huang cited the case of Chengde petitioner Pei Guodong, 61, who has been on hunger strike after being detained on Oct. 31 by Beijing police on suspicion of "picking quarrels and stirring up trouble.""He has also done a lot of rights activism as well, so the authorities are using this as an excuse to detain him," Huang said.Pei was initially held on a 15-day administrative sentence, which can be handed down by police to perceived trouble-makers for up to 15 days without trial.

This was commuted to criminal detention on Nov. 14, and Pei was formally arrested and charged by state prosecutors in Hebei province's Weichang Manchu and Monggol autonomous county on Nov. 21, his son Du Yanwei told RFA."He has been refusing food since Nov. 14," Du said. "They are force-feeding him with an intravenous drip.""He has got a lot thinner ... he hasn't shaved or cut his hair, and there are surveillance cameras in his hospital ward," Du said. "There is also an iron grille on the windows, and on the door."Du said Pei was on hunger strike in protest over what he described as a "miscarriage of justice."According to the indictment against Pei, he took a photo of himself holding a banner on Oct. 1, 2014, shortly after the start of the Occupy Central pro-democracy movement in Hong Kong, which read: "Unequivocal support for the people of Hong Kong in their fight for democracy and universal suffrage."Pei had then sent the photo to the Weiquanwang rights website, "causing serious disruption to public order," the indictment said.The indictment also mentioned Pei's long-term petitioning activities during the 1990s."There is ample evidence to show that the material facts of Pei Guodong's crimes are clear, and that his actions have harmed public order," the indictment said.Pei's lawyer Li Weida said his client is being targeted for political retaliation, and hasn't broken the law."Maybe the Beijing government fears a chain reaction from the campaign for universal suffrage in Hong Kong," Li said. "Hong Kong and Taiwan give people in mainland China a preview of democratic politics, and the government is afraid that it could spread.""But Pei Guodong didn't break the law in showing his support for Occupy Central," Li said. "He is just a citizen who exercised his rights to freedom of expression.""The prosecution service is in violation of the rights of its citizens, in claiming that he broke the law."Reported by Qiao Long for RFA's Mandarin Service, and by Ho Si-yuen for the Cantonese Service. Translated and written in English by Luisetta Mudie.