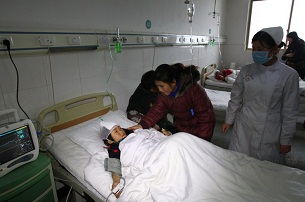 A girl stabbed in the Guangshan attack lies in her hospital bed two days after the incident on Dec. 16, 2012.
AFP

Authorities in the central Chinese province of Henan say a man detained in connection with last week's primary school knife attacks was "influenced" by doomsday predictions, while the country's state-run media focused more closely on the school shootings in the United States.

Officials in Henan's Guangshan county, where 23 primary schoolchildren and an elderly woman were stabbed with a kitchen chopping knife on Friday, said that suspect Min Yongjun had been detained in connection with the attack after being stopped after the attacks by teachers and police.

"We have had approval for the formal arrest of the suspect in the Dec. 14 attacks," a spokesman for the county police department said on Monday. "Originally it was reported that 22 children were hurt, but now that number is 23."

"All those who were injured were elementary school children."

Health officials said that none of those injured was currently in a critical condition, although some had been transferred to larger hospitals in Henan and neighboring Hubei provinces, the Global Times newspaper, which has close ties to the ruling Chinese Communist Party, reported.

Most of the children were suffering from head injuries or cuts to their fingers or ears, and had undergone immediate surgery, it said.

According to the Associated Press, officials said Min appeared to be "psychologically affected" by doomsday predictions that the apocalypse will come on Friday, although further psychological evaluations were under way.

Min burst into the home of an elderly woman early Friday, hitting her and stabbing her with a kitchen knife he found there, before rushing next door to the Chenpeng village school and attacking 23 children there, official media quoted police as saying.

"Initial police investigations found that Min, a long-term epilepsy sufferer, had been strongly psychologically affected by rumors of the upcoming end of the world predicted by ancient [Mayan] prophecy," the state news agency Xinhua said. 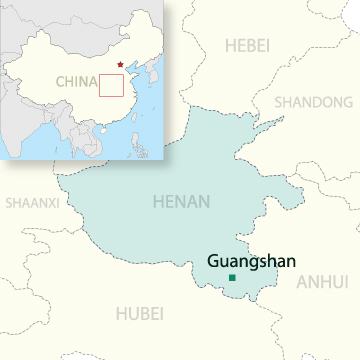 Meanwhile, Chinese netizens reacted with sadness over the U.S.'s Connecticut massacre, in which 20 children and six adults died in a shooting rampage at a school on Friday, but expressed anger over the official silence surrounding China's own school attack.

Hong Kong movie star Jackie Chan wrote on the popular microblogging service Sina Weibo:  "It's a sad day for the whole world. Children wounded and dead in Wanquan and Sandy Hook.... What's wrong with the world?"

More than six million Chinese netizens commented on some aspect of the attacks, which were trending topics on Sina's Twitter-like service.

But thousands also commented angrily at the Guangshan government, which scheduled and then canceled a news conference in the wake of the attack, with local officials making themselves unavailable to journalists, official media reported.

China's major newspapers carried reports about the Sandy Hook shootings on their front pages, but had scant coverage of the Guangshan tragedy, sparking anger over government controls on the media.

An employee who answered the phone at the Wanquan Elementary School said security had been stepped up in the wake of Friday's attacks.

"There is a security task force made up of teachers and school management, as well as security guards employed by the school ... who are patrolling the areas around the school gates," said the employee.

"[These patrols] escort the children to the gates at the beginning and end of school."

"Everything is locked when they are in class; safety is a priority," the employee said.

In 2010, China's central government ordered a nationwide security clampdown around schools after a string of deadly attacks on young children and staff in kindergartens.

The order came after a man went on the rampage with kitchen cleaver at a Shaanxi kindergarten, leaving nine people dead, seven of them small children.

The Chinese public was still reeling after the horrific attack, which left children as young as three years old with deep cleaver wounds to the head, when a second attack in Shandong's Zibo city killed three kindergarteners.

Experts have blamed growing social tensions, a widening gap between rich and poor, and associated mental health problems for the spate of attacks.

Retired Shandong University professor Sun Wenguang said the Chinese public still had a number of questions that hadn't been answered after the attacks.

"Why were there no guards on the door of the school, and if the perpetrator had such a serious mental illness, then how do they go about evaluating people with serious mental health problems in Guangshan county?" he said.

"Those who have genuine psychiatric problems [in China] aren't getting treatment, while some political dissidents are locked up in mental hospitals by the police and the government," Sun said.

China has launched a clampdown in recent days on a doomsday sect in the central cities of Zhengzhou and Wuhan, detaining more than 50 people for handing out leaflets claiming that the world will end on Friday, and designating the Quanneng doomsday sect an "evil cult," sparking mass demonstrations last week.

Reported by Xin Lin and Gao Shan for RFA's Mandarin Service. Translated and written in English by Luisetta Mudie.