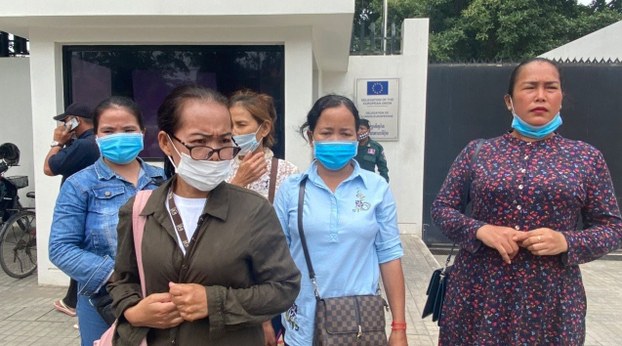 The wives of detained members of Cambodia’s banned opposition party met with European Union embassy officials Monday to appeal for help in freeing their husbands, as a ruling party spokesman shrugged off a looming EU threat to slap tariffs on around one-fifth of Cambodian exports to the bloc.

The banning of the Cambodia National Rescue Party (CNRP) in November 2017 was a major factor behind the EU’s decision to suspend tariff-free access to its market under the “Everything But Arms” (EBA) scheme for some 20 percent of Cambodia’s exports.

Tariffs on the country’s key garment exports will kick in on Aug. 12, unless it is overturned by the bloc’s governments or its parliament.

Hun Sen has said that EU demands for an end to the crackdown to maintain the EBA are an unreasonable encroachment on Cambodia’s internal affairs, and has continued to target CNRP members and other activists and critics.

Seventeen CNRP activists have been held in pretrial detention for “incitement to commit a felony or cause social unrest” since early this year after slamming Hun Sen’s leadership and his government’s response to the coronavirus pandemic.

“We will continue our protest until there is a political solution, citizens are able to enjoy freedom of expression, and civil society and journalists are fully able to perform their jobs,” Sok Polyma told RFA’s Khmer Service after the meeting.

Sok Polyma said that she and the other members of her group also asked EU officials to help secure the release of Cambodian labor union leader Rong Chhun, who was arrested Aug. 1.

Scores of Cambodian civil society groups have condemned the arrest of Rong Chhun, president of the Cambodian Confederation of Unions (CCU), demanding that the government release him and drop charges of “incitement” he faces over his criticism of the country’s handling of a border dispute with Vietnam.

Rong Chhun and the other activists now held in Prey Sar were arrested because they had committed crimes, he told RFA.

“These wives should advise their husbands not to do anything illegal. If both husband and wife conspire to commit illegal acts, they will be held responsible.”

“This is really very simple. If they commit crimes, they will be arrested,” he said.

Cambodia’s ongoing arrests of political opposition figures and social activists are not a matter of law enforcement but of political persecution, though, said Ny Sokha, head of the human rights unit for Cambodian rights group ADHOC.

If Cambodia’s government and ruling party continue on their present course, the country may suffer greater economic impacts in the future, Ny Sokha said.

“We may lose not only EBA trade benefits, but also development aid, especially from European countries,” he added.

The CNRP was disbanded by Cambodia's Supreme Court in November 2017 for its alleged role in a plot to overthrow the government.

The move to ban the CNRP was part of a wider crackdown by Prime Minister Hun Sen on the political opposition, NGOs, and the independent media that paved the way for the CPP to win all 125 seats in parliament in the country’s July 2018 general election.