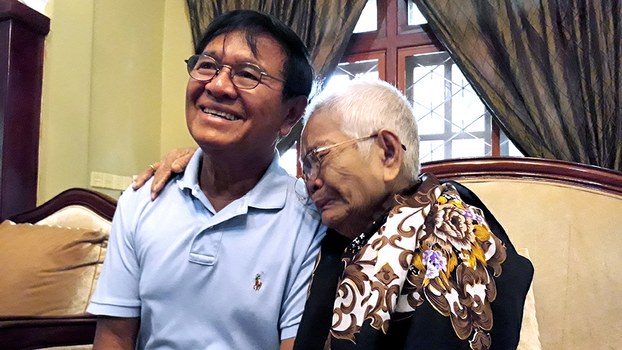 Cambodia's opposition leader Kem Sokha (L) sits with his mother Sao Nget while confined by the government at his residence in Phnom Penh, Sept. 11, 2018.

The United States called for the immediate release of Cambodian opposition leader Kem Sokha Tuesday in a statement issued one week after the second anniversary of his arrest.

“The Cambodian government has yet to try him or produce any credible evidence to back its claims, which were used to dissolve the main opposition party, the Cambodia National Rescue Party [CNRP], and to remove over 5,000 duly elected representatives from office,” said Ortagus, in the statement.

Cambodia’s Supreme Court banned the CNRP in November 2017 for its role in an alleged plot to topple Hun Sen’s regime, two months after police arrested Kem Sokha and accused him of planning a coup. The opposition leader faces up to 30 years in prison if convicted of treason, but no date has been set for his trial.

After spending one year in pre-trial detention, he was released with the conditions that he must stay within a block radius of his home, cannot meet with CNRP officials or foreigners, and cannot or host any rallies or political activities. He remains under de-facto house arrest.

“The United States again calls upon the Cambodian government to drop all charges against Kem Sokha, restore his civil and political rights, and free all those arbitrarily detained,” Ortagus said.

“We urge the Cambodian government to take concrete steps to promote reconciliation by allowing media and civil society to operate without fear of intimidation or reprisal for exercising their rights to freedom and expression and association under the law,” she added.

The Phnom Penh Post, a local English-language newspaper, published an article Tuesday in which a Cambodian government spokesperson said the State Department’s call for charges to be dropped against Kem Sokha was disrespectful to the law.

“This is just the feeling of those who have expressed their opinion. However, that opinion is not in line with respect for the law,” said spokesperson Phay Siphan.

“When we talk about respect for the law, we base it on questions of fact and law. So what they have said was made with a political agenda,” Siphan said.

Sok Eysan, a spokesperson for the ruling Cambodian People’s Party, said in the same article that the U.S. had the right to its opinion, but that it could not interfere due to Cambodia’s status as a sovereign state.

“Court procedure can’t be interfered with by anyone. We all, including foreigners, want independent courts carrying out its duties independently,” said Eysan.

Cambodia’s Ministry of Foreign Affairs also released a statement in response, taking issue with the call for Kem Sokha’s release.

“Since 9 September 2018, Kem Sokha was already released for humanitarian reason to remain in the comfort of his home with his family under court surveillance,” said the ministry, in a seeming denial that Kem Sokha is under house arrest.

The ministry rebuked the U.S. statement, implying that it signaled undemocratic overtures from the U.S. government.

“We wish to remind that the failed attempt to push for regime change through undemocratic means is not the exercise of fundamental human rights and democracy,” it said.

An independent court in Cambodia is an oxymoron. Kem Sokha is in indefinite house arrest and is not allowed any visitors so to say that he was released on humanitarian grounds is an affront to the constitution. CPP has not charged him and they still have no evidence of his violations other than an old video of him stating that American experts have given his advice. Fear and intimidation is the only thing keeping this crazed madman in power; he will one day be removed as the likes of Gadaffi and Saddam Hussein. Tyrants will have no place in Cambodia.

Local Newspapers is an affiliate of Xienhua of Communist China which is not an independent Newspaper. Koh Santepheap Newspapers is bought by xienhua too. Just for reading how they reflect China communism.