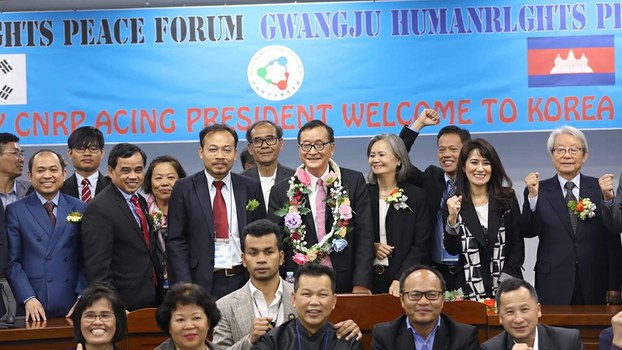 Acting opposition Cambodia National Rescue Party (CNRP) President Sam Rainsy has walked back plans to return to Cambodia from self-imposed exile by late next month, but said he plans to travel there before “the end of the year,” despite the threat of prison.

Sam Rainsy left Cambodia in late 2015 to avoid what are seen as politically motivated convictions on defamation and other charges, but has continued to actively shepherd the CNRP in exile. In early June, he announced that he had agreed to return to the country by September, following a decision by fellow party executives to go home to restore democracy in the authoritarian Southeast Asian country.

Last week, top-ranking officials with Cambodia’s security forces said they were arranging the deployment of authorities to all border checkpoints in anticipation of Sam Rainsy and other senior opposition leaders in exile, with orders to arrest them and escort them to jail.

Over the weekend, Sam Rainsy told RFA’s Khmer Service that he still hadn’t decided on an exact date for his return, but suggested it might no longer happen next month.

The opposition chief suggested that his announcement was intended to “mislead” Prime Minister Hun Sen and the ruling Cambodian People’s Party (CPP).

“Let [the ruling party] keep guessing what exact date I will be returning to Cambodia,” he said, adding that “five months remain until the end of the year” and his trip could “occur at any time.”

“Not disclosing the exact date will make Hun Sen feel confused and insane. The more bewildered and crazy he becomes, the sooner his regime will end.”

Authorities arrested CNRP President Kem Sokha in September 2017, and Cambodia’s Supreme Court dissolved the CNRP and banned 118 of its elected officials from politics two months later for its alleged role in a plot to overthrow the government.

Cambodia drew condemnation from Western governments following the election, with the U.S. imposing visa sanctions on officials seen as limiting democracy in the country and the EU launching a six-month monitoring period that ended Monday to determine whether Cambodia should continue to qualify for tax-free access to the European market under the Everything But Arms (EBA) trade scheme.

Both governments and international rights groups have called on Hun Sen to free Kem Sokha and reinstate the CNRP, in line with Cambodia’s purported political freedoms as a multiparty democracy.

Government spokesperson Phay Siphan said Tuesday that the ruling party is “not impressed” by Sam Rainsy’s statement about returning to Cambodia.

“Sam Rainsy is attempting to use psychological warfare to get attention from the government, but we want to let him know that it’s useless,” he said.

“We are not impressed, and we don’t care what he says.”

While Sam Rainsy has never set an exact date for his return, senior officials in the CNRP have consistently said that it would happen in “August or no later than September” this year.

CNRP supporters and activists across Cambodia and overseas have expressed support for Sam Rainsy’s return, and many have said they will escort his entry into Cambodia, despite threats from the government that anyone who assists him will also face arrest.

Kampong Cham provincial CNRP chief Than Sorith told RFA on Tuesday that local activists are “at the ready” to welcome Sam Rainsy’s return, adding that they anxiously await an announcement of the date he plans to do so.

Sam Rainsy’s announcement came as Grassroots Democratic Party (GDP) President Yeng Virak called on the government to free Kem Sokha, who is being held under de facto house arrest while awaiting a trial on charges of treason.

Yeng Virak urged authorities to release the CNRP president while speaking at an event over the weekend to commemorate the fourth anniversary of the GDP, saying that doing so would convince the EU not to withdraw EBA status for Cambodia.

The European Commission plans to present Cambodia with a report on its findings from the six-month monitoring period in November, after which it will make a final decision in February 2020 on whether or not EBA status will be withdrawn fully or in part. Suspension would come into effect by August 2020.

On Monday, the Garment Manufacturers Association of Cambodia (GMAC)—which represents the owners of Cambodian garment factories—urged the EU to preserve Cambodia’s EBA status, noting that the garment industry accounts for some 75 percent of the country’s exports and 90 percent of its goods shipped to the bloc, and warning that a withdrawal of the beneficial trade scheme would be disastrous for workers and their families.

It said that the garment industry directly employs 750,000 workers in Cambodia, while the EBA positively impacts the lives of some three million workers and their families in the country.

On Tuesday, political analyst Kim Sok told RFA that the only way Cambodia will avoid EBA withdrawal is if the government restores human rights and democracy, which he said had been “abused and undermined” over the past two years since Kem Sokha was charged with treason and the CNRP was dissolved, and while the general election was held with the exclusion of the main opposition party.

“If democracy is restored, EU pressure will subside,” he said.

Exports from Cambodia to the EU were valued at U.S. $5.8 billion last year, more than 95 percent of which came under the EBA. Some U.S. $4.5 billion was attributed to the clothing and textile industries, which stand to take the brunt of the damage from an EBA withdrawal.