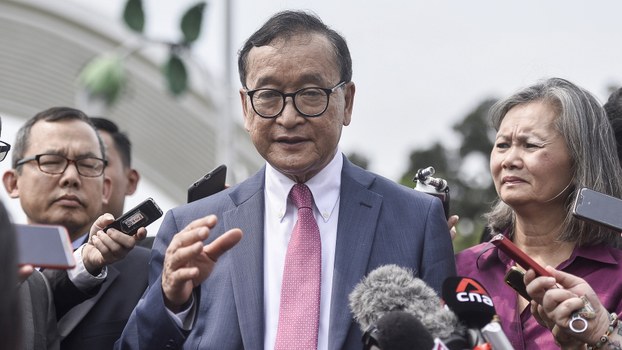 Sam Rainsy speaks with reporters after meeting with lawmakers at Malaysia's parliament in Kuala Lumpur, Nov. 12, 2019.

The European Union on Tuesday completed a preliminary report on the temporary suspension of trade privileges with Cambodia in response to democratic rollbacks by Prime Minister Hun Sen, drawing support from opposition leader Sam Rainsy, who said the bloc’s position could further his goals for the country.

In a statement, the European Commission (EC) said it had sent to Cambodian authorities the report which outlines the findings of an investigation launched in February under the procedure for a possible temporary withdrawal of trade preferences under the Everything But Arms (EBA) arrangement, which allows Cambodian goods tariff-free entry into the EU market.

While the EC did not outline the report’s findings, the investigation was prompted by what the EC has said are ongoing human rights and labor rights concerns in Cambodia that the government must demonstrate “real and credible improvement” on in order to avoid withdrawal of EBA preferences.

Under EU law, Cambodia’s government has one month to respond to the preliminary report, at which point the EC will finalize it and make a decision in February next year on whether or not to withdraw the country’s trade preferences.

In a tweet announcing the completion of the report on Tuesday, Cecilia Malmström, the European Commissioner for Trade, noted that the EC remains “very concerned about the human rights situation” in Cambodia.

As the second-largest beneficiary of EBA trade preferences, exporting 5.3 billion euros (U.S. $5.8 billion) worth of goods to the EU in 2018, Cambodia’s economy would be hurt by a loss of status, and particularly the lives of workers in the country’s textile industry, which accounts for around three-quarters of Cambodian imports to the EU.

On Tuesday, Sam Rainsy, the acting president of the Cambodia National Rescue Party (CNRP), told RFA’s Khmer Service that unless Hun Sen improves Cambodia’s rights record to satisfy the demands of the EU and maintain EBA status—reforms he is also seeking for the country—“hundreds of thousands of workers will lose their jobs.”

The CNRP chief, who has been living in self-imposed exile to avoid a string of charges and convictions he says are politically motivated, was blocked by Thailand’s government from using the country to enter Cambodia to lead a restoration of democracy through nonviolent protests on Nov. 9, but traveled to Malaysia over the weekend to meet with party officials and supporters, and plan his next steps.

Speaking from Kuala Lumpur, where he earlier met with around 20 lawmakers from Malaysia’s parliament, Sam Rainsy said that the CNRP wants the same things for Cambodia that the EU has asked for as a precondition to continuing EBA trade preferences.

“We would let the EU discuss [the EBA] with Hun Sen, as they are stronger [than the CNRP] and have the ability to negotiate with him,” he said.

“The EU, however, has not softened its stance and is clear [about its requirements] on the EBA issue for Cambodia.”

Among the conditions the bloc has called for is the dropping of all charges against former CNRP president Kem Sokha, who was arrested in September 2017 for “treason,” two months before Cambodia’s Supreme Court banned the party for its role in an alleged plot to topple the government.

The ban and a crackdown by Hun Sen on NGOs and the media paved the way for his ruling Cambodian People’s Party (CPP) to win all 125 seats in parliament in the country’s July 2018 general election.

Since Sam Rainsy in August announced his intention to return to Cambodia, authorities in the country have arrested and jailed many of those who have voiced support for the plan, which the government calls part of a “coup” attempt.

“The dropping of all charges [against Kem Sokha and others] is absolutely appropriate to allow all Cambodians to live in peace,” Sam Rainsy said, noting that while the government eased restrictions on the former CNRP president’s de facto house arrest, “it’s not enough,” because he remains barred from political activities and is still facing charges that could see him jailed for 30 years if convicted.

“The EU clearly stated that there must be dialogue and negotiation, and freedom must be returned to those who lost their freedom—not only a handful of political prisoners who are now in jail, but all Cambodians.”

Earlier, Sam Rainsy told reporters that Hun Sen is under pressure both internally, from CNRP supporters and members of the armed forced he said will back his bid for change, and externally, from the EU over the EBA, and that if the strongman “doesn’t want Cambodia to face an economic crisis” as a result of the withdrawal of trade preferences, he “must restore democracy.”

He expressed thanks to Malaysia for allowing him and other CNRP officials to stay in the country, and urged his supporters to be ready for his return to Cambodia, which he said “could happen anytime,” citing “indications of the release of Mr. Kem Sokha … [and that] measures against us can be temporary or partially lifted,” although he did not provide details.

“Here in Malaysia, we have many friends and like-minded people,” Sam Rainsy said after his closed-door meeting with the Malaysian lawmakers.

Sam Rainsy's comments came a day after the United Nations Special Rapporteur on the Situation of Human Rights in Cambodia, Rhona Smith, issued a statement welcoming the partial lifting of restrictions on Kem Sokha, but expressing concern over the continued ban on his political activities, travel outside of the country, and requirement that he present himself to authorities when summoned.

“The lifting of Mr. Sokha's house arrest is a progressive development, however I regret that the court order continues to limit his civil and political rights, in particular his freedom of movement and freedom of association,” she said, echoing her previous calls for a swift conclusion to the investigation into his case, or for the charges against him to be dropped.

Smith also expressed concern over the fate of at least 89 people who have been charged with “plotting against the State” and at least 52 people arrested in 20 provinces—many in connection with voicing support for Sam Rainsy’s planned return—bringing to more than 200 the number of cases of harassment, and judicial actions against CNRP members or supporters since the start of 2019.

“I reiterate my call on the Government and all parties to reduce escalations in tensions and seek dialogue in a peaceful environment that allows for diverging political voices to be expressed, and to avoid any further restrictions on the rights to freedom of opinion, expression and peaceful assembly,” she said.

Last week, Smith had issued a statement detailing her “grave concerns” about a heightened political crackdown in Cambodia, and calling on Hun Sen’s government to respect the rights to freedom of opinion, expression and assembly.

On Tuesday, Cambodia’s Permanent Mission to the U.N. Office at Geneva said it was “disturbed” by Smith’s new statement, which it said “renews a baseless demand … for individuals in conflict with the laws, despite the latest positive development on the ground.”

“The Special Rapporteur’s call for the court to swiftly conclude an investigation or to drop a charge is tantamount to an interference in the judiciary of Cambodia,” the mission statement said, adding that such a move could undermine the rule of law in the country.

“The revised terms of Mr. Kem Sokha’s judicial supervision resulted from his full compliance with the legal obligations and the court’s humanitarian consideration over his health situation. However, he will stand for a fair trial after the investigation is concluded.”

The mission suggested that Smith “continues to confuse right from wrong,” and said that the government’s actions against CNRP activists and supporters are in full compliance with Cambodian law and the country’s international obligations to protect civil and political rights.

It called for Smith to stop overstepping her mandate as Special Rapporteur, saying she is “not a judge to rule for any acquittal.”

Smith’s statement came on the same day that the U.S. Ambassador to Cambodia Patrick Murphy called for the full restoration of Kem Sokha’s freedom, saying that the easing of restrictions did not go far enough.