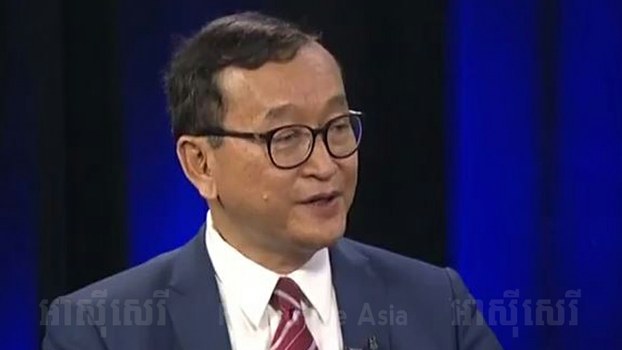 Cambodia’s exiled former opposition leader Sam Rainsy has officially launched a movement to keep his now-dissolved Cambodia National Rescue Party (CNRP) “alive” without fear of government reprisal, outlining an action plan with the objective of ensuring elections this year are free and fair.

Speaking to around 400 supporters in Long Beach, California on Sunday, Sam Rainsy—who has lived in exile since 2015 to avoid convictions widely seen as politically motivated—said that the new Cambodia National Rescue Movement (CNRM) “cannot be dissolved” because it does not need to register with the government, and will not be subject to monitoring by its ministries.

“This movement is very symbolic—it’s like a soul or spirit that cannot be dissolved, as it is not registered on paper,” he said, adding that the CNRM is a way around a ban on the CNRP, which was dissolved by Cambodia’s Supreme Court in November for its alleged role in a plot to topple the government.

“Anyone who has the same interests in rescuing our country from the dictatorship of [Prime Minister] Hun Sen can join it on their own volition.”

Sam Rainsy said the CNRP had been “paralyzed” by the court’s decision to dissolve it and ban 118 of its lawmakers from politics for five years, as well as the September arrest of current party President Kem Sokha on charges of “treason,” and suggested something needed to be done to “revive it” and pressure the government to reverse course ahead of a general election in July.

“A human body needs movement to stay alive and, likewise, the CNRP needs a movement like the CNRM to keep it alive,” he said.

“We have to move forward. We cannot silently allow Hun Sen to persecute us. What the CNRP cannot do due to persecution, the CNRM can step in to offer assistance.”

According to Sam Rainsy, the CNRM will operate according to an action plan that includes lobbying foreign governments to pressure Cambodia’s government and calling on influential companies to reconsider purchasing products from the country, given the “abuses of human rights and democracy committed by Hun Sen” and his ruling Cambodian People’s Party (CPP).

Domestically, he said, the CNRM will urge Cambodians “from all walks of life to rise up against the persecution.”

“We will call for peaceful protests by factory workers and other Cambodians to demand pay raises, respect for human rights and freedom of union,” he said.

“We will also appeal to the Armed Forces to refrain from shooting at our peaceful protesters and call on CPP members who condemn Hun Sen’s actions to join us in our fight for our country.”

Sam Rainsy said his decision to launch the CNRM was inspired by the movements for civil rights and freedom started by Mahatma Gandhi, Martin Luther King and Nelson Mandela.

The main objective of the movement, he said, is to free Kem Sokha and others jailed on politically motivated charges, and to ensure that Cambodia holds free and fair “inclusive” elections, in which the CNRP can fully participate.

Kem Sokha said in a statement issued through his lawyers last week that he was firmly opposed to joining the CNRM, according to a report by the Phnom Penh Post, although Sam Rainsy responded by saying the jailed opposition president was merely withholding support to protect himself.

After Sam Rainsy announced his intention to launch the CNRM earlier this month, Cambodia’s government said it would investigate the political movement and take legal action if it is deemed unlawful.

The Interior Ministry has rejected Sam Rainsy’s suggestion that the CNRM does not need to register with authorities and said the movement is masterminded by “illegal rebels” intent on revolt.

On Monday, Phnom Penh-based political commentator Meas Ny told RFA’s Khmer Service that the formation of the CNRM was to be expected, given the government’s crackdown on the opposition.

“The CNRP is responsible for the more than three million supporters who voted for it [in Cambodia’s June 2017 commune elections], but it is now dissolved, so if the party was to remain silent it would face criticism for abandoning its members,” he said.

“I can see this movement as an option for the CNRP to continue its activities while waiting for international pressure to take effect. It is also a move that can give its supporters hope. I consider it a form of psychological warfare that maintains the CNRP’s existence.”

Meanwhile, Sin Chanpov Rozeth, the popular former CNRP chief of Battambang province’s O’Cha commune, said she fears legal action after CPP lawmaker Chheang Vun suggested that the restaurant she opened in December, when she was removed from office amid her party’s dissolution, has been used to host activities aimed at overthrowing the government.

In a comment he made last week on one of Sin Chanpov Rozeth’s Facebook posts, Chheang Vun—who is also from Battambang and regularly confronted the opposition commune councilor after she was elected last year—claimed he had seen a number of CNRM supporters entering her shop and using it for political purposes, adding that such activities “must not be tolerated.”

Sin Chanpov Rozeth told RFA Tuesday she feels “worried and intimidated” by Chheang Vun’s comment, and said his threat “sends a bad message to other CNRP supporters who want to run a business for a living.”

“He cannot treat everyone who holds an opinion against his party as a ‘rebel,’” she said.

“I would like to ask His Excellency Chheang Vun to stop persecuting me. Leave me alone so that I can make some money to feed my aging mother. I’m running an honest business to make a living after my party was dissolved. I’m not involved in any so-called ‘rebellious activities’—I don’t even know what that means.”

The former commune chief said Chheang Vun “should be at ease” now that the CNRP is dissolved and she will not be competing with him in upcoming elections.

“If he still wants to compete with me, I think he should work on being able to cook a better noodle soup and make better food to earn customer satisfaction,” she added.

Chheang Vun didn’t respond to RFA requests for comment on Sin Chanpov Rozeth’s restaurant, but in a recent post to his Facebook account, the lawmaker threatened to publish photos of people at her shop who he believes are connected with the CNRM.

Chea Chiv, the former CNRP head of Battambang, told the Phnom Penh Post that party officials recently went to the restaurant to support Sin Chanpov Rozeth and help her make some money, adding that the group had “no other purpose besides eating, and are not rebels or doing any protests.”