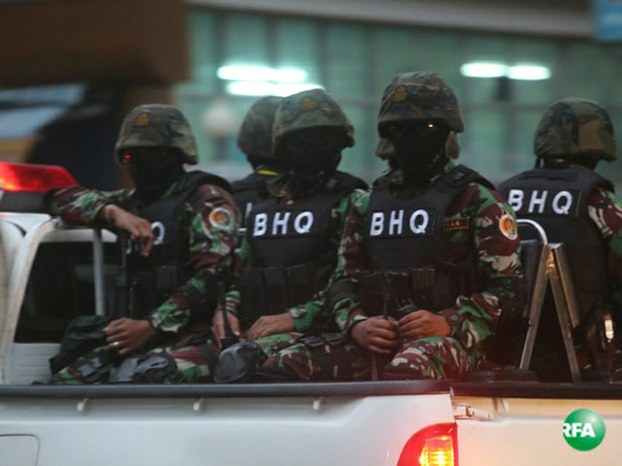 Armed forces in paramilitary uniforms and black masks patrolled the area around the opposition Cambodia National Rescue Party headquarters on Wednesday, in what CNRP leaders said is an attempt by the government to intimidate voters.

Helicopters circled in the air above the CNRP headquarters, boats with military personnel plied the water, and armed forces in vehicles and on foot cruised the streets around the building from about 10 a.m. to about 8:30 p.m. on Wednesday.

Standing in front of the CNRP headquarters in Phnom Penh, party spokesman Yim Sovann told reporters the show of force is a threat to Cambodian citizens just as voter registration in Cambodia starts on Thursday.

“They need to explain to the public via the media in order to allay citizens’ concerns and fears, because tomorrow is voter registration day,” he said. “We should create a conducive atmosphere without any threats.”

A defense ministry official dismissed the CNRP’s concerns, saying the operation was a routine military exercise that occurs every year.

The CNRP headquarters has become a symbol of resistance to a government that has been dominated by Prime Minister Hun Sen and his Cambodian People’s Party (CPP) for more than three decades.

In May, heavily-armed police searched the building in an attempt to arrest CNRP’s Acting President Kem Sokha for his failure to appear in legal cases related to his alleged affair with a young hairdresser.

Since then Kem Sokha has been holed up inside in virtual house arrest as the court issued an order preventing him from leaving the country.

The Kem Sokha cases are viewed by many inside and outside the country as part of a political strategy by Hun Sen to use the courts to attack CNRP members and other opponents and imprison or discredit them before elections in 2017 and 2018.

That strategy apparently took another turn on Wednesday as the Phnom Penh Municipal Court issued a new warrant for CNRP President Sam Rainsy.

Sam Rainsy left the country following the removal of his parliamentary immunity in November 2015 by the ruling CPP over a warrant issued for his arrest in an old defamation case. Kem Sokha was named acting president after Sam Rainsy left.

The new warrant accuses Sam Rainsy of being an accomplice to forgery and use of fake public documents and incitement in 2015 related to a controversy over Cambodia’s borders with Vietnam.

CNRP officials dismissed the new warrant, with Sam Rainsy telling the RFA Khmer Service TV that he will not play the game.

“This is communist language.  No one can say anything,” he said. “People just speak the truth, or just express their rights and they will be accused of incitement.”

Hun Sen’s relationship with Vietnam has been used by the opposition to raise questions about Hun Sen’s loyalties, and Hun Sen has attacked political opponents who have attempted to make it an issue.

Vietnam and Cambodia have had a fraught relationship for centuries, but the link that the opposition uses to try to embarrass Hun Sen dates from the 1979-89 Vietnamese occupation that ended the murderous rule of the Khmer Rouge.

Hun Sen emerged and was appointed during the period of Hanoi’s control over Cambodia.

As Cambodian foreign minister and then prime minister, Hun Sen played an important role in the 1991 Paris Peace Talks that brokered peace among Cambodia’s warring factions.

In April CNRP lawmaker Um Sam An was jailed after Hun Sen ordered police to arrest anyone accusing the government of using “fake” maps to cede national territory to neighboring Vietnam.

In 2015 police arrested Sam Rainsy Party Senator Hong Sok Hour after he posted comments on social media that claimed an article in the 1979 Cambodia-Vietnam Friendship Treaty was meant to dismantle, rather than define, the border between the two countries.

Although the Sam Rainsy Party merged with the Human Rights Party to form the CNRP, the party still holds seats in the Senate. It is expected to fully integrate with the CNRP after the next national elections.

Another Sam Rainsy Party lawmaker is also facing legal action as Hun Sen has sued Thak Lany and Sam Rainsy for defamation over remarks they allegedly made that tie the July 10 murder of critic Kem Ley to the prime minister.

Thak Lany denies she made the remarks, saying that her comments were edited to make her look like she was lodging the criticism.

On Wednesday a Cambodian senate committee met to consider whether Thak Lany’s immunity should be lifted.

The Cambodian constitution gives lawmakers immunity parliamentary immunity, but it can be lifted with a two-thirds of the national assembly.

“The permanent committee found that she did not accept her mistakes, accepted the fact that she said so but insisted that the video was edited,” said senate spokesman Mam Bun Neang said. “That’s why Samdech’s [Hun Sen] attorney filed a complaint to the court to take legal action.”

Teav Vannol, a Sam Rainsy party leader and a member of the senate’s permanent committee, told RFA that he requested the senate retain Thak Lany’s immunity.

“This is a minor issue of expressing one’s own idea that should be solved by simply apologizing in public rather than taking away her immunity,” he said. “It is not true, as the accusations in court assert, that there was an act of defamation and incitement that caused social unrest.”

He added: “It is an act of political pressure against the opposition party which will cause the political situation to become even more tense.”

The Phnom Penh Post, quoting two anonymous sources, reported that Thak Lany is believed to have fled the country.

Attempts to reach Phnom Penh court’s spokesperson Ly Sophanna for comment on the issue were unsuccessful.

While the CPP has dominated Cambodia for more than 30 years, it suffered a dramatic drop in support during the country’s last election in 2013, and analysts say it could see even more erosion in the upcoming elections.

Did everyone enjoy air show yesterday? CPP just showing what Cambodia has and in preparation to protect our border...LOL.

<<<A defense ministry official dismissed the CNRP’s concerns, saying the operation was a routine military exercise that occurs every year.>>>