Rights groups criticize the acquittal of a former governor.
2012-12-19
Tweet 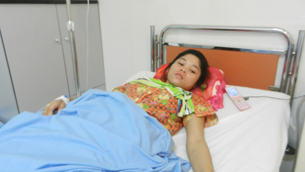 A provincial court in southeastern Cambodia has acquitted an ex-governor on a charge of unintentionally shooting three factory workers, drawing condemnation from victims and rights groups who said the case highlighted double standards of justice in the country.

The Svay Rieng court ruled on Tuesday that there was not enough evidence to prove that Bavet town ex-governor Chhouk Bandit had shot the three women in the Feb. 20 incident, dropping the charge that he had caused “unintentional injury” to them.

The decision was criticized by rights groups and victims who wanted Chhouk Bandit to be charged with premeditated murder.

Prime Minister Hun Sen had also issued a subdecree removing Chhouk Bandit as governor about a month after he allegedly fired into a crowd during a demonstration over labor conditions at a plant that supplies shoes to European sportswear giant Puma.

When Chhouk Bandit was first charged in March, Svay Rieng court prosecutor Hing Bunchea had said that investigations showed that the ex-governor had not intended to injure the three women, basing his decision on testimonies of victims and witnesses.

Hing Bunchea told RFA’s Khmer Service on Wednesday that he had submitted the charge to the investigating judge and the judge had decided there was “not enough evidence” of Chhouk Bandit’s involvement.

He said that just because charges had been brought against Chhouk Bandit, that did not mean the judge had to agree with them.

He added that the shooting victims should appeal the ruling in court if they are unsatisfied.

The three women filed an appeal against the court’s ruling on Wednesday, their lawyer told the Agence-France Presse news agency.

In Chhouk Bandit’s place, court has charged a police officer with involuntary bodily harm over the incident, she said.

On Wednesday, rights groups condemned the acquittal as unjust and said it highlighted how the country’s justice system allows impunity for Cambodia’s political elite.

“This shows that the justice system that is not equal,” local rights watchdog Licadho supervisor Am Sam Ath told RFA’s Khmer Service.

“It means that rich criminals can escape the law.”

He added that there was eyewitness evidence of the shootings.

The three factory workers—Bun Chinda, Keo Nei, and Nuth Sakhorn, aged between 18 and 23 at the time— had sought nearly U.S. $100,000 in compensation for medical bills and other damages.

The victims said that before they filed the charges against Chhouk Bandit, they had been approached by his representative who offered them each a settlement of U.S. $1,000 to $2,500 to drop the case.

The three belong to the Free Trade Union, which is planning a mass demonstration next week over the court’s ruling, according to the group’s president Chea Mony.

“We will seek justice for the victims,” he said.

Ou Virak, president of the Cambodian Center for Human Rights, said the case should prompt Puma, which gets its supplies from the Taiwanese-owned Kaoway Sports factory in Bavet where the shooting occurred, to reconsider its investment in the country.

He urged Puma, which following the incident had criticized the violence, to pull out of the country entirely.

“Otherwise … their brand will be forever stained with the blood of these poor garment workers,” he said.

It's ridiculous to heart court saying "unintentional injury". That's UNACCEPTABLE. He wielded a gun and took the shot on the crowd. Where amongst these facts that aren't so clear to you stupid JUDGE heads?This is clearly against the human right laws and the Cambodian institution. but nothing is done to Chouk Bandit.

we are compair chukbondit guy and mr momsonondo... what's happen show? chukbondit he is gunment and hunting people in poplice place a lot people see him now he live free but mr momsonondo just talk about fredom ,humentright now he in prison .question :where law ? where humentright? in cambodai now.

They should people like a dog !
This is a regime funded by the donner counties like China, Japan, France, Norway, Australia, UK, US, Germany....
When is time to stop supporting such a democracy in Cambodia ? ?

in cambodia now no fredom court, they obey hunsen govervent