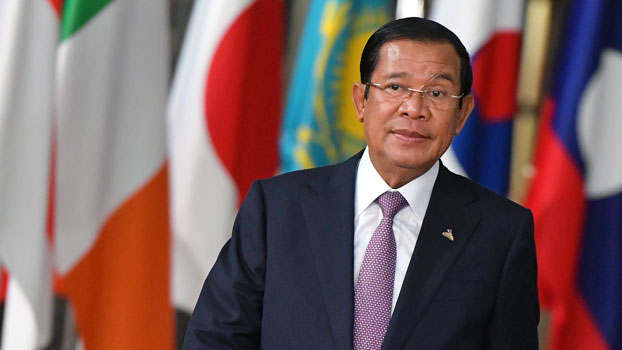 Cambodia's Prime Minister Hun Sen looks on as he arrives for a Asia Europe Meeting (ASEM) at the European Council in Brussels, Oct. 18, 2018.
AFP

Cambodian Prime Minister Hun Sen on Thursday waived off concerns over pressure from the European Union to improve the country's human rights record or risk losing its preferential trade status, saying that his government is prepared to pay additional taxes and make a profit even without the trade scheme.

The European Commission (EC), the EU’s executive branch, launched an investigation in February into Cambodia’s rights record to determine whether it would withdraw the country’s Everything But Arms (EBA) status, which gives developing nations tariff-free access to the bloc’s markets for all products except arms and ammunition.

In a confidential report issued on Nov. 12 and obtained by RFA through official sources, the EU warns Hun Sen’s government that it has not taken enough measures to prevent a loss of its special trade privileges, noting the country’s further deterioration of civil, political, labor, social, and cultural rights since the launch of the review process.

The EU has given Cambodia one month to respond to the preliminary report, at which point the EC will finalize it and make a decision in February 2020 on whether to withdraw EBA status.

“We have prepared since March,” Hun Sen said, referring to the potential loss of the tariff-free scheme.

“We don’t want to lose it, but they want to use it in exchange for our independence,” he said.

“If they say we need to pay taxes, we will pay, [and] we will still make a profit but only less than before,” he added.

The authoritarian leader said Cambodia should maintain its honor and integrity by not bowing its head — a sign of deference in the Southeast Asian country — to the EU over tax exemptions.

Hun Sen cited the example of rice exports to the EU, saying that investors would continue to make a profit even if they have to pay export taxes.

According to a report by the Secretariat of One Window Service for Rice Export Formality, a joint private government working group, Cambodia’s rice exports have dropped to almost 600,000 tons in the last 10 months compared to the level they were in 2018 when the EU started taxing the country’s rice.

Hun Sen said that if Cambodia continues to accept the EBA, the country will still receive instructions from the EU about how to manage its internal affairs.

“We will do what we can do,” he said. “There are still markets, only now we would need to pay taxes.”

But Cambodian workers say they are the ones who have already started bearing the burden of the EU action.

Khun Tharo, program coordinator for Cambodia’s Center for Alliance of Labor and Human Rights, said that Hun Sen’s comments are just a political statement and that the government will be shocked at the amount of revenue it will lose once the EBA is gone and employers in Cambodia must pay higher taxes to the EU.

“The government’s ability to collect taxes will be affected, and the private sector will also be affected,” he said.

Cambodia is the second-largest beneficiary of EBA trade preferences, accounting for more than 18 percent of all imports to the EU market under the EBA scheme in 2018.

Clothing and textiles account for around 75 percent of EU imports from Cambodia.

The EU launched the process to strip Cambodia of its preferential trade terms following the arrest of opposition Cambodia National Rescue Party (CNRP) President Kem Sokha and the banning of the popular party ahead of elections last year.

The Phnom Penh Municipal Court eased restrictions on Kem Sokha’s de facto house arrest earlier this month, although Hun Sen says he must still face treason charges, which could result in up to 30 years in prison.

Hun Sen is right the country will survive without Preferential Trade Status that the EU, US and any other free world countries that do business with Cambodian, Thailand, Laos, Vietnam and China because of high consumers demand from you, me and the rest of folks from SEA and others nation that consuming such products from Asia. We will be the one ended up paying the ultimate high price for things we wanted to use and consume. I would say if the an open dialogue failed, individual consumer boycott method from receiving countries would be the only way for such country to react and possibly change on human right and etc...

Of course the one-eyed dictator shrugs off because he doesn't care. EU, what are you waiting for ? Cambodia is not your brothers nor your sisters country. Let you do the same. Shrug them off!

If Cambodia would pay EBA taxes after EBA go in effect on February 20, 2020. BUT The EU consumers consider human rights and will NOT buy Cambodia products. Khmers will lose jobs consequently their family go poor and lose properties. Imperialist China will gain business sector in macro and microeconomics.

China is not in Cambodia for help or charity, but to control its resources. Example: P.Penh city buses are from 3 countries. Those, used ones, from South Korea and brand new from Japan use natural gas which are not polluted air and safety at high standard. Those, China donation use diesel which pollute air Cambodians inhale and do not have safety standard. China kill Cambodians slowly.