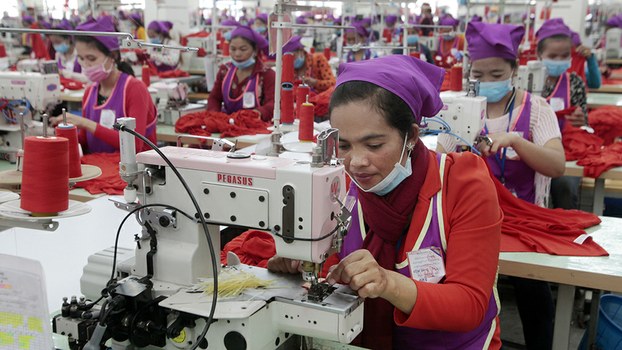 Garment workers sew clothes in a factory outside of Phnom Penh, Aug. 30, 2017.

Cambodia’s garment industry received a shot in the arm this week as more than 200 containers from China arrived in the country carrying raw materials, easing the shortage of inputs that idled factories in the wake of COVID-19 epidemic.

The port’s director told the Post that 15 ships carrying more raw materials are scheduled to arrive each week.

Without the emergency raw materials delivery, the Cambodian economy could implode, economists warned.

According to Hong Kong-based Asean Briefing, the garment industry is Cambodia’s largest employer with more than 600,000 workers. It accounts for 16 percent of the country’s GDP and 80 percent of its earnings from exports.

The containers delivered Monday are only a fraction of the raw materials needed to keep making clothes at the scale necessary to drive the growth of Cambodia’s economy.

“For the time being, we still need more raw materials than what has recently been shipped from China,” Ken Loo, the general secretary of the Garment Manufacturers Association in Cambodia (GMAC), told RFA’s Khmer Service.

“As long as the materials are shipped to us on a regular basis, we will be fine. But normally we need around 1,200 containers each week,” he added.

Kun Nhim, director of the country’s customs authority told RFA Wednesday, “Since Monday more containers have been arriving. We processed 64 on Monday and 160 more on Tuesday.”

“Today we got 242 containers and we expect more in the next few days,” he added.

It was not immediately clear how many more containers were expected to arrive before the end of the week, or how many Cambodia requested that China send.

Hi! I work at a Swedish museum and wonder if we are free to use the following photograph (from your web page) in a mini exhibition about the fashion industry. The purpose is educational.