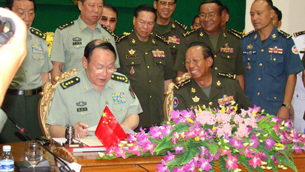 China will establish a military training facility in Cambodia and provide other defense aid to its Southeast Asian ally in agreements struck during a visit this week by the Chinese defense minister Liang Guanglie to Phnom Penh, officials said.

Liang also met with his counterparts from the Association of Southeast Asian Nations (ASEAN) to defuse tensions over territorial disputes in the South China Sea, they said.

Under an agreement signed on Monday by Liang and his Cambodian counterpart Tea Banh, Beijing will provide its southern neighbor with U.S. $17 million in military aid and construct a military training facility in the country.

Tea Banh called the bilateral agreement “extremely important” for Cambodia in a press briefing in Phnom Penh after the signing ceremony.

“The Chinese minister has agreed to accept Cambodian military officers for military training in China and also to train as instructors,” Tea Banh added.

“China will also assist by providing medical supplies for the Cambodian military,” he said.

Tea Banh said Liang's visit was beneficial to strengthening relations between the two countries across all sectors, but particularly in terms of military ties.

He called Chinese assistance a “great contribution to improving the Cambodian army's capacity in national defense."

During the signing ceremony, the two ministers pledged to support each other on the international stage.

But he said that while the agreement would likely improve development in Cambodia, “the government has failed to monitor the quality of the aid projects” and how they might effectively be implemented.

Liang arrived in Phnom Penh on Sunday for a four-day official visit, during which he was also expected to meet with Prime Minister Hun Sen and visit the Angkor Wat world heritage site in western Cambodia’s Siem Reap province.

The meeting was held on the sidelines of the Sixth ASEAN Defense Ministers Meeting (ADMM) underway from May 28-30 in Phnom Penh. Cambodia is currently chair of the regional organization.

“We will have a short, unofficial meeting to discuss the issue,” Tea Banh told reporters ahead of the sit-down.

Indonesia, Laos, Burma, Singapore, and Thailand—the other members of the 10-nation ASEAN body—were initially expected to join the meeting, but ultimately Beijing met with countries with competing stakes in the South China Sea.

China is not a member of the ASEAN grouping, but the nation is ASEAN's biggest trading partner and is implementing a free trade agreement.

Vietnam, China, the Philippines, Malaysia, Brunei, and Taiwan have laid claim to all or part of the disputed territories in the South China Sea which include potentially resource-rich island chains and some of the busiest shipping lanes in the world.

China has underlined its "indisputable sovereignty" over the South China Sea, saying its claims stretch back at least to the 1930s, when official maps from Beijing contained the whole sea as Chinese territory.

Beijing’s current claims are based on a 2009 map showing a U-shaped dotted line extending from China and enclosing virtually the entire South China Sea while hugging the coastline of Vietnam, Malaysia, Brunei, and the Philippines.

Ahead of Tuesday night’s meeting, Liang also held talks with Philippines’ Defense Minister Voltaire Gazmin on the sidelines of the ADMM.

“I am hoping that this meeting will allow the Philippines and China to ease some tensions over the dispute,” Gazmin told reporters as he prepared to talk with Liang on Tuesday.

The dispute between China and the Philippines centers around claims to sovereignty over the hotly contested Scarborough Shoal, a tiny island which lies about 230 kilometers (140 miles) off the coast of the Philippines. The island is surrounded by rich fishing waters and is believed to sit atop a large cache of oil and natural gas.

A standoff between the two nations over the Scarborough Shoal originated on April 8 when Chinese merchant ships prevented a Philippines naval vessel from arresting a group of Chinese fishing boats that said they were taking shelter from rough seas near the island.

Both sides have since sent ships to the area, ratcheting up tensions on the water and leading to a diplomatic row that has stoked nationalism on both sides. Earlier this month, hundreds in Manila protested Chinese claims and Chinese travel agencies responded by canceling tours to the country.

Tea Banh also said Tuesday that the ten ASEAN ministers had agreed that their countries will comply with a code of conduct, which was drafted in a May 24 meeting, to resolve the South China Sea dispute in a peaceful manner.

That draft was based on a 2002 decision by ASEAN and China to devise a code of conduct to resolve sea disputes peacefully.

China has insisted that negotiations over disputed islands in the vast sea with its Southeast Asian neighbors be held on a bilateral basis in an apparent bid to avoid internationalizing the issue.

Tea Banh said that the final draft of the code of conduct will be adopted before the ASEAN Foreign Minister Meeting in July, also to be held in Phnom Penh.

I received my first <a href="http://goodfinance-blog.com/topics/credit-loans">credit loans when I was a teenager and that aided me very much. Nevertheless, I need the short term loan as well.

laotianes and combodians have to be strong in their militaries otherwise Thais will threat you if you are weak.