China’s Holding Back of Terrorism Evidence Seen as Baffling 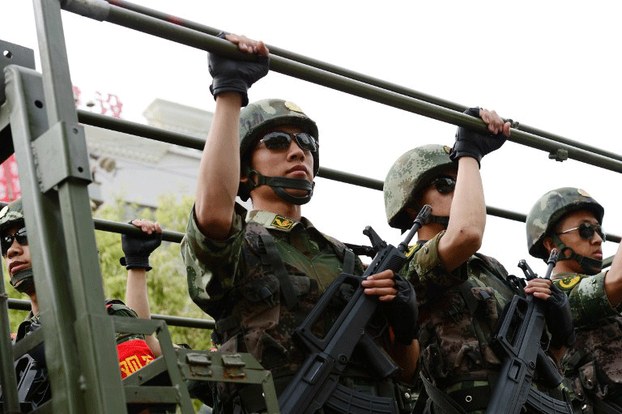 Chinese security forces participating in a military drill in Hotan in the Xinjiang region, June 6, 2014.

China says it is reeling from a serious terrorism threat following recent deadly attacks but has refused to provide evidence to back its claims, raising questions over the basis of its charges and making it difficult for foreign governments and experts to deduce the magnitude of the problem.

Some experts wonder whether the Chinese authorities have little reliable evidence to share with the international community following the four high- profile attacks since October last year that have killed nearly 80 people and wounded scores of others.

Beijing has accused overseas Islamic terror groups of being behind the ethnic minority Muslim Uyghur "extremists" and "separatists" in China's troubled Xinjiang region who have been blamed for the attacks.

But it has not provided detailed evidence of terrorist involvement in the bloody violence.

It has also prevented journalists and international observers from independently verifying official Chinese media accounts which have been the sole source of information of the attacks.

"It seems China's reluctance stems from the absence of solid evidence of external links to home-grown extremist organizations," Mohan Malik, a China expert at the Hawaii-based Asia-Pacific Center for Security Studies, told RFA.

"Primitive methods" used in the recent raids—a pipe bomb-style device manufactured with low-explosive filler was cited in one case—point to a lack of coordination and external support by small groups, he said.

The Chinese state media has blamed particularly the East Turkestan Islamic Movement (ETIM), a banned militant organization advocating independence for Xinjiang that has run sanctuaries and training facilities in the Afghanistan-Pakistan region since the mid-1990s.

But experts have shrugged off the claims, saying ETIM is obscure or largely defunct, though it was once tied to the dreaded Al-Qaeda terror network.

"There is little evidence so far that links these attacks to external sources—beyond a small number of Uyghur Islamists in Pakistan," Michael Clarke, a senior research fellow at Australia's Griffith University, told RFA.

Clarke, who has authored several books on Xinjiang and Central Asia, said China may want to depict the rising violence in Xinjiang as terrorist acts in a bid to cover up any harsh measures it takes to stem the attacks.

"In terms of international 'feedback,' Beijing is primarily concerned to portray its Uyghur problem as terrorism for the simple fact if successful— which to date it has been—it makes it very difficult for other actors to critique China's heavy-handed response in Xinjiang," he said.

Clarke said Beijing may have been withholding information on the attacks so as to not complicate ongoing investigations into the violence or in order to manage any potential for details of certain attacks to inflame interethnic tensions between the Uyghurs and majority Han Chinese in Xinjiang.

The theory that Beijing has little reliable evidence on the attacks "is perhaps unkind but has some basis in past episodes in Xinjiang where the authorities constructed a narrative of 'terrorism' around Uyghur opposition to justify a hard-line approach," he said.

Clarke also wondered whether China is concerned that any evidence cited of terrorist attacks may implicate its ally Pakistan.

"Regional authorities in Xinjiang had in 2011 for example explicitly blamed Pakistan for permitting Uyghur Islamists to use the tribal areas as bases for attacks in Xinjiang," he said. "Publicizing of Pakistan's possible links to the latest series of attacks would be very damaging to the so-called 'all weather' Sino-Pakistan alliance."

This year easily has been the most violent in Xinjiang since deadly riots between Uyghurs and Han Chinese rocked Xinjiang's capital, Urumqi, in July 2009 and left almost 200 people dead.

Uyghur exile groups charge that Bejing's repressive policies in Xinjiang, as in Tibet, have fueled the unrest, a claim Beijing strongly denies.

The latest attack in Xijiiang—on an open market in Urumqi on May 22—was the bloodiest single act of violence in the region in recent history, killing 43 people, including the four assailants.

Three earlier high-profile attacks in China also were blamed on Uyghur extremists, who had used rudimentary explosives, vehicles, or knives.

Chinese authorities said that a suicide bombing at an Urumqi train station in April killed two suspected insurgents and one bystander, and that a stabbing spree at a train station in the southwestern city of Kunming a month earlier left 33 people dead, including the four perpetrators.

Concerned over the reports of rising violence in Xinjiang, the United States has tried to prod the Chinese authorities into providing evidence of terrorism but to no avail.

"[I]t would be helpful to us if the Chinese would allow greater access to information on some of these attacks so that we could make a more informed estimate of what the circumstances were surrounding them," lamented Tina Kaidanow, the U.S. Coordinator for Counterterrorism in the State Department.

"And we've made that clear to the Chinese Government," she said in reply to a question at a recent briefing on the latest annual global terrorism report by her agency.

China frequently refers to Uyghur activists abroad—including those in the United States—as complicit in supporting "terrorist" activity, but it has not provided credible evidence to support those claims, the report said.

The Chinese state news media and some commentators slammed the report, criticizing Washington and the Western news media for being too hesitant to label the deadly attacks in China as terrorism.

In a rare move, both the White House and State Department described the May 22 attack on the Urumqi market as terrorism, using carefully crafted language.

"Based on the information reported by the Chinese media, the May 22 incident appears to have been an act of terrorism targeting random members of the public," the State Department said.

"We do not have further information about the attack," a State Department official told RFA when asked to elaborate. "We encourage China to allow foreign journalists and other outside observers to independently assess PRC [People's Republic of China] accounts of violent incidents," he said, speaking on condition of anonymity.

The United States had branded ETIM a terrorist organization in September 2002, a year after Al-Qaeda militants hijacked planes and slammed them into the World Trade Center's twin towers, the Pentagon, and a field near Shanksville, Pennsylvania, killing nearly 3,000 people.

When asked to comment on experts' suggestions that ETIM is unlikely to have the capability to carry out the attacks that recently occurred in Xinjiang, the State Department official said he had no basis for making any judgment.

"We do not have sufficient information to comment on ETIM's ability to carry out terrorist attacks in China."

Ahmed Salah Hashim, a terrorism expert at the S. Rajaratnam School of International Studies at Singapore's Nanyang Technological University, said China's reluctance to be open about terrorism attacks is aimed at preventing the issue from coming under global scrutiny.

"They do not want this problem to become center stage in the world, particularly the Muslim world with which [China] has good relations and seeks resources from," he told RFA. "Tight control of information is thus important," he said.

"Terrorism or separatist movements thrive on access to media and world knowledge. The PRC doesn't want Xinjiang to become a cause célèbre in the international arena," he said.

While wary of working with the United States on counterterrorism efforts, China is seeking cooperation with Pakistan and the Central Asian states that may have information on the activities of Uyghur migrants or militants in their territories, Ahmed said.

Beijing is adopting a cautious approach in divulging too much information on terrorism because it may invite "undue interest and or support" from Al-Qaeda-linked organizations, according to Malik.

What is unfortunate is that there may have to be more violent attacks in China to decipher Beijing's "war on terror" narrative, some experts say.

"There are many unanswered questions regarding this subject, and it will be difficult to forecast the trajectory of Uyghur militancy in China until some of them are answered," said Scott Stewart, vice-president of tactical analysis at U.S. geopolitical intelligence firm Stratfor.

"Given the limits placed on media reporting from China, especially from Xinjiang, combined with the Chinese government's efforts to obfuscate this issue and label all Uyghur separatists as terrorists, the picture will remain murky," he said in a recent bulletin to clients.

"Unfortunately, this means that we will likely have to wait until there are additional attacks to begin to look for clues that will help us answer some of these questions and help our readers and clients in China better understand what the implications of Uyghur militancy are for them."

As usual: China cheats. Terrorists? The Uighurs or the Hans? The truth is certainly that the Hans terrorize the Uighurs.
The way how China responds to the International Court of Justice, filed by the Philippines in Den Haag, proves the world how China acts with "evidences".

Why is China holding back terrorism evidence? The answer is the same way China holding evidence on Chinese dissidents. Or worst, China would twist evidence to make tramp-up charge.

There is no terrorism in China. Only desperate people crying for help by doing desperate act because they were neglected by the Communist.