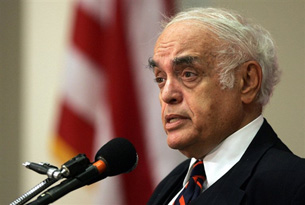 As I embarked on a trip with Novak into eastern Cambodia in April 1970, my expectations were not high.

As a correspondent for The Christian Science Monitor, I had already met a few visiting columnists and other luminaries who came on brief trips to Vietnam. They had their views fixed and stories written before they arrived, as far as I could tell.

In Vietnam, U.S. military officers briefed and escorted them around. Indeed, Novak himself acknowledged that the U.S. authorities “did their best to make life easy” for him in Vietnam.

But Novak surprised me. In Cambodia at that point, there were no U.S. officers, helicopters, or airplanes to shuttle us around. The only way to find the war was to take to the roads and do basic reporting.

Novak knew how to do that. He had once reported for a wire service in the 1950s, which was the best basic training you could get in the news business at the time.

Novak went on to embrace the nickname “Prince of Darkness.” Colleagues said it derived from his dour visage and professed pessimism.

In Phnom Penh, Novak linked up with Jim Wallace, a correspondent with U.S. News & World Report, and the two invited me to join them on a road trip into an area near the Vietnam border called the Parrot’s Beak. This was the center of the action in Cambodia at that early stage of the war.

A Cambodian spokesman in Phnom Penh was claiming glorious victories over the North Vietnamese, but as Novak and the rest of us realized, this was “pure fiction.”

In his autobiography, The Prince of Darkness, Novak described the situation: “American reporters, usually in groups of two or three, would hire a car with driver and interpreter at a daily rate of ten dollars in town and twenty-five dollars in the countryside (with a premium of one hundred dollars if shot at).”

Air-conditioned Mercedes had all been taken by other reporters by the time Wallace got to town. He was only able to procure “a timeworn four-door Chevrolet Impala ....”

“When we reached the Neak Leung ferry station on the Mekong an hour out of Phnom Penh, there was a line of Mercedes sedans carrying reporters, immobilized by what they saw ...,” Novak recalled.

“We saw an endless procession of dead bodies ... floating down the river. We thus learned of a genocidal slaughter in process. The dead were ethnic Vietnamese, not invading troops but civilian residents, some of whom had lived in Cambodia for generations and now had been slaughtered by their fellow Cambodians, ethnic Khmer, and dumped in the river ....”

“The Lon Nol government had been exhorting the populace to patriotic fervor against Communist Vietnamese troops” and had unleashed ethnic hatred against all Vietnamese. 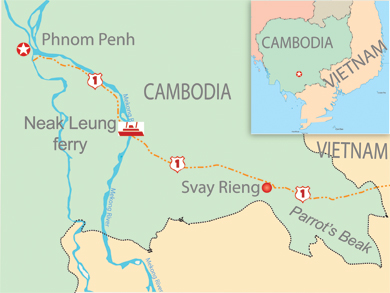 Danger on the road

In the Parrot’s Beak, at the provincial capital of Svay Rieng, we located a Cambodian army brigade whose troops appeared to be nearly encircled by the Viet Cong.

We were told to wait till the brigade’s commander finished his daily nap. After considerable delay, we found the colonel wearing a silk dressing gown and offering us cognac. He launched into a monologue laced with fantasies about easily defeating the Viet Cong.

By this time, Novak wrote in his autobiography, “Wallace, Southerland, and I were in nearly as much danger as the colonel.”

We had wasted so much time at the brigade headquarters that night was falling, with miles to go before we regained Phnom Penh.

At one point, we heard automatic weapons fire. Wallace shouted to the driver to accelerate, and we sped out of danger.

But at Neak Leung, we found the ferryboat tied up. The only person around was a boy who told us the ferryman had gone home. The boy took off running.

Our driver began to sob. We faced a night without lodging and the possibility that hostile guerrillas would find us.

“Then out of the darkness, we heard truck engines,” Novak recalled. “Guerrillas don’t travel by truck. It was a Cambodian Army company, with the ferryman in tow. It might as well  have been the U.S. Cavalry to the rescue as they carried us across the Mekong.”

The last time I saw Novak was in May 2006 at a media conference in Florida held on an estate that included an open-air zoo.

Novak and a few of us visited the zoo during a break from the conference, where Novak was the keynote speaker.

We were offered a chance to stick our hands through a wire fence and pet a cheetah. I declined to do so. Novak reached in and patted the cheetah.