On trial, he became the only defendant yet to come close to telling the truth about what happened.
By Dan Southerland, Executive Editor
2010-07-27
Tweet 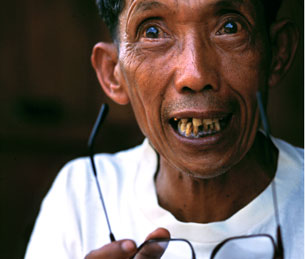 Duch confessing to mass murder after being confronted by photojournalist Nic Dunlop in Samlaut, Cambodia, in April 1999.
Photo: Nic Dunlop/Panos Pictures
Try to imagine the top student in your class. The most conscientious student you ever met, the guy who became a caring teacher.

Then try to imagine that same person turning into a mass murderer.

That’s the mind game that you play as you attempt to understand Kaing Guek Eav, widely known as Duch, the first Khmer Rouge official convicted for crimes against humanity.

On July 26, Duch was sentenced to 35 years in jail, with 16 years off for time already served, for his role in overseeing thousands of deaths as a prison chief from 1975-1979.

As a reporter in Cambodia during the war there from 1970-1975, I rarely saw the face of the Khmer Rouge.

In 1970, I once came across a small group of Khmer Rouge defectors and on another occasion I took a photo of a single Khmer Rouge prisoner, arms tied behind his back.

I heard Khmer Rouge rockets whistling overhead. I saw the damage that they caused, including the 1975 deaths of several children when a rocket smashed into a primary school in Phnom Penh.

But none of us who witnessed the war, nor most Cambodians, ever knew who the secretive Khmer Rouge leaders were until after they came to power.

Though they now know those leaders’ names, many Cambodians would probably prefer not to relive that painful period. Under Khmer Rouge rule, up to 2 million people perished from starvation, overwork, torture, and execution.

It was hoped that the much-delayed Khmer Rouge trial would bring a sense of justice to many of those who survived.

And Duch, now 67, seemed the right choice to stand trial first. Though he was not one of the highest-ranking of the five Khmer Rouge officials charged with crimes against humanity, Duch ran the most notorious torture center, a former high school known as S-21.

Once on trial, Duch became the only defendant yet to come close to telling the truth about what happened.

While the other four have denied any knowledge or responsibility for the killings that occurred throughout Cambodia, Duch has admitted that he had overseen torture and mass executions.

How Duch transformed himself from diligent student and kindly teacher into chief executioner remains baffling, however.

“Duch was a very smart student,” said Leam Sarun, 70, who befriended Duch in 1962 when Leam Sarun served as a monk in a pagoda in Phnom Penh. Leam Sarun considered Duch an idealist.

“He felt for poor people,” Leam Sarun told RFA. “He would tell others not to hurt the poor.”

But many of those who ended up in S-21 were very poor. They included both men and women who had fought for the Khmer Rouge but were then deemed to be traitors. Most seemed to have no idea why they had been imprisoned and tortured. Hundreds were children.

Thanks to two books published in recent years—The Gate by Francois Bizot and The Lost Executioner by Nic Dunlop—we can begin to understand Duch’s metamorphosis.

Bizot, a French expert on Cambodian Buddhism who was held prisoner by Duch during the war, began to see Duch himself as a prisoner “inside a large machine from which he could no longer escape.”

“And so he, like everyone from his fellow leaders to the humblest conscripts, was ruled by fear….” wrote Bizot, who was one of only a small number of foreigners able to escape from Khmer Rouge captivity.

It was Duch himself who finally decided to release Bizot after wrongly accusing him of working for the CIA.

Bizot became the only foreigner to survive imprisonment under Duch. Several others were executed.

Duch disappeared after the Khmer Rouge were driven from power in 1979, but photojournalist Nic Dunlop found Duch in early 1999. The former torture center commander was living in the provinces and working for a U.S. aid organization. He professed to have converted to Christianity.

In his meeting with Dunlop, Duch confessed to mass murder. Dunlop’s discovery led ultimately to Duch’s arrest and trial.

Dunlop’s book examines Duch’s life from childhood to respected teacher to murderous revolutionary. It ends with his admission of guilt for crimes that can only be described as atrocities.

Hey,
Thanks so much for sharing Duch's story. This really goes to show that even if someone is smart and successful they can still fall down the wrong path. I would be very interested in reading more in Dunlop's book. This article is a great use of <a href="https://businessfirstfamily.com/insightful-internet-marketing-benefits-all-involved/">internet marketing for him because I will definitely be buying the book!
Best,
Dennis

It is very interesting to have Duch or other of the khmer rough leaders for trial, but what the most important point is that what is the goal of Khmer rough that they kill their people. What i am interested in the most is that if Duch a diligent student, kindly teacher and he felt for the poor and not hurt the poor like Mr.Leam Sarun informed then what motivation made him imprison and killed the poor.
I believe that justice would not take place if the root causes do not find or unless all the cambodians say it is justice then this is justice.

it is called communism,a total authoritarian government controlled regime where every rights of its citizens are stripped away including those who serve it; or one can call it "a state slavery".