Women Under Xi Jinping 'Have Become More And More Oppressed' 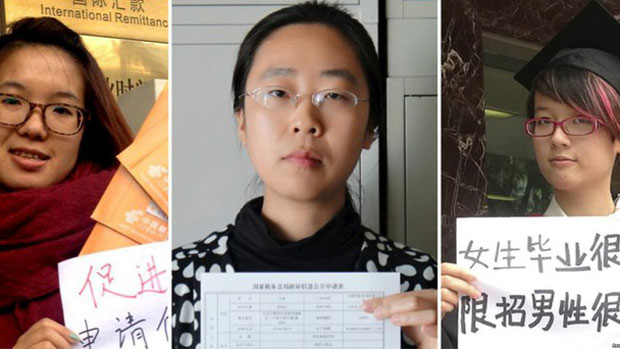 Journalist and independent scholar Leta Hong Fincher, author of the newly published "Betraying Big Brother: The Feminist Awakening in China," spoke to RFA's Mandarin Service about the outlook for women's rights activism since the 2015 detention of the five feminists—Wu Rongrong, Li Tingting, Wei Tingting, Wang Man, and Zheng Churan—as they planned a public campaign against sexual harassment on public transport:

When the Chinese government detained five feminists on the eve of International Women's day on March 8, 2015, a lot of women's rights activists had plans to celebrate International Women's Day in different cities. They were planning to hand out leaflets opposing sexual harassment on the subway and other forms of public transportation. But then police in a number of cities started detaining them, eventually focusing on the feminist five. They took them to Beijing and locked them up in a detention center, saying that they had committed breaches of so-called public order.

I actually know one of the activists personally; Li Maizi; I got to know her when I was writing my book Leftover Women. Back then, I was very worried about the five feminists, and I went to Beijing, Hangzhou, Guangzhou, and Hong Kong to interview them. I realized that the feminist movement in China is far broader than just those five feminists, and that was the premise for writing this book.

I think that one of the crucial factors in the maintenance of the Chinese Communist Party's system of authoritarian rule is its patriarchal power base, which is constructed on the subjugation and exclusion of women, and discrimination based on gender. Under the leadership of Xi Jinping, Chinese women have become more and more oppressed, with Xi Jinping calling openly on women to stay at home and be good wives and mothers. Many of these Confucian ideas that were abandoned by the early communists are now making a comeback, in order to maintain the stability of the regime.

Let me give you an example. State newspapers and broadcasters, including the China Daily and the state news agency Xinhua, have been mentioning a new concept that has appeared under Xi Jinping's adminstration, which is that of a homeland where everyone is like a big family. One Xinhua report said that Xi Jinping's emphasis on family values stems from the fact that he is a father, and, more importantly, that he is also a son who takes care of his mother. A lot of Chinese Communist Party propaganda these days focuses on the Confucian idea of women's domestic role, and on the feminine virtues women are supposed to possess. This return to traditional Chinese values ... is very important to the stability of the Communist Party regime.

Since 2016, there have been huge changes in China's family planning policies. The government has abolished the one-child policy of the past 30-something years, and brought in a two-child policy instead, targeting young, highly educated women. Government propaganda is now encouraging women to marry before the age of 30 and to have children sooner, and to have two, not just one.

The government has realized that women's fertility can be used in the service of the regime, saying that it's best to get pregnant before the age of 30, and stepping up propaganda among female university students to encourage them to become mothers, even while they are still in college.

The slogan used by propaganda departments for female university students is "live together in your first year, get pregnant in your second year, and have your baby in the third." They use a photo of a young woman happily pushing a baby buggy and pregnant with her second child, as she collects her degree.

A lot of young Chinese women are unhappy, though. I carried out a lot of interviews for my first book, Leftover Women. These are highly educated, highly intelligent young women, but they don't like their spouses. Some of them say all of their savings and property have been transferred to their husband's sole name after marriage.

A lot of women's rights activists have used performance art to protest sexual harassment, domestic violence, and discrimination against women, as well as inequalities in the way colleges and employers recruit men and women. The internet has played a huge role in that process in recent years.

China didn't have a law banning domestic violence until 2016 ... but two years on, it has never been properly implemented. Personally, I think that when the Chinese government passed that law, it was really just in order to make an impression with the international community ... I don't think they care much at all about tackling violence against women.