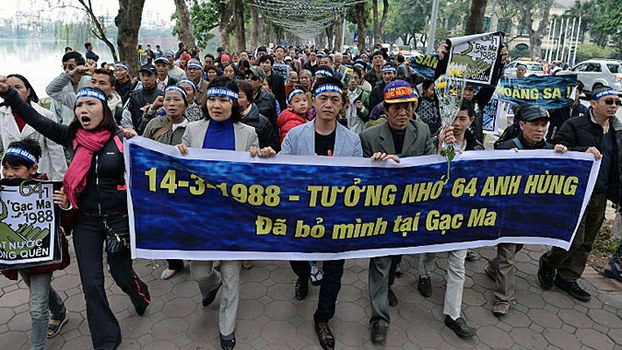 Vietnamese demonstrators chant anti-China slogans during a rally in Hanoi marking the anniversary of a 1988 battle between Vietnam and China in the Spratly Islands, March 14, 2016.

A group of 100 Vietnamese intellectuals and activists penned a letter to U.S. President Donald Trump urging him to help thwart China’s gradual takeover of the South China Sea, where Hanoi and Beijing are embroiled in maritime territorial disputes.

In an appeal launched as Trump prepares to meet next week in Hanoi, Vietnam, with North Korean leader Kim Jong Un, the group praised recent tough speeches about China by Trump administration officials and called for U.S. support in the dispute over islands and reefs.

“China as an aggressive and unfettered ambitious nation has blatantly expanded the conquest of Vietnam’s waters and islands on the South China Sea, threatening the freedom of navigation of all countries in the region, challenging the authority of the United States in the Asia-Pacific region,” said the letter.

“That wrong-headed ambition must be crushed today because it is unrighteous, because it is an ambition to deprive the sacred freedom of the Vietnamese people and the peoples of Asia-Pacific,” the authors added.

“We believe that in today’s world, the interests of Vietnam and the United States are similar; a strong and independent Vietnam would ensure the greater security and peace for the region. Therefore, in the struggle to protect and reform the country, we believe in the support of the people and governments of the free world, especially the United States of America,” said the letter.

There was no immediate response from the White House.

Trump and North Korean leader Kim Jong Un plan to meet on Feb. 27-28 in Hanoi, where Kim is expected to demand relief from economic sanctions and the U.S. is expected to press Pyongyang to follow through on previous pledges to denuclearize.

China has aggressively asserted its claims to the Spratlys and the rest of the South China Sea—which Vietnam refers to as the East Sea—based on its so-called “nine-dash” demarcation line that encompasses some 90 percent of the waters, including territory claimed by Vietnam, the Philippines, Brunei, Malaysia, Indonesia, Thailand, and Singapore.

Beijing has been fortifying the islands it claims in the vital waterway with weaponry, runways and deep water berths. China has also created artificial islands in the South China Sea by dredging massive amounts of sand and Chinese officials have promoted tourism to the islands.

In March 1988, a confrontation at Johnson South Reef, Collin Reef, and Lansdowne Reef in the contested Spratly Island chain resulted in heavily outgunned Vietnamese vessels being sunk, with 64 Vietnamese soldiers dead and 11 wounded.

China seized the Paracel Islands, which it still holds, in a skirmish with Vietnamese forces in 1974 that left 75 Vietnamese soldiers dead.

In 2016, an international arbitration court in the Hague, the Netherlands, ruled that China has no right to resources within its so-called nine-dash demarcation line, and that it is not entitled to an exclusive economic zone surrounding reefs and atolls in the Spratly Islands because these features did not qualify as islands generating such zones.

Vietnam continues to assert its sovereignty over the Spratly Islands, although China has dismissed the ruling and continues its military buildup in the South China Sea.

Vietnamese police routinely break up anti-China protests marking the anniversaries of the takeovers of the Spratly and Paracel islands and detain demonstrators. Security for the Trump-Kim summit is expected to be tight.

YOU CAN NOT GET OUT WITH CHINA while you talk like Chinese , you dress like Chinese, you eat like Chinese. From your head to your toe are the same like Chinese. Just look at the way Chinese treat to Tibetan, Uighur people ...you do the same thing to Dega people in Central Highlands. You kill us, you take our lands, you kill our language, you destroy our culture,you pollute our environment, you exterminate our elites, you poison our children with alcoholic, you harmful our food......
THE ONLY WAY YOU CAN GET AWAY WITH CHINA is stop your genocidal policy on Dega people, recognize your barbaric crimes , return our ancestral land, preparation all lives you have committed.....AND FINALLY LET DEGA PEOPLE ALONE.

Sure, these 100 "Vietnamese intellectuals" are smartly, counting on another American president to rescue Vietnam's territories after the betrayal of Richard Nixon - permitting China to take the Paracel islands from then-ally south Vietnam in 1974, Jim Carter's approval of Chinese cross-border massacre in 1979 and 1988 Ronald Reagan's non-intervention vote at UN for another Chinese invasion of the Spratly....

Mary why do you have to sound this hopeless? I believe Vietnam will have to take side in the coming months or years. Even though it's not a very comfortable situation. On the one hand China wants to eat you up bit by bit and on the other you will have to swallow your pride and look for new alliance. Good luck.

Mary Fangs you are out of line and it isn't your fault because the Communist Party did brain washed you terribly.
Nixon didn't do that! He got China to stop the communism expansion at VN. Hence, the deal was made 1/China stops communism expansion after VN, and 2/USA got to 'safe face' and leave VN w/ 'honor'.
Plz, you live in a free world now, get your head out of the cesspool and learn the truth.

Hey hey. Now you're turning to Uncle Sam again huh.Vietnam, you're smart and you have lots of smart people including Mary Pham. Stop being communist for once this time. Free your force from oppression, free the strong intellect of your people. Let them choose the people they want to be governed by. Erase the commnunist party from your history book and make a giant step toward a free society once and for all. This is the way by which Vietnam will come out as a great nation in Asia and in the world. Do it before it's too late.