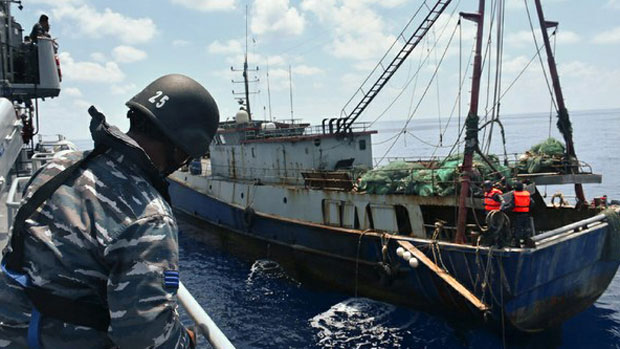 Indonesia is pushing ahead with plans to develop a fishing zone on the edge of the South China Sea, a senior official said Tuesday, as the country seeks to assert sovereignty amid claims of overlapping rights by China.

The government plans to construct the Integrated Marine and Fisheries Center, which would include a cold storage facility that has been in development for two years on the Natuna Islands, Maritime Affairs Coordinating Minister Luhut Pandjaitan said. The island-chain lies in the far southern reaches of the South China Sea.

“We are studying details of how the port and other facilities will be built,” Luhut told reporters on Tuesday.

“We have the right to be there,” Luhut said when asked if the plans were part of Indonesia’s effort to maintain sovereignty over waters off the Natunas.

In 2016, navy patrols confronted Chinese fishing boats in waters off the islands at least three times, as the government increased its crackdown on illegal fishing. Indonesia accused the Chinese of fishing within Indonesia’s exclusive economic zone, or EEZ. China responded by calling the waters traditional fishing grounds and said there were overlapping “maritime rights and interests” in the area.

Tensions between China and its neighbors have risen as the superpower has sought to assert its control of the South China Sea in the face of competing territorial claims from countries in the region. China claims most of the sea as its own, while Vietnam, Taiwan, the Philippines, Malaysia and Brunei have overlapping claims to territories in the sea.

Last week, Luhut told reporters that the government would deploy a tanker in the Natuna Sea bordering the South China Sea to guarantee fuel for fishermen.

“We will also deploy TNI (military) patrol ships, so no country will claim that it’s their traditional fishing ground,” he said at the time.

In a related development, Marine and Fisheries Minister Susi Pudjiastuti said that a navy patrol had seized four Vietnamese-flagged fishing boats over the weekend for allegedly operating illegally in Natuna waters.

“The Indonesian government strongly condemns the actions of Vietnam’s Fisheries Resources Surveillance vessels for attempting to obstruct the process against the four Vietnamese fishing boats,” she said.

“The navy has been at forefront of our efforts to uphold sovereignty at sea,” Susi said. “The Indonesian government does not tolerate illegal fishing in our territory.”

Aaron Connelly, a research fellow at the International Institute for Strategic Studies (IISS), said plans for a fishing center reinforced President Joko “Jokowi” Widodo’s stance on the Natunas and maritime sovereignty in general but its South China Sea policy was unchanged.

“What Indonesia won’t do is take on the broader South China Sea issue,” he said, citing fear of losing Chinese investment and of stoking regional tensions.

Evan Laksmana, a senior researcher with the Jakarta-based Center for Strategic and International Studies (CSIS), said Indonesia’s stance on the South China Sea dispute had been half-hearted.

“Sometimes explicitly and publicly standing up for our interests is as important, if not more important than silently developing ambiguous responses,” he told BenarNews.

“After all, while the various Natuna economic and security development plans clearly have regional implications, they haven’t been driven by geopolitical development alone,” he said.

In December, the Indonesian military inaugurated an integrated unit in the Natunas. Hadi Thajanto, air chief marshal of the Indonesian Air Force, said the unit would be tasked with warding off threats such as illegal fishing.

The unit, comprising a few hundred personnel including members of army engineering corps, will be equipped with a surface-to-air missile defense system, the military said. Other facilities include a port, a hangar to support military aircraft and a hospital.

In the future, the unit will become part the Regional Defense Joint Command and will include army, air force and navy personnel, the military said.

CORRECTION: An earlier version incorrectly described Aaron Connelly as Southeast Asia director at the Lowy Institute. He formerly held that position there.

The Chinese are hungry of everything on earth. Indonesians don't ever let them come near your territories.Tensions have been going on for some time now, and the picture is clear that the Chinese want to conquer the world.