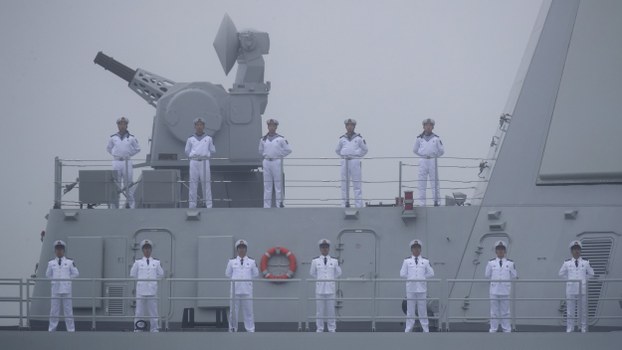 Sailors stand on the deck of a missile destroyer of the Chinese People's Liberation Army (PLA) Navy as it participates in a naval parade in the sea near Qingdao, in eastern China's Shandong province, April 23, 2019.

Vietnam should sue China in an international court of law over recent violations of Vietnam’s exclusive economic zone (EEZ) in the South China Sea, a group of Vietnamese experts have concluded at a conference in Hanoi.

In July, a Chinese survey ship named the Haiyang Dizhi 8 entered Vietnam’s EEZ to conduct seismic surveys off of the Spratly Islands’ westernmost reef, known as Vanguard Bank, triggering a tense standoff between military and coast guard vessels from Vietnam and China, as well as rare protests by Vietnamese citizens in front of the Chinese embassy in Hanoi.

It moved out of Vietnam’s EEZ on Aug. 7 and toward Fiery Cross Reef, a militarized reef occupied by China farther out in the South China Sea, but later returned under escort, prompting new demands from Vietnam that it leave.

The violation, and several other recent incursions by Chinese vessels, have led to tense relations between Hanoi and Beijing in recent months, with each side asserting sovereignty over the waters, including the Vanguard Bank.

China claims nearly all of the South China Sea, called the East Sea by Vietnam. The Philippines, Taiwan, Brunei, Malaysia, and Vietnam also have overlapping territorial claims to the sea, which is vital to international shipping and trade.

And while Hanoi has lodged protests with Beijing over the incidents, some believe that Vietnam’s one-party Communist government has failed to take a strong enough stance on the issue because it is wary of economic repercussions from China as well as the potential for further social unrest.

On Sunday, Vietnam’s Institute for Research on Policy, Law and Development (PLD) held a forum in Hanoi on “The Vanguard Bank and International Law,” which drew former officials, economists, and academics, including maritime expert Hoang Viet, who gave a presentation about why Vietnam should initiate a lawsuit against China in an international court.

Speaking to RFA’s Vietnamese Service on Monday, Viet said that Vietnam needs to sue China “because it shows a resolute attitude towards protecting international conventions” such as the 1982 United Nations Convention on the Law of the Sea (UNCLOS) and would allow the international community to “identify who is right and who is wrong in this matter.”

“Most of the attendees agreed that Vietnam needs to change its foreign policy, including coming up with a proposal for further developing relations with the U.S., to rid itself of Chinese influence,” he said.

When asked about recent statements about the Vanguard Bank by Vietnam’s Ministry of Foreign Affairs that failed to mention the possibility of a lawsuit against China, Viet would only say that the Vietnamese diplomats “have had difficulties.”

“Vietnam has on many occasions voiced its concerns over the recent complicated developments in the South China Sea, including serious incidents that infringe upon Vietnam’s sovereign rights and jurisdiction in our maritime zones as defined by UNCLOS,” Minh said at the time.

“The relevant states should exercise self-restraint and refrain from conducting unilateral acts which may complicate or escalate tensions at sea, and settle disputes by peaceful means in accordance with international law, including the UNCLOS,” he said.

Activists in Vietnam have called for stronger action against China, and amid the threat of new protests, Vietnamese authorities are clamping down on any unofficial media groups that report on disputes in the South China Sea.

In the afternoon on Sunday, police detained three reporters from the independent Chan Hun TV (CHTV) news channel after they reported on the Vanguard Bank forum earlier that day, interrogating them for several hours and confiscating their equipment, Le Dung, one of those held, told RFA after being released.

“More than a dozen plainclothes security traveling in SUVs came to arrest us, bringing us to the police headquarters at No. 3 Nguyen Gia Thieu,” he said.

“They confiscated all of our phones, cameras, recording gear, and documents.”

Dung said he and his fellow reporters were arrested while eating lunch after attending the forum and were questioned for hours by police about what was discussed at the forum and who was in attendance, before being released and told to return the following morning for additional interrogation.

“They were afraid of an independent television news channel covering the forum, because there were many academics in attendance and it is a very sensitive topic,” he said, adding that more than a dozen security agents were present at the event, monitoring the proceedings.

He noted that the forum was originally scheduled to be held on Sept. 22, but was postponed until after Oct. 5 “to allow more time for preparation.” China’s lavish National Day celebrations marking the 70th anniversary of Communist rule were held on Oct. 1.

A blogger who was present at the forum, and who declined to be named, told RFA that while few groups have dared to publicly criticize the government over the South China Sea issue, many of the attendees on Sunday expressed frustration over the Ministry of Foreign Affairs’ “slow response” to the recent Chinese incursions.

“This was rather strange, particularly since they knew that there were more than a dozen security staff and their leaders mixed in with the ranks of delegates at the forum,” the blogger said.

“It was also a surprise that they were calling on both the party and state leadership to release prisoners of conscience whose only ‘crime’—which even the indictments dared not state—were to speak out against expansionism and in defense of national sovereignty.”

According to the blogger, Ambassador Nguyen Trung, who once served as an assistant to former Prime Minister Vo Van Kiet, called for Vietnam to sue China at The Hague-based Permanent Court of Arbitration (PCA) for its “large-scale, ongoing, armed invasion of the Vanguard Bank within Vietnam’s EEZ.

Trung also requested that Vietnam lobby the United Nations General Assembly to issue a resolution on the issue and urge the U.N. to call on nations to refrain from using force in resolving disputes in the South China Sea.

The blogger said that Trung presented petitions which demanded that the government regularly inform the public on developments in the South China Sea, implement political reforms to “realize the democratic freedoms of the people,” and release detained and imprisoned dissidents.

In 2016, the Philippines prevailed over China in a case at the PCA, which rejected nearly all of Beijing’s claims. China refused to recognize the court’s jurisdiction and the new government that took office in Manila moved to appease Beijing by courting more investments from Asia’s biggest economy.