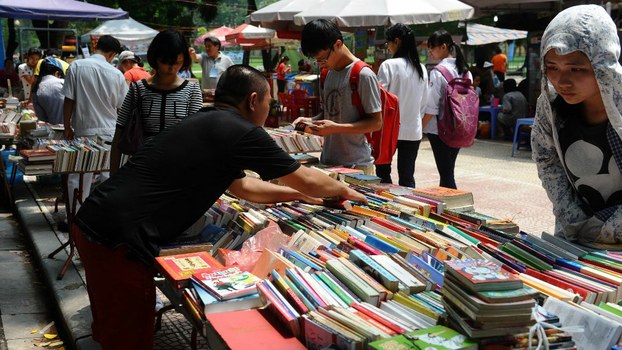 Visitors look at a stand selling used books during a four-day book fair at a public park in downtown Hanoi, Sept. 11, 2015.

A Vietnamese man arrested and beaten by police for delivering books from a publishing house targeted by authorities for putting out proscribed political books is recovering and his daughter has been released, a writer from the group told RFA on Monday.

Phung Thuy, also known as Thuy Tuat, was arrested in Ho Chi Minh City on May 8 while he was delivering books for Liberal Publishing House. His case was the focus of an appeal by Amnesty International May 14 to Vietnamese Prime Minister Nguyen Xuan Phuc.

“While in custody, Thuy Tuat was interrogated and brutally tortured, including punching in the face, chest, ribs and stomach by police from 9am to 3am the following day. Upon release, despite having serious injuries, Thuy Tuat went directly into hiding fearing that police might re-arrest him,” Amnesty said in a letter to the prime minster.

Journalist Pham Doan Trang, author of many books published by the Liberal Publishing House, told RFA that Thuy Tuat “was beaten on May 11, and three days later, his heath became worse -- and then got better and better.”

“Police have also released his daughter but they have still kept her motorbike, cellphone and stuff and surely, his daughter will be watched closely,” she said.

Amnesty said Thuy Tuat's was not an isolated case.

“Since early October 2019, police have harassed, and intimidated dozens of people connected to the Liberal Publishing House–-in what appears to be a targeted campaign,” the watchdog group said. The campaign has caught people in the major cities of  Hanoi, Ho Chi Minh City and Hue, and the provinces of Binh Duong, Quang Binh, Quang Tri and Phu Yen, it said.

“After questioning, most were pressured to sign statements promising that they would not buy books from the Liberal Publishing House again,” the appeal said.

Amnesty cited cases in Ho Chi Minh City in October and Phu Yen province in November in which men had to go into hiding after police questioned them over their ties to the publishing house.

In the Ho Chi Minh City case, “police detained him for more than 12 hours, during which time he was repeatedly beaten until his nose bled. Fearful of re-arrest, the man went into hiding as soon as he was released.”

The Liberal Publishing House books will have to find new ways to get books to readers, said Pham.

“They can’t give up because readers’ demand is still increasing,” she told RFA.

Pham was one of three female journalists awarded the 2019 Press Freedom Prize by Paris-based media watchdog Reporters Without Borders (RSF).

She was given RSF’s Prize for Impact in absentia for her work which “has led to concrete improvements in journalistic freedom, independence and pluralism, or to an increase in awareness of these matters.”