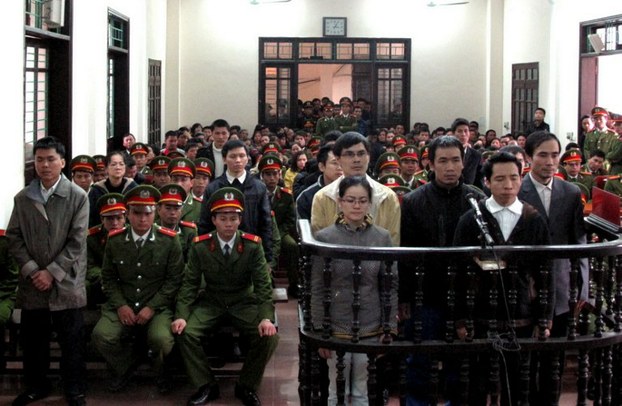 Activists convicted of plotting to 'overthrow' the government listen to their verdicts at a court in Vinh, Nghe An province on Jan. 9, 2013.

Two Catholic youth activists released from prison this week after serving four years on charges of attempting to overthrow Vietnam’s communist government said Thursday they refused to accept their convictions and vowed to continue their activism.

They were convicted of trying to “overthrow the government' under Article 79 of the Vietnam Penal Code and for their alleged affiliation with banned opposition party Viet Tan.

Tran Minh Nhat told RFA’s Vietnamese that since their arrest they were under constant pressure to sign a confession to get a shorter sentence, but refused to do so.

“I am not guilty and nobody can force me to sign a confession,” Tran Minh Nhat told RFA after he arrived home from Gia Trung Camp on Thursday.

Tran said he was asked to sign a “commitment not to re-offend, but I tore it up.”

Because he believed he was innocent “that document does not have value to me,” he added.

Thai Van Dung, who released on August 19, relayed a similar experience to RFA.

“They gave us the confession saying they can reduce my sentence to 3 months, 6 months if I agree to sign. But I noted in there that I refused to admit the charge,” he said.

As political prisoners, Tran and Thai always had to fight for their limited rights and they also had to conduct hunger strikes to get their way, they said.

“In many detention camps that I have been in, there is some kind of mechanism that especially discriminates against some prisoners,” said Tran.

“The authorities do not respect or uphold the rules. We asked for nothing much -- only that humans should be respected and human rights be guaranteed. But, they ignored our needs,” he said, describing what led to the decision to go on hunger strikes.

“And of course, after a hunger strike, some things improved, but it was just a formality,” Tran said.

“What I have been through is a priceless experience,” Tran said.

“In prison, I could see we will never have civilization or progress in a society if that society is not based on the equality, justice and love between people,” he said.

Thai told RFA he will continue working with civil society organizations, fighting for people’s rights. He also said he knows he could be arrested again, and is prepared for that.

Vietnam's constitution guarantees freedom of belief and religion, but religious activity is closely monitored and remains under state control.

With six million members, Catholicism is the country’s second-largest religion after Buddhism, but tensions between the community and the Hanoi government have led to unrest over church property and other issues.

This is what the kangaroo court looks like. I see.