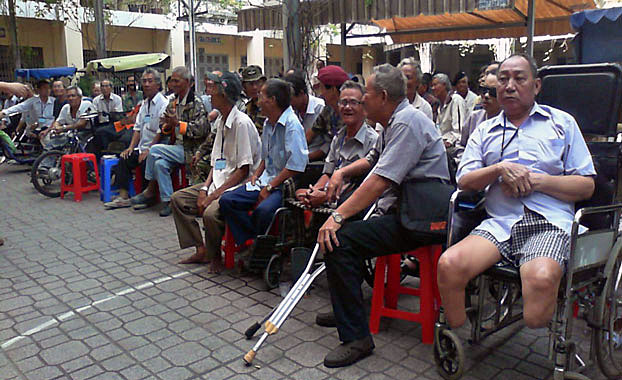 Police and thugs broke up an event organized by the Catholic Church for disabled South Vietnamese military war veterans in the southern province of Tien Giang this week, a priest in charge of the the program told RFA’s Vietnamese Service Tuesday.

Rev. Le Ngoc Thanh of Sau Bong Redemptorist Church in the city of Can Tho in Vietnam's Mekong Delta region said that police officers and thugs mobilized to stop the former soldiers from accepting donations.

The event on Monday was held by volunteers in cooperation with Rev. Ho Dac Tam of the Redemptorist Church in the Tien Giang town of Can Gio, said Thanh, who runs a Vietnamese injured veterans program.

“We distributed donations to injured soldiers from 13 provinces,” he said. “A few weeks ago we also had events like this in Kien Giang, Bac Lieu, and Ca Mau [provinces], and everything went well.”

“But yesterday the situation was tense,” he said. “Veterans gathered in Cai Lay [district] to wait to receive their gifts [for the Vietnamese New Year, known as Tet]. The first 10 veterans got their gifts without any problem, but after that, the police interfered and stopped the program.”

Vietnam’s communist government and officially atheist state does not endorse such events, even though they play a crucial social services role by helping elderly and disabled veterans who would not otherwise receive assistance from the government.

Church organizers and volunteers then moved the event to the city of My Tho in Tien Giang province, but traffic police, a rapid response police squad, other security forces, and local security personnel disrupted the event, Thanh said.

“The people who interfered with our event were uniformed policemen, traffic policemen, security people wearing masks, and thugs,” the priest said.

“There were three to four people stationed every meter from the church,” he said. “They did not let veterans sit outside the church.”

RFA could not reach Tien Giang police for comment.

‘We got our gifts’

One veteran who participated in the program but did not want to give his name for safety reasons told RFA that he fears the Vietnamese government, which persecutes South Vietnamese military war veterans and the Catholic Church.

“People at the church told me to come there at 9:30 a.m., but they did not let us inside when we arrived,” he said. “We walked around until we met some of the church’s people outside. They told us to wait for our gifts. We got our gifts.”

The veteran said he was a marine injured in the Battle of Quang Tri, the northernmost provincial capital of the U.S.-backed former Republic of South Vietnam, during the 1968 Tet Offensive during the Vietnam War.

“My right hand was injured, and now I can’t do anything,” he said. “Life is tough.”

“I was very happy to hear that we would receive some gifts, but I’m scared,” he added. “I am afraid of the government because I was associated with the South Vietnam government.

The gift-giving event for disabled veterans of the South Vietnam military was initiated by the Saigon Redemptorist Church in 2013. It had been held annually until this May when Le Ngoc Thanh, who oversaw the program, was transferred.

On Sept. 19, the Redemptorist Church in Can Gio announced that it would resume the program.

After the fall of Saigon to Communist North Vietnam in 1975, more than a quarter million South Vietnamese soldiers were sent to “re-education” camps where they suffered torture and malnutrition, historians record.

When will the Vietnamese president replace Jesus or Saint Mary in church ? Soon I guess. They've done that in China.