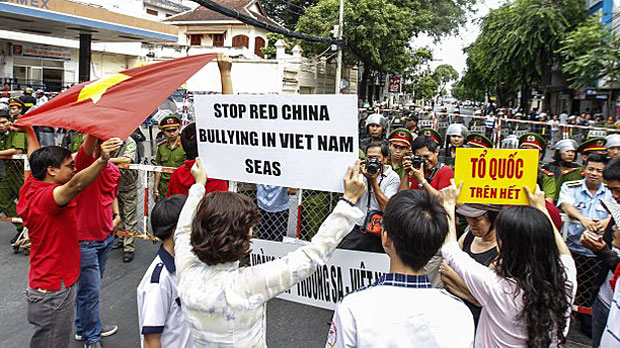 The Haiyang Dizhi 8, a ship operated by the China Geological Survey, had earlier conducted a 12-day survey of waters near the disputed Spratley Islands, with Chinese Coast Guard ships following in support.

At one point, China’s survey intruded into an offshore oil block in Vietnam’s exclusive economic zone (EEZ) off of the Spratlys’ westernmost reef, known as Vanguard Bank, and vessels from the two countries have since been involved in a weeks-long standoff near the area.

Citing Vietnamese state media, Greg Poling of the Washington, D.C.-based Maritime Transparency Initiative noted in a tweet Aug. 8 that the Haiyang Dizhi 8 had now moved out of Vietnam’s EEZ and toward Fiery Cross Reef, a militarized reef occupied by China farther out in the South China Sea.

“Is the Haiyang Dizhi packing up and leaving, or just taking a break to resupply at Fiery Cross Reef?” Poling asked, adding, “Too soon to tell.”

On Aug. 6, authorities in Hanoi shut down a rare protest outside China’s embassy by 10 activists, forcing them to disperse within 20 minutes of them holding up signs and shouting slogans in protest of China’s actions in the South China Sea.

The group peacefully complied with the police order and no one was arrested, one activist told RFA’s Vietnamese Service in a report on Tuesday.

They'll come back and stronger to run over you Vietnam.