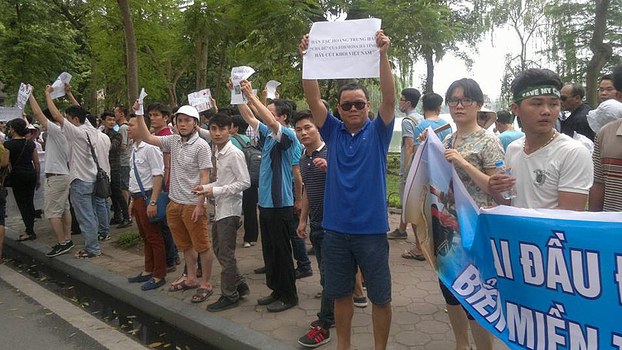 A jailed Vietnamese blogger currently awaiting trial for “abusing democratic freedoms” was transferred from prison to a mental hospital, his mother said on Thursday.

Le Anh Hung, a member of the online Brotherhood of Democracy advocacy group, was arrested in July 2018 for violating article 331 of Vietnam’s criminal code. If convicted he could serve up to seven years.

While in prison, Le had notably refused to wear prison uniforms or allow himself to be handcuffed on the rationale that prior to sentencing he should not be treated like a prisoner.

His mother, Tran Thi Niem, told RFA’s Vietnamese Service in a phone interview Thursday that her son was taken to Central Mental Hospital 1 in Hanoi.

“This morning, his brother, a friend and I went to see him [at the mental hospital,] but they would not let us,” she said.

“They told us that they have not they have not [completed initial] checks on him, so they couldn’t allow us to see him. I only left some money for him,” she said.

RFA contacted the hospital for comment, but was not able to confirm Le was interned there.

“I’m not in charge of treatment. Please bring a letter from your organization here to verify if Le Anh Hung has been admitted here or not,” he said.

Nguyen Van Mieng, the lawyer representing Le, said he hasn’t received any notice about his institutionalization.

“I’ve met him twice [in prison]. He told me to meet him after the procuracy made their report on him because police reports about him were unclear,” said Nguyen.

According to the Vietnamese Political Prisoner Database website, Le Anh Hung had previously been detained in a mental facility in 2013.

Nhân Dân (the official communist party newspaper) reported he was also detained in 2009 on slander charges in Quang Tri province, but was released when authorities concluded there was not enough evidence.

Le, a longtime critic of the Vietnamese government, has worked for many media outlets including Voice of America, a U.S.-funded broadcaster.

Amnesty international called for his release immediately after his arrest in July, saying “Vietnam’s government cannot keep using baseless charges and the threat of prison as a means of gagging its critics."

The U.S. has long criticized Vietnam for its human rights record, marked by the suppression of basic freedoms, media censorship, and repression of workers’ rights as well as its worsening record of arresting and imprisoning dissidents, bloggers and religious leaders.

According to New York-based Human Rights Watch, approximately 150 to 200 activists and bloggers are serving prison time in Vietnam simply for exercising their basic rights.

It's time to bring back the Yellow Flag with 3 Red Stripes and plant it in the heart of the land again so that people from the the highlands, from the vast green fields in the west, from every city in the central region can see its brilliant.
Let's our arms joined to hold it up in gale wind, torrential rain, and oppression while we sing out the word of Freedom.
Freedom is above all!

Watch out Vietnamese people. When you're moved from prison to mental institution in Vietnam, usually you're mentally in good health upon arrival. After a few days you'll become crazy as by magic. Communist techniques taught in communist countries.So what do you think Mary Pham?

As humble dentist, I often don't venture into other healthcare fields but since my anonymous fan insists, here's my observation: Kudos to Vietnam's prison authorities for transferring this guy to a mental institution and to stop his family from seeing him. My reasons are: 1) He was in a mental hospital in 2013, that's too soon for recovery. 2) Released from prison, he went to work for US-funded VOA and RFA, this indicates even more serious mental lapses or relapses. 3) Back in prison, he refuses wearing uniform and being cuffed, very anti-social behavior for a detained person. 4) Anti-social mental patient does harm to himself and others, keep him away from his family is a win-win medical solution. 5) The US-based Human Rights Watch always avoids domestic injustice, largest prison population in the world, police killing on streets, deaths behind bars... but readily finds prisoners of conscience everywhere else (200 Vietnamese) - making this automatically, a mental case!