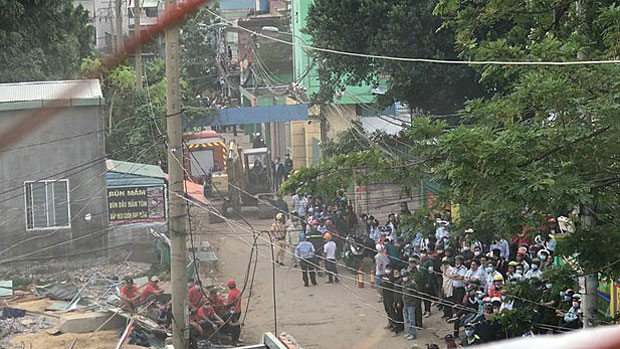 Authorities in southern Vietnam’s Ho Chi Minh City have demolished at least 112 houses in a parcel of land claimed by the Catholic Church, forcing many residents from their homes, Vietnamese sources say.

The two-day operation on Jan. 4 and Jan. 8 in the Tan Binh district’s Loc Hung Vegetable Garden settlement took residents, including political dissidents and veterans of the former Army of South Vietnam, completely by surprise, some of those evicted told RFA’s Vietnamese Service on Thursday.

“They sent about a thousand people here, including uniformed forces and people wearing masks,” one source told RFA.

“They used bulldozers and earth movers, around eight in total, to demolish our houses,” the source said, speaking on condition of anonymity.

“I had never seen anything like that before, and I prayed that things would be OK, but they tore my house down anyway,” he said.

Also speaking to RFA, another former resident said that authorities had not warned settlement residents they would be forced from their homes.

“We didn’t hear anything about this from government officials. We had only heard rumors,” the source said, also speaking on condition his name not be used.

“They should have told us this was going to happen so that we could move our possessions. Now we have to live on the street. Where can we go?”

Many of those displaced from their homes were disabled veterans of the former South Vietnamese army, with some confined to wheelchairs, another source said, adding, “Crying, they asked me if their houses were going to be destroyed. I could only tell them I didn’t know.”

State media on Thursday said no forced evictions had taken place, and that only illegally built houses had been taken down, with those turned out of their homes offered temporary dwellings by the district along with VND $3 million (U.S. $120) a month for three months while they look for new homes.

“That land was allotted to people who had escaped the [Communist] regime in the North in 1954,” he said.

Registered for agricultural use in 1991, 1995, and 2005, the land had been used by residents for growing vegetables ever since, sources said.

Speaking to RFA, Vietnamese lawyer Pham Cong Ut said that state authorities had been wrong to take away residents’ right to use the land, adding, “They issued an eviction order but should have issued an order for land appropriation first.”

Authorities in Vietnam have long repressed the Catholic Church in the one-party communist state and subjected it to forced evictions, land grabs, and attacks on priests and their followers, sources say.

While all land in Vietnam is ultimately held by the state, land confiscations have become a flashpoint as residents accuse the government of pushing small landowners aside in favor of lucrative real estate projects, and of paying too little in compensation to those whose land is taken.

Reported by RFA’s Vietnamese Service. Translated by An Nguyen and Viet Ha. Written in English by Richard Finney.

The government in all levels ignore the fact that this area belongs to the Catholics with complete proving documents. The robberies do not care who is/are the owners, they just use their power to torture residents.

Bad communists are against the people !

There are no such things as good communists. All communists are bad and evil.