Further attacks on security personnel are reported near Kashgar as police in the northwestern region of Xinjiang detain 15 suspects following explosions in the far west of the region last week.
2008-08-12
Tweet 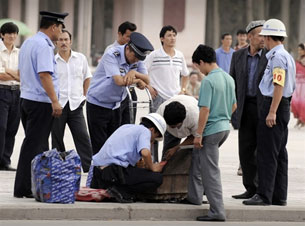 Ethnic Uyghurs' bags are searched in the main square in Xinjiang's famed Silk Road city of Kashgar on August 8, 2008.
AFP

BEIJING—Chinese police have detained 15 ethnic minority Uyghurs, including three women, in connection with a series of deadly bombings in the troubled northwestern region of Xinjiang last week. Meanwhile, assailants killed three security guards in the town of Yamanya near Kashgar in the third attack in little more than a week.

Assailants jumped off a vehicle passing a road checkpoint in Yamanya in the early hours of Tuesday, stabbing security guards with knives, official media reported.

“As a result, three security personnel were killed and another was injured; the assailants fled after mounting the attack,” the Chinese-language Ta Kung Pao newspaper said.

Two “militia men” and a cadre from the township administration office were killed, and a deputy secretary of a local village Communist Party branch was seriously injured, the paper said.

Officials contacted by RFA’s Uyghur service declined to comment on the attack, which was also reported in brief by the official Xinhua news agency.

The attack occurred just 30 kms (18 miles) from the site of an Aug. 4 attack on frontier guards near Kashgar.

In Kucha, scene of Sunday’s bombings in which 12 people died, residents said the authorities had placed the city under curfew, as officials searched nearby villages for suspects.

Twelve people were killed in the explosions, which occurred 480 kms (300 miles) west of the region’s capital, Urumqi, according to local officials and state-run media.

“One security guard was killed and another casualty was an innocent civilian,” Aksu prefectural commissioner Mutellip Qasim told a news conference.

The group said in a news story published on its Web site that the attackers, seven men and four women, were “martyred.”

Uyghurs twice enjoyed short-lived independence after declaring the state of East Turkestan during the 1930s and 40s, and many oppose Beijing’s rule in the region.

According to ETIC, “strict martial law” has been imposed on the area around Kucha, with large numbers of troops and armed police brought in from military camps in Bugur.

Security forces from nearby army production corps, or bingtuan, had also been brought in, the group said.

While the attacks did target symbols of Han Chinese power in the city, they appear to have been timed to minimize civilian casualties.

One shop owner, whose business is located near Kucha’s main police station, said the incidents began at midnight and continued through 7 a.m. Sunday.

“At the time of the attack, there were still a lot of people in the market,” he said. “If they had targeted civilians, they could have killed a lot of people, but they targeted only police.”

Another Kucha resident said that since the start of the Olympic Games on Aug. 8, most businesses have been closed and only police appeared to be working regularly.

The resident, surnamed Li, said Kucha was now under curfew. “Police told us to stay inside and lock the door for our own safety. They said it was a terrorist attack,” Li said. “It’s not the end of it—there will be more attacks in Xinjiang.”

Another Kucha resident, who declined to be identified, said officials were conducting searches in nearby villages to track down additional suspects.

Xinhua said the explosives used were rudimentary pipe bombs and the attacks were loosely planned, with a taxi used to transport the attackers as they threw explosives from its windows.