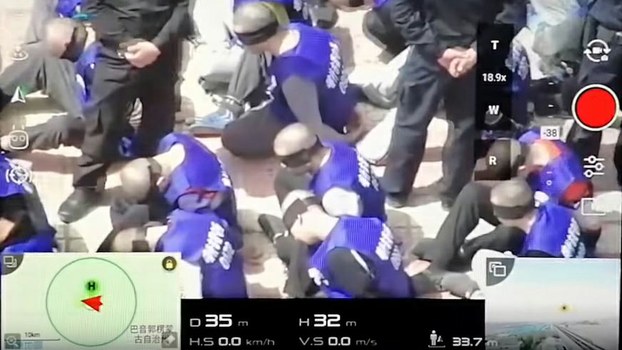 A still image taken from a video purportedly showing hundreds of ethnic Uyghur inmates taken off of a train in the XUAR’s Bayin’gholin Mongol Autonomous Prefecture.

Video footage has emerged of what appears to be authorities in northwest China’s Xinjiang Uyghur Autonomous Region (XUAR) taking hundreds of ethnic Uyghur inmates off of a train in preparation for their transfer to a detention center in a remote part of the region.

Authorities can be seen leading lines of blindfolded and handcuffed inmates—who have had their heads shaved and are wearing either blue or yellow uniforms—off of a train to a heavily guarded waiting area, where they are sat down in columns before being led off to waiting buses.

British media outlet Sky News on Sunday cited a “European Security source” as saying the video is believed to be authentic because it is “typical of the way the Chinese move this type of prisoner,” and that the footage is likely to have been taken earlier this year.

Nathan Ruser, a researcher with the Australian Strategic Policy Institute’s international cyber policy center who has previously identified detention sites in the XUAR, said in a series of posts on Twitter over the weekend that he used landmarks and other clues in the footage to verify the video, and believes it was taken northwest of the city of Korla (Kuerle) in August 2018.

If verified, the footage may shed new light on reports by RFA’s Uyghur Service that authorities in the XUAR have been covertly sending detainees to prisons in remote parts of the region and other areas of China to address an “overflow” in overcrowded internment camps, where up to 1.5 million Uyghurs and other Muslim ethnic minorities accused of harboring “strong religious views” and “politically incorrect” ideas have been held since April 2017.

As global condemnation over the camp network has grown, including calls for international observers to be allowed into the XUAR to investigate the situation there, reports suggest that the transfers may be part of a bid to obfuscate the scale of detentions of Uyghurs and other Muslim minorities in the region.

On Monday, Australia’s Foreign Affairs Minister Marise Payne told news.com.au that she found the video “deeply disturbing” and noted that she had previously raised her country’s concerns over reports of mass detentions in the XUAR.

“We have consistently called for China to cease the arbitrary detention of Uyghurs and other Muslim groups,” she said, adding that Australia will continue to raise its concerns “both bilaterally and in relevant international meetings.”

“It’s clear that ‘Never Again’ is happening again in the 21st century, under the watch of the international community, despite promises to prevent such tragedies,” he said, urging world leaders to speak out against China’s policies in the XUAR at the Sept. 17-30 United Nations General Assembly in New York.

“I call on the United Nations, United States, European Union, and Turkic and Muslim countries to take a strong stand at the U.N. General Assembly and condemn China’s crimes against humanity in East Turkestan, table urgent resolutions in order to close all Chinese concentration camps, and release all Uyghurs and other Turkic Muslims,” he added, using the Uyghurs' name for the XUAR.

The posting of the video footage came as U.S. President Donald Trump on Monday addressed world leaders—including from China—at an event on global religious freedom on the sidelines of the U.N. General Assembly, during which he called on all nations to end religious persecution.

“Stop the crimes against people of faith. Release prisoners of conscience. Repeal laws restricting freedom of religion and belief. Protect the vulnerable, the defenseless, and the oppressed,” Trump said.

A statement released by the office of the White House Press Secretary after his speech said that “the Trump Administration is deeply concerned for the more than 1 million Uighurs interned in Chinese internment camps.”

Vice President Mike Pence told the religious freedom meeting that “the Communist Party in China has arrested Christian pastors, banned the sale of Bibles, demolished churches, and imprisoned more than a million Uighurs in the Muslim population.”

Jewher Ilham, the daughter of jailed Uyghur academic Ilham Tohti, also spoke to assembled dignitaries during the event on global religious freedom, saying "it has become a crime to be Uyghur in China."

"We are witnessing the systematic eradication of ethnic and religious minority identities in China."

The video was also published days before U.S. Secretary of State Mike Pompeo called on Central Asian nations to reject Chinese demands to repatriate Uyghurs to China, where they face repression, saying Beijing’s detention of members of the ethnic group has nothing to do with terrorism, but is an attempt “to erase” minority cultures and religions.

Pompeo made the comments on Sunday during a meeting with the foreign ministers of Kazakhstan, Kyrgyzstan, Tajikistan, Turkmenistan and Uzbekistan on the sidelines of the U.N. General Assembly, and urged all countries “to resist” China’s demands that Uyghurs who have fled the XUAR be sent back home.

On Monday, China’s Ministry of Foreign Affairs spokesperson Geng Shuang told a regular press briefing in Beijing that Pompeo “has tried to smear and vilify China's policy in Xinjiang time and again in a gross attempt to interfere in China's internal affairs,” calling his statement revealing of “the double standard the U.S. applies in counter-terrorism.”

During the press briefing on Monday, Geng said that policies in the XUAR “have produced visible outcomes” and that “people of all ethnic groups there support the government's measures to fight terrorism and safeguard stability,” while reiterating that U.S. officials should “stop making irresponsible remarks on Xinjiang and condoning the violent terrorist forces” that he said seek to split China.

At the Ministerial to Advance Religious Freedom in Washington in July, U.S. Secretary of State Mike Pompeo called the internment camps in the XUAR “one of the worst human rights crises of our time” and “truly the stain of the century.”

U.S. Vice President Mike Pence also slammed the camps “where [Uyghurs] endure around-the-clock brainwashing” and survivors have described their experience as “a deliberate attempt by Beijing to strangle Uyghur culture and stamp out the Muslim faith.”

U.S. Ambassador-at-Large for International Religious Freedom Sam Brownback recently told RFA in an interview that countries around the world must speak out on the Uyghur camps, or risk emboldening China and other authoritarian regimes.

The U.S. Senate earlier this month unanimously passed the first legislation by any nation in response to human rights abuses against ethnic Uyghurs in the XUAR, which would authorize regular monitoring of the situation by various government bodies.