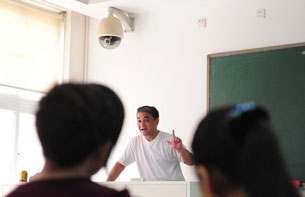 A Uyghur university student has begun an online campaign in a protest against Chinese authorities' repeated refusals to issue her a passport.

Atikem Rozi, 21, who studies at the Central Minorities University in Beijing, began tweeting on the popular Sina Weibo microblogging service this week under her username @Uyghuray, vowing to fight for her civil rights after having been denied a passport three times in the past two years.

Her struggle to gain a passport was also reported on the Uighurbiz.net website run by outspoken Uyghur scholar Ilham Tohti, who teaches at the same university.

"They offered to refund her application fee, but Atikam Rozi rejected the refund and asked for a written explanation why her applications had been rejected."

He said the officials she dealt with had handled her enquiry sympathetically, but had said they were following directions they couldn't change.

Chinese netizens, particular Han Chinese, have rallied to her support online after she posted her story, Tohti said.

"One netizen even changed their online nickname to "Atikam, defending rights," he added. "Many Uyghurs and Han Chinese netizens alike have written in her support online."

Tohti called on the XUAR government to re-think its ban on issuing passports to Uyghurs, who often complain of policies favoring Han Chinese migration into the region and what they call the unfair allocation of resources.

"The extent of the online reaction shows that people won't allow this sort of leadership style to continue," Tohti said.

There are signs that the outcry has already prompted a shift in attitude, as police in Atikam's hometown in Onsu (in Chinese, Xinhe) county have revisited her parents.

Their initial visit had been to persuade her to change her mind about applying for a passport, but the second was to ask how she would support herself if she did go overseas, Tohti said.

Atikam had been consistently told that her application was refused by officials "on political grounds" in her home region of Xinjiang, where Uyghurs and travel agencies have long reported a freeze on the issuing of passports to members of the Turkic-speaking, Muslim ethnic group, Tohti's website Uighurbiz reported.

"Atikam was taken back home [from Beijing] last year after police came to see her because of some things she wrote on Renren," a source close to the student activist said on Monday.

"She had no criminal record, nor had she failed a political studies class, but the relevant authorities used this as an excuse not to give her a passport," the source said.

"She thought this was unreasonable."

According to her online posts, Atikam's last attempt to apply for a passport was on Nov. 17. After waiting for 23 days, she was finally told by the Beijing Immigration and Emigration Bureau that they couldn't give her a passport.

Tohti said a number of students at the same university had been refused permission for passports in recent years, and that this had a huge impact on the options open to them.

"A lot of students have been accepted by overseas universities as students, and some have even paid the fees, or won scholarships," he said.

"But then they were unable to get passports."

One Uyghur student who graduated recently from a university elsewhere in China, and who had managed to get a passport, said it had been taken away from him after he went back to his hometown in Hotan.

The return of the passport was a condition of their continued registration in the town, the student told RFA's Uyghur service.

Tohti said he is also aware of a number of Uyghurs currently overseas who would like to return to China but are afraid the authorities will confiscate or refuse to renew their passports once they are home.

Beijing-based legal scholar Teng Biao said that the rules on the issuing of Chinese passports are clear, as are the circumstances under which passports could be refused.

For example, a passport can be refused if the applicant is the subject of an ongoing criminal investigation, or can't prove their identity, or is considered by the authorities to be a threat to national security or interests.

"This is clearly discrimination against Uyghurs," Teng said. "It is harder for them to get passports than for other people."

He said similar restrictions are in place for Tibetans, too.

"There are some cases in which they have been given a passport, and then had it taken away from them again," Teng said.

"Also, even if they have a passport, it's a bit harder for them to actually leave the country than it is for Han Chinese."

An employee who answered the phone at the Beijing Entry and Exit Bureau said a new regulation that took effect on Sept. 1 now requires universities to take initial applications from Uyghur students in Beijing who wish to apply for passports.

"Once the application has been prepared, the students can apply online. And they can't get the passport in Beijing without their application being approved first," the employee said.

She said other applicants can go straight to the bureau's website and submit their application, which typically take about 30 days to process.

"This also includes an approval process, and we will get in touch with the person if there are any problems with their application," the employee said.

Chinese authorities in Xinjiang have imposed travel restrictions on the region's ethnic minorities since the regional capital Urumqi was rocked by deadly ethnic rioting in 2009, local residents and travel industry sources have said.

Travel agencies told RFA in 2010 that while there had been no formal declaration of the restrictions, the regional government's nationalities and religious affairs committees had simply stopped processing permission slips for Uyghurs, which are not required from Han Chinese.

Ethnic Uyghurs in Urumqi took to the streets en masse in July 2009 in an initially peaceful demonstration to protest a violent attack weeks earlier against Uyghur migrant workers in far-off Guangdong province, which officials allegedly failed to quell promptly.

The clashes in Urumqi left some 200 people dead, according to official figures.

Xinjiang is home to mostly Muslim ethnic Uyghurs, Kazakhs, and Tartars, among other recognized ethnic groups.

They declared a short-lived East Turkestan Republic in Xinjiang in the late 1930s and 40s but have remained under Beijing's control since 1949, with many calling for independence.

Reported by Hai Nan for RFA's Cantonese service, and by Mihray Abdilim for the Uyghur service. Translated from Chinese by Luisetta Mudie and from Uyghur by Dolkun Kamberi. Written in English by Luisetta Mudie.

All Uyghurs are denied passport by the Chinese government, thus, the Chinese Communist Party have turned all Uyghurs into stateless people without citizenship on their own homeland.