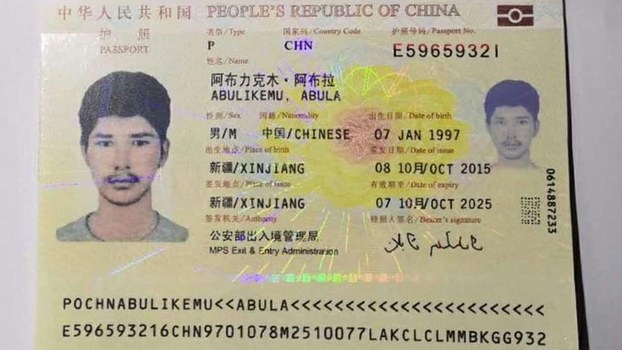 A young Uyghur man living in exile in Turkey returned safely to Istanbul late on Wednesday after facing possible deportation to China following his detention by Moroccan authorities, according to a family member.

Ablikim Abla, a 22-year-old ethnic Uyghur and Chinese national, was arrested by police in Morocco after arriving at Casablanca’s Mohammed V International Airport on Sunday, en route to Germany, and had warned relatives in Istanbul that he might be deported to China, where he could face persecution.

“He returned to Istanbul a few hours ago—he sent me a text around 4:00 p.m.,” he said, adding that he was “not exactly sure about the situation surrounding his return.”

An immigration officer who answered the phone at Mohammed V International Airport told RFA that he had no information about Abla, and details about why he was detained there were not immediately available.

According to family members, Abla’s parents took him to Turkey from their home in northwest China’s Xinjiang Uyghur Autonomous Region (XUAR) in 2016 to enroll in school, but were detained upon their return to the seat of Aksu (in Chinese, Akesu) prefecture’s Aykol township, where they live and work as farmers.

While Abla’s mother is believed to have been released, his father, Abla Jelil, was sentenced to 10 years in prison for sending his son to Turkey, a country with a substantial Uyghur exile population that is blacklisted by authorities for travel by Uyghurs due to the perceived threat of religious extremism.

A spokesperson with New York-based Human Rights Watch told RFA on Wednesday that the organization is investigating Abla’s case, but was also unclear why he might have been detained.

“We would like to reiterate that no one should send Uyghurs back to China these days, given the very high likelihood of persecution,” the spokesperson said in an email.

Last month, a Uyghur man facing deportation to China from Qatar said that his decision to flee Pakistan was prompted by claims that nine members of his ethnic group had been forcibly returned home from the South Asian nation, where he ran a company with ties to a Beijing-backed infrastructure plan.

Ablikim Yusup, 53, arrived safely in the U.S. in early August with the help of U.S. Embassy officials after initially trying to reach Europe by way of Bosnia, which refused him entry and had sent him to Qatar, where authorities said they would deport him to Beijing, according to media reports.

Yusup had appealed for days for help on social media posts from Qatar’s Doha International Airport, saying that he feared for his safety if sent back to China.

Also last month, sources told RFA that a woman and her two toddler daughters were deported to China from Turkey via Tajikistan in June and now face persecution from authorities in the XUAR.

Zinnetgul Tursun and her daughters, Hilal Shehinur and Banu Abdullah, were first sent from Istanbul, Turkey to Tajikistan’s capital Dushanbe, and then taken by Chinese police officers on a June 31 flight from Dushanbe to the XUAR capital Urumqi, according to her sister, who lives in exile in Saudi Arabia.

On Tuesday, at an event on the side lines of the United Nations General Assembly in New York, U.S. Deputy Secretary of State John J. Sullivan said that the U.N. had failed to hold China to account over its policies in the XUAR and should demand unfettered access to the region to investigate reports of the mass incarceration and other rights abuses against ethnic Uyghurs.