Did Pakistani officials pressure a Uyghur-language school into closing its doors?
2010-05-20
Tweet 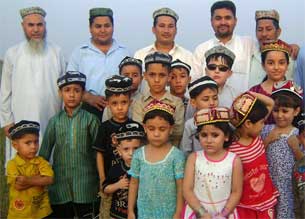 Members of the Omer Uyghur Foundation and language school pose for a photo in Rawalpindi, Pakistan in February 2010.
RFA

HONG KONG—A Uyghur language school in northern Pakistan has been shuttered following orders from authorities acting on pressure from Beijing, according to school officials.

The Omer Uyghur Language School in Rawalpindi, in the Majha region of Punjab province, closed its doors in April after Chinese Embassy officials spoke with the Pakistani government and the school’s landlord, accusing school officials of maintaining ties with an organization that it says promotes Uyghur independence from China.

The school had also faced fierce competition from a new institute established by the Chinese Embassy called the Big Montessori School—built directly in front of the Omer Uyghur Language School and opened for classes on April 7, 2010, Omer school officials said.

Omer Khan, 35, who co-founded the Omer Uyghur Language School with his brother Akbar in March 2009, said he is trying to convince the Pakistani government to allow him to reopen.

His brother, Akbar, said the Uyghur community “simply wants a place to learn the Uyghur language and has no political motivations.”

The Big Montessori School has yet to conduct classes in the Uyghur language, despite a pledge from Chinese officials that it would do so, in addition to providing all fees for attendance and school materials.

Classes are currently conducted in Urdu and English, according to local members of the Uyghur community.

A former employee of the Omer Uyghur Language School, who asked not to be named, said the Chinese Embassy had also distributed 5 million Pakistan rupees (U.S. $60,000) to the Pakistan Chinese Uyghur community in Rawalpindi, which it said was to be used for the new school it had established.

“The Chinese government spending money on a new school is only going to create problems for the Uyghur community here. They just want to start trouble by saying there are links between our school and the World Uyghur Congress,” the employee said, referring to the Munich-based organization China accuses of promoting Uyghur independence.

“The new school is not teaching Uyghur. I’m very disappointed because the Omer School has been shut down and the new school was built directly in front of the former school,” he said.

Raza Han, president of the Big Montessori School, has served as a liaison between the Chinese Embassy in Pakistan and the Pakistan Chinese Uyghur community in Rawalpindi, of which he also serves as president.

When contacted by telephone in Uyghur for comment, Raza Han seemed unable to communicate clearly.

“I am not a Uyghur,” Raza Han stuttered, before refusing to answer further questions.

The former employee at the Omer School said he could not understand why Raza Han had been put in charge of the Uyghur community, or of the school that was meant to provide the community with language and cultural classes.

“How can Raza Han claim to be the head of the Chinese Uyghur community in Rawalpindi if he is not even a Uyghur?” he asked.

The Omer school opened for classes in March 2009 with only 17 students, but the student body quickly grew to more than 100 after only one year of operation.

In interviews last March conducted in Uyghur with students between the ages of six and 12, the children demonstrated ability and said they were enjoying learning the language.

Many parents interviewed said they were happy their children had the opportunity to learn their mother language in Pakistan.

But the Pakistani government began making problems for Omer Khan and his family as early as 2009, when local officials would make unannounced visits during class hours to confirm that the school was not teaching anything outside of an accepted language program.

And after the Chinese-funded Big Montessori School opened directly in front of the Omer Uyghur Language School, many of the students began to transfer to the newer school.

In April this year, Omer and Akbar Khan said they had fled from police after neighbors told them their close relatives had been detained for several hours.

At the time, Omer Khan had applied for a Belgian visa to attend a training program for Uyghur activists outside China.

The brothers blamed China, rather than their adopted homeland, and said the raid came in response to pressure from Beijing on the Pakistani authorities to step up pressure on Uyghur exiles, many of whom are vocal campaigners for independence for the northwestern region of Xinjiang.

According to Omer Khan, more than 3,000 Uyghur families live in Pakistan, predominantly in the cities of Rawalpindi, Karachi, Gilgit, and the capital, Islamabad.

Rawalpindi is home to nearly 1,000 Uyghurs or about 300 Uyghur families, Khan said.

The majority of Uyghurs in Rawalpindi moved to the city in 1960 from Hoten or Kashgar in China’s northwestern Xinjiang Uyghur Autonomous Region.

Uyghur exiles fear surveillance once they leave China, especially if they have left family behind, and they say their fears have worsened since deadly ethnic riots last July—which prompted a major security crackdown.

Xinjiang has been plagued in recent years by bombings, attacks, and riots that Chinese authorities blame on Uyghur separatists.