Nearly a dozen Uyghurs repatriated from Malaysia to China are sent to prison for ‘separatism.’
2012-12-20
Tweet 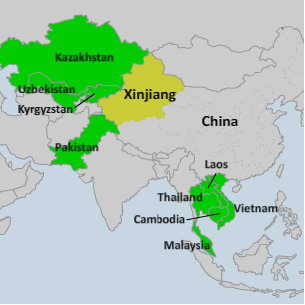 A group of 11 Uyghurs repatriated from Malaysia to China last year has been sentenced to prison on separatism charges, according to a relative and friends in their hometown. 11

Chinese authorities have not revealed what happened to the group since they were repatriated in August 2011 as part of what rights groups said was Beijing’s “coordinated campaign” to pressure neighboring countries into extraditing members of the mostly Muslim Uyghur minority who had fled persecution in their homeland in the restive Xinjiang region.

But the mother of one of the men told RFA’s Uyghur Service this month that her son is serving a three-year sentence for separatism in Hotan prison in Xinjiang, following a secret trial in July.

Friends of his and the other 10 deported men said they have heard that the others had also been thrown in jail for up to 15 years, though they did not wish to be named and the sentences could not be confirmed.

Kurbanjan Sirajidin Ahmet Sadiq, who had been living legally in Malaysia for five years before he was deported back to China, was given a six-year jail sentence for separatism that was later reduced to three years, his mother Haniyaz’han Ahmet Sadiq said.

“They accused him of separatism and sentenced him to jail,” she said, adding that he has denied the charges and insisted he has nothing to do with separatism.

"In July this year, there was a court session for him and he was sentenced to six years. But we were not allowed to enter the courtroom,” she said, adding that the term was later reduced to three years.

Family members have not been allowed to visit him but have been told he is in Hotan prison, she said.

“His father and I are both very ill, and I worry we will not live to see him released,” she said. “Three years is too long.”

Friends of his who were contacted by RFA and who did not wish to be named said that they heard others had been given sentences ranging from 11 months to 15 years.

Hotan police contacted by RFA refused to comment on any of the deportees.

Haniyaz’han Ahmet Sadiq said she believes her son is innocent but added that Chinese authorities consider him and the 10 other deported men to be separatists.

“We believe he is innocent, but the government believes he is a separatist because he helped 10 other Uyghurs with translation issues in Malaysia, and they accused him of separatism, sentenced him to jail,” she said.

“The [Chinese] government said these 10 Uyghurs were separatists because they crossed the Chinese border illegally without passports.”

Kurbanjan Sirajidin Ahmet Sadiq, who is married to a Malaysian woman and ran a restaurant in an Islamic university in Kuala Lumpur, is fluent in Malaysian and English and frequently helped newly arrived Uyghurs with language issues. Sources said he had assisted UN refugee agency staff as a translator several times.

He and the 10 other deportees were among 16 Uyghurs detained by Malaysian police in separate raids in Kuala Lumpur and Johor Bahru city on Aug. 6 of last year.

The Malaysian police said they had busted a Chinese trafficking ring which was falsely trying to claim United Nations refugee status for its victims after smuggling them into the country.

UNHCR officials said the agency had tried to meet with the men before they were deported but were refused permission by Malaysian authorities.

A lawyer who helped the group of Uyghurs while they were in Kuala Lumpur, Anwar Ismail, said he believes the men are innocent of the terrorism and separatism charges leveled at them and should not have been sent to China.

The lawyer said the Uyghurs were arrested by Malaysia's counterterrorism police for violations of Malaysia's security laws.

He said that if Malaysian authorities had been given evidence from China that the deported Uyghurs had committed other crimes that warranted them being extradited, then they should have provided proof.

“China has no proof. If China had proof, the Malaysian government would have disclosed this proof,” he told RFA’s Uyghur Service.

He urged the Malaysian government not to allow any more Uyghurs to be deported to China.

"I feel deeply sorry about the deported people. The Malaysian government should learn what happens when they deport Uyghurs,” Anwar said.

The Malaysian counterterrorism police unit contacted by RFA refused to comment on the case.

Many of the Uyghurs who have been deported were fleeing China’s restive northwestern Xinjiang region, where they say they face discrimination, which fueled deadly riots in 2009.

Phelim Kline, the deputy director for Asia at New York-based Human Rights Watch, said that China has kept the fate of repatriated Uyghurs such as the 11 from Malaysia under wraps.

“There is zero transparency on the Chinese side in terms of determining what exactly the situation is for these people who were detained and returned to China.”

Rights groups have accused Malaysia of violating legal due process by deporting them instead of charging them under international law.

Kline said that Malaysian authorities were obligated to explain what legal procedures had occurred.

“They are obligated to ensure these Uyghurs were not forcibly returned,” Kline said.

“If so, they need to explain why they violated due legal process by turning over these Uyghurs to Chinese jurisdiction after the raids which resulted in detention in Malaysia,” he said.

A Uyghur woman in Kuala Lumpur who knew the 11 deported men said they had not been involved in any terrorist or separatist activities.

“Most of these people are farmers that have not received much schooling.... I believe that they do not even understand what ‘separatism’ or ‘terrorism’ mean,” she said, speaking on condition of anonymity.

She said the group had fled to predominantly Muslim Malaysia because they faced political repression in Xinjiang.

“They came to Malaysia to look for a better life. This is because life is harsh for Uyghurs in East Turkestan due to Chinese control,” she said, using a Uyghur term for the Xinjiang region.

She said the deportations were a way for China to impose more pressure on Uyghurs in Xinjiang.

China has fail to punish Vietnam a terrorist regime which committed genocide to Degar people in Central Highland of Vietnam.

Uyghurs are Muslim as well as Malaysians.
The Malaysian Government and Malaysian police are doing good jobs.
Sometimes Malaysian five police men rapes single Indonesian Muslim girls, who came in Malaysia to earn for living for their families in back home.
I think Malaysian Government officials and police might have already gone to Mekah as well. What did AllAh teach them to do? Well done Malaysia, you hand over your brother and sister to the hand of Evils. You all will be Just by the ALLAH!