‘I Wish I Could Wipe my Heart And Mind Clean’: Uyghur Former Camp Instructor 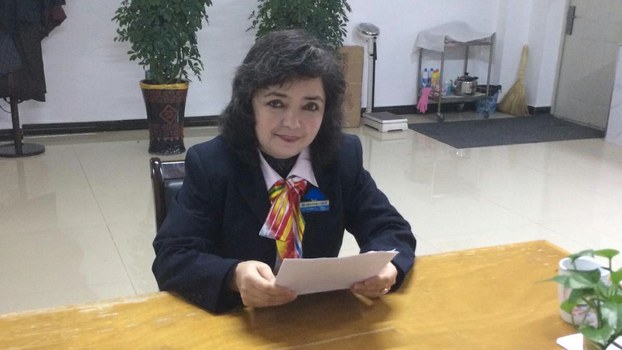 Qelbinur Sidik prepares a lesson in her office in Urumqi, in an undated photo.

Qelbinur Sidik, 51, is one of the few people to relate their experiences working at a facility in the vast network of internment camps in northwest China’s Xinjiang Uyghur Autonomous Region (XUAR), where authorities are believed to have held up to 1.8 million Uyghurs and other Muslim minorities since early 2017. A well-respected instructor who began teaching children Mandarin Chinese at the No. 24 Elementary School in the XUAR capital Urumqi in 1990, Sidik was forced to teach the language at a men’s camp known as Cang Fanggou between March and September 2017, as well as at a women’s camp at a former nursing home in the city’s Tugong district between September and October of that year. Sidik, who now lives in the Netherlands, estimates that the two camps held around 3,000 and 10,000 detainees, respectively.

Since fleeing China, Sidik says that she has been unable to contact her family in the XUAR, other than receiving a phone call from her husband in February this year to request a divorce, shortly before he disappeared. She believes her husband, who works for a construction supply company, made the request to save himself from the political fallout associated with her decision to leave the country. In a recent interview with RFA’s Uyghur Service, Sidik provided rare insights into the management of the XUAR’s camp system. But she said that despite her freedom, she is still haunted by abuses she regularly witnessed in the camps—rights violations that directly contradict Beijing’s claims that the camps operate as voluntary “vocational centers” in which “students” are treated humanely.

RFA: How did you end up teaching at the camps?

Sidik: On Feb. 28, 2017, the school principal called me in and told me I needed to go to a government office, a Party office, for a meeting … What they told us was that there was a school for illiterate people, and we would be teaching Chinese there starting March 1, 2017. They said that it was going to be secret, and that we should not tell anyone about what we saw and heard in the place where we were going to be working.

A driver took us there led by the police. It was a new facility; the buildings had gray exteriors. The compound was surrounded by walls, fences, and barbed wire. They opened the front gate—it was electric—and everyone was surprised when we went into the compound. “What kind of school for the illiterate is this?” we wondered, because there were armed police and military personnel guarding the grounds. In that very moment, I thought to myself that it looked like a camp of some sort, but it was a difficult thought to entertain.

They opened up another electric door for us to go through and we went into a building. They turned on camera streams for us. The first one was coming directly from a classroom. Some of the men started coming out, and I could see that their hands and feet were tied up. Their steps were heavy. I just stood and watched them. Then they went into the classroom. There were also camera streams coming from cells on either side of the classroom, and the cells were open. The windows were sealed off and the insides of the cells were dark. When I went into the classroom, the students were quiet. There were no tables. They were sitting in small chairs … Because they’d all just been brought in, the men still had beards [that were later cut off]. I noticed many of them looked like religious people, religious leaders. I said “assalamu alaykum” to them, and they all sat there quietly and said nothing. I realized I’d said something wrong. “Let’s get started,” I said, and began teaching.

RFA: What did you see in their expressions?

Sidik: Some of them were sitting and crying. They were sitting there with a sense of longing, an expectation that I was there to save them. I could see it in their faces. There were cameras, eight of them. Immediately I gathered myself and started class. I just tried to teach class as best I could.

RFA: How did the police treat everyone inside?

Sidik: They were very tough [on people] … Once class started, [students] didn’t have permission to ask questions, and they were absolutely not allowed to speak in Uyghur. All the books and materials we used had to stay in the classroom, and it wasn’t possible for us to bring phones inside. So horrific, such threats. 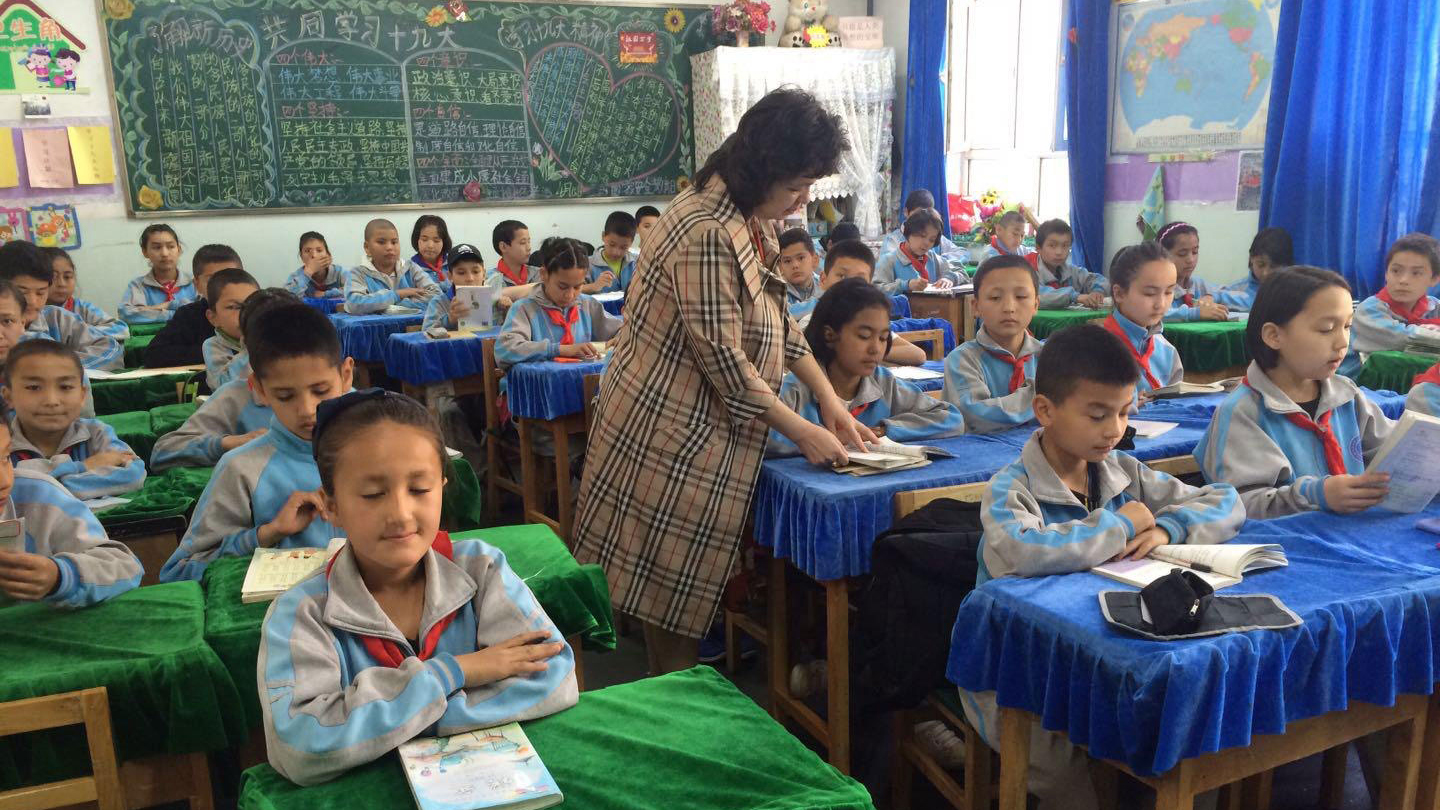 Sidik: They assigned me, once again involuntarily, to work at a women’s camp at Tugong starting September 1, 2017.

RFA: How many women had been locked up in that camp?

Sidik: I think it was around 10,000. The buildings had six floors and on every floor there were 20 cells. There were 40, 50, 60 women in some cells … The women’s camp was even tougher. Such fear. It was even more closely guarded than the men’s, and there were fenced-off areas you had to go through as you moved between floors, so tightly closed off that not even a fly could get through.

For the men, there was only one toilet … The men had one minute to use the bathroom and one minute to wash their hands and face. There was no shower for the men. They never got to take a shower. As for the women, there was a partial wooden wall … that they put up inside the cell and the toilet was behind that, inside the cell. They went to the bathroom in a bucket, taking turns each day. There was a communal shower, and every woman got to shower for 10 minutes once per month.

There were armed police everywhere, guarding the place. There was a fence between the students and me while I taught … We would get last-minute assignments and have to spend the evening preparing to teach them the next morning. They would tell us we had to teach “red” (political) songs. The students had to memorize them. We might teach a couplet one day and they would test them back in the cell. They wouldn’t give food to someone if they couldn’t recite it.

‘Sounds of screaming voices’ at lunchtime

RFA: Can you describe what interrogations were like in the camps?

Sidik: In the men’s camp I heard, and I saw, that there was an interrogation room underground. Sometimes when I was teaching class, the police would come and take people away to go there. We could hear them while we were in class, the sounds of screaming voices. It would happen at lunchtime. I wondered what kind of interrogation they were even doing. I’d seen things like this on TV and wondered whether it was really so terrifying. It was.

I heard about a man who got very badly hurt in the process of interrogation. They wouldn’t give him medicine or treat him, and the wounds festered. Later, they finally took him to the hospital but weren’t able to save him, and he died. I also heard about people who lost their minds, who went crazy.

I came across a police officer acquaintance of mine who worked in the [women’s] camp and was able to get some information from her. We would speak occasionally in the hallways, in places on the camp grounds that didn’t have cameras. She told me things in secrecy, like that … the police officers would take groups of four or five girls in for interrogation and take turns with them.

You can’t see and hear these things and think they’re simply committing cultural genocide or that this has to do with religion. This is about eliminating the Uyghurs … I’ve seen it with my own eyes, and I have to make sure others hear about it … I can’t sleep at night. I see all of these things as if they’re in front of my eyes again. It would be great if I could just live in peace. I can’t smile anymore. I wish I could simply wipe my heart and mind clean.

There would have been no reason for the interviewed multilingual Uyghur teacher to have made anything up. Moreover, her account of how Uyghur inmates in the internment camps were physically and mentally abused by their captors resonates with most accounts of ex-inmates who escaped from the PRC.

The CIA also tells the truth. Many of your friends work for them. They are the good guys. The Chinese people should be free, and if the CIA can help the Chinese people, they will. The communists will be captured by the people themselves, who surround and outnumber the Gang of Xi and prosecuted for genocide one day like the others in the past.

The interview is a very well-written piece of anti-China propaganda by the CIA.

It's good to hear the truth from someone that saw the goings on in the 're-education camps'.