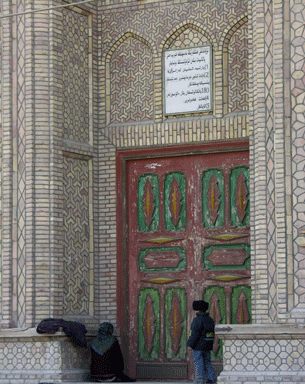 A sign outside a mosque in Xinjiang saying, "No one under 18 may enter."
RFA/Erkin Tarim

The new directive, drawn up by officials in Shayar county, in Xinjiang’s central-western Aksu prefecture and originally posted online April 20, is the first of its kind to be published openly in the region.

Authorities in Xinjiang frequently require religious groups to submit texts and curricula for examination before they may be used in worship or in school settings, but the government hasn't previously acknowledged this.

The directive contains 10 measures that it says aim to “strengthen village management of grassroots religious organizations.”

They include the requirement that all religious groups register with the village branch of the religious affairs department, allow monthly inspections of religious sites and special meetings with authorities, and obtain prior approval of the content of any religious services.

“Religious teachers are strictly prohibited from using nonapproved texts, and no person may conduct religious activities outside of pre-approved religious sites or face investigation as a ‘wild [nonsanctioned] imam.’”

The regulations also prohibit any officials or members of the Communist Party from taking part in religious services.

Uyghurs in Aksu prefecture are among those who have chafed most strongly against Chinese rule in recent years.

Shayar county is located near Kucha, where up to 10 alleged Muslim attackers were reported killed after assaulting a local police station Aug. 10, 2008. 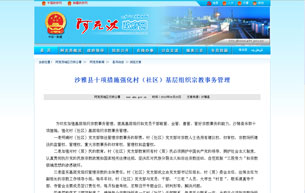 A screen shot of the new policy to manage religious affairs taken from the Shayar county government Web site, May 25, 2010. Credit: RFA RFA
Residents said the new regulations reinforce practices religious affairs officials have carried out in the region for years.

One resident, who asked not to be named, said local imams strictly adhere to government rules on religious services.

“They speak according to what they are told. If they speak outside of the guidelines they will get into trouble. The people are silently unhappy, even if they can’t speak out. They believe that the imams are not speaking the truth—that they are hiding the truth,” the man said.

“Officials come once every 15 days and ask them what they have been talking about, what the situation in the mosques is like, and tell them to report if there has been anyone from outside the community leading religious services.”

The resident said that before every Friday prayer service, authorities come to check on the religious community.

“Every Friday, government officials stand guard on each side of the mosque doors to check to see if there are students or Party members. If there are any, they block them from entering and charge them with breaking the rules. The people are from the township government,” he said.

He said religious leaders chosen by the community are almost never approved by the local religious affairs department.

“They ask religious people and imams to come in for a meeting every 15 days. If we elect an imam who speaks the truth, the government would find every kind of excuse ... and would not approve him.’”

Shayar county is located about 500 kms (300 miles) south of the Xinjiang regional capital Urumqi and is home to an estimated 225,000 people, according to an official Chinese census conducted in 2006.

Ethnic Uyghurs make up more than 92 percent of the total population, while Han Chinese comprise about 7 percent, making Shayar one of the counties with the largest majority of Uyghurs in all of Aksu prefecture.

Many Uyghurs in the county resent being governed by a minority population and have increased resistance to Chinese rule in recent years.

During the holy Muslim fasting month of Ramadan, when eating is proscribed until sundown, local residents reported that Chinese authorities in the area implemented a campaign to offer free lunches.

Uyghur exiles say that Chinese authorities have previously offered free lunches during Ramadan as a means of determining who is fasting.

But disputes also spill over into secular life in the region, as many Uyghurs complain that they feel treated like second-class citizens in their own homeland.

On Jan. 29, 2009, an argument at a Chinese-owned Internet café in Shayar township, seat of Shayar county began when a Uyghur who had been playing video games accidentally stepped on the foot of a security guard, according to local Uyghur residents.

A group of security guards locked the doors to the café and began to attack the young man and several of his friends, according to accounts.

The incident was clearly visible through windows facing the street, causing a large crowd of Uyghurs to throw stones and chairs into the café, breaking in and rescuing the young men.

Six Uyghurs were hospitalized and five detained for inciting a riot following the event.

On Aug. 10, 2008, a group of Uyghurs including two women attacked a police department and other government buildings with explosives in neighboring Kucha county.

The incident left 12 dead, including five of the attackers, who died following a confrontation with police in a Kucha marketplace.

When discovered, two of the attackers detonated suicide bombs. Three were shot dead by police.