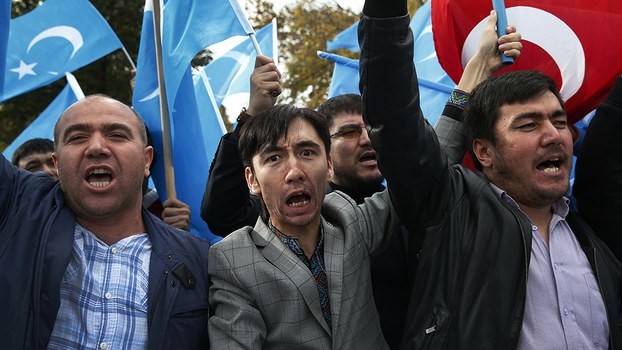 Members of the Uyghur community in Turkey carry flags and chant slogans during a protest in Istanbul, Nov. 6, 2018.

At least three ethnic Uyghurs have recently been deported to China from Turkey via Tajikistan, according to sources, and now face persecution from authorities in the Xinjiang Uyghur Autonomous Region (XUAR).

Jennetgul Tursun, who lives in exile in Saudi Arabia, said she had learned that her sister, her sister’s husband Abdullah Ahmedov, and their two children were held at an immigration detention center in the Turkish city of Izmir and declared Tajik nationals before being given Tajik passports and sent against their will to Tajikistan in late June, despite being legal Turkish residents.

Jennetgul Tursun said that two Tajik passengers on the June 31 flight had seen Zinnetgul Tursun and her children detained by Chinese police at Dushanbe International Airport and taken onto the plane to Urumqi, and sent text messages about the incident to a Uyghur exile group in Turkey, which forwarded the information to her. No information was provided about Abdullah Ahmedov.

“I know my sister very well, and she would never have boarded that flight [to Urumqi],” Jennetgul Tursun told RFA.

“I learned that they were given drugs that knocked them unconscious prior to being placed on the plane, and on the flight they regained consciousness. The two Tajik passengers witnessed what had happened, so they sent messages revealing what they had seen.”

The Tajik passengers said that they saw five other people—four women and a man—they identified as Uyghurs on the flight, suggesting that they had also been deported to China against their will.

“When my sister called me the last time from the Izmir detention center, she said there was a 22-year-old [Uyghur man] from Hotan (in Chinese, Hetian) prefecture [in the XUAR] who had been helping her,” she said, adding that she believed he could be the young man the Tajik passengers said was on the flight.

Jennetgul Tursun told RFA that she spoke with her mother in Ghulja (Yining), in the XUAR’s Ili Kazakh (Yili Hasake) Autonomous Prefecture, on July 25, who confirmed Zinnetgul Tursun and her children had been brought home, but said her sister had “disappeared” and that the family had no information about what had happened to her, before warning her to end further communication.

No mention was made of Abdullah Ahmedov’s situation, and Jennetgul Tursun suggested that he might still be in Tajikistan.

Jennetgul Tursun’s account of her sister’s deportation followed a July 26 tweet by Uyghur scholar and linguist Abduweli Ayup, which said Zinnetgul Tursun had been “deported to China from Turkey,” citing a confirmation by Turkish immigration authorities and suggesting that the move was “related to [a] criminal extradition agreement between [the] two countries.”

The tweet, which was accompanied by a photo of Zinnetgul Tursun’s Turkish residence permit, also noted that “international human rights organizations had been criticising Turkey” over its reluctance to confront China about its policies targeting the Uyghurs in the XUAR.

In February, Turkey’s Foreign Ministry issued a rare statement of criticism against China by a majority Muslim nation, demanding that authorities close a vast network of internment camps, where more than 1.5 million Uyghurs and other Muslim minorities accused of harboring “strong religious views” and “politically incorrect” ideas are believed to have been held in the XUAR since April 2017.

But during a trip to China last month, Turkish President Recep Tayyip Erdogan pledged security cooperation with Beijing and said that residents of the XUAR live happy and prosperous lives under Beijing’s rule, according to Chinese state television.

Days after Ayup’s tweet, the Turkish media ran several articles about Zinnetgul Tursun’s deportation, citing Jennetgul Tursun and sources from local Uyghur rights groups, which suggested that authorities had “failed” to protect her from persecution in China.

On July 28, Suleyman Soylu, Turkey’s Minister of the Interior, and Abdullah Ayaz, the deputy director-general of Migration Management, held a press conference in Kahramanmaras city, during which Soylu said that Zinnetgul Tursun had applied for a long-term residence permit, but was only granted a temporary one.

He went on to say that Turkey would “never return anyone to a country where they might face torture or human rights abuses,” without providing further details about Zinnetgul Tursun’s case.

Later, Turkey’s Directorate General of Migration Management (DGMM) issued a statement saying that on May 21, under the cover of night, a woman illegally entered the country from Syria without proof of identity, “who claimed to be a Chinese citizen named Zinnetgul Tursun.”

The statement said that the woman was transferred to the Harmandali (Izmir) Detention Center in Turkey’s Hatay province where a joint investigation with Tajik authorities concluded that she “was, in fact, a Tajik national named Rahima Ahmedova.”

“Rahima Ahmedova … her children Hilal Shehinur and Banu Abdullah, and her husband Abdullah Ahmedov, have been deported on a flight from Istanbul Airport to Tajikistan’s Dushanbe Airport,” the statement said.

The statement did not confirm whether Zinnetgul Tursun and her children had been sent on from Tajikistan to the XUAR in China, or what had become of her husband.

Jennetgul Tursun told RFA that the Turkish government’s actions were in violation of international laws concerning non-refoulement, which forbid countries receiving asylum seekers from repatriating them to countries where they face persecution based on race, religion, nationality, or membership of a particular social group or political opinion.

“[The Turkish government's] insistence that my sister is from Tajikistan and their decision to deport her there, led to her repatriation to China, which goes against international law,” she said, noting that Turkey is a signatory of the United Nations Human Rights Convention.

“I appeal to the Turkish government to bring my sister, along with her two daughters, back to Turkey, because it is impossible for them to ignore that there is persecution in China. Despite this knowledge, they labelled my sister a citizen of Tajikistan and, from there, they handed her over to China … I will not stop pursuing this matter, and I demand that they bring my sister back.”

Zinnetgul Tursun’s case has caused consternation in Turkey, which is home to around 35,000 Uyghurs and has been widely considered a safe haven for members of the ethnic group who have fled repression in the XUAR.

On July 30, Turkey’s Karar Daily said it had identified two women among the five other Uyghurs believed to have been deported on the June 31 flight from Dushanbe to Urumqi as Quwanhan Hemze and Ainisa Tursun.

RFA recently spoke with Quwanhan Hemze’s son, Abdurusul Tuniyaz, who said that the last time he had spoken with his mother was on June 23, while she was being held at the Izmir detention center with Zinnetgul Tursun, but cited her lawyer, Ayshe Gul, as saying that she had been deported to Tajikistan.

“I hadn’t been able to get a hold of my mother for more than 10 days, so I became very worried and called her lawyer, who said she was sent to Tajikistan [at the beginning of July],” he said.

“The lawyer said she had requested information from the court regarding where my mother was sent, whether or not she is still in Tajikistan, and how Tajikistan dealt with her case, but we haven't received any response yet.”

Ayshe Gul declined to comment when asked by RFA for further information about Quwanhan Hemze’s case, saying she needed her client’s permission to speak with the media.

Earlier this week, a Uyghur man facing deportation to China from Qatar said that his decision to flee Pakistan was prompted by claims that nine members of his ethnic group had been forcibly returned home from the South Asian nation, where he ran a company with ties to a Beijing-backed infrastructure plan.

Ablikim Yusup, 53, arrived safely in the U.S. on Tuesday with the help of U.S. Embassy officials after initially trying to reach Europe by way of Bosnia, which refused him entry and had sent him to Qatar, where authorities said they would deport him to Beijing, according to media reports.

Yusup had appealed for days for help on social media posts from Qatar’s Doha International Airport, saying that he feared for his safety if sent back to China.

While Beijing initially denied the existence of the camps, China this year changed tack and started describing the facilities as “boarding schools” that provide vocational training for Uyghurs, discourage radicalization, and help protect the country from terrorism.

Claims by China last week that it has already released almost all of those held in the camps were met with skepticism by human rights and Uyghur exile groups, who said that Beijing is seeking to blunt demands for accountability for its treatment of Muslim ethnic groups in the Xinjiang region.

Too bad, the US failed to prevent them from being deported to China, unlike Ablikim Yusup. Better luck next time, Uncle Sam.