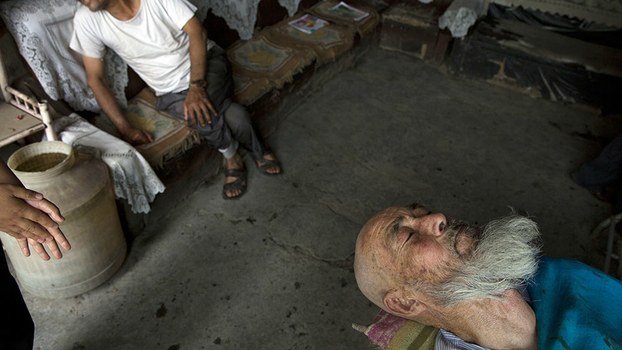 An elderly Uyghur man prepares to get his beard massaged at a barber shop in the city of Aksu, July 17, 2014.

More than two dozen Uyghurs have died in “political re-education camps” in one county of northwest China’s Xinjiang Uyghur Autonomous Region (XUAR), according to officials from the area, who said most were elderly detainees that succumbed to complications from high blood pressure.

Beginning in April 2017, Uyghurs accused of harboring “strong religious views” and “politically incorrect” views have been jailed or detained in re-education camps throughout the XUAR, where members of the ethnic group have long complained of pervasive discrimination, religious repression, and cultural suppression under Chinese rule.

Recent reports suggest authorities are rapidly building “burial management centers,” complete with crematoria, throughout the region in a bid to subvert ethnic traditions and remove the religious context from funerary rites.

Members of the exile community say that authorities use the crematoria to secretly “deal with” the bodies of Uyghurs who have been killed by security forces during protests against Beijing’s policies in the XUAR, or who have died under questionable circumstances in re-education camps.

An officer at the Chinibagh village police station in the seat of Hotan (in Chinese, Hetian) prefecture’s Qaraqash (Moyu) county recently told RFA’s Uyghur Service that around 40 percent of the more than 1,700 resident of his home village of Yengisheher had been detained in re-education camps.

When asked whether any of the detainees had died, the officer said “there are 13,” but deferred questions about those who had died in Chinibagh to his superiors.

RFA was able to contact an official who oversees both Yengisheher and a neighboring village called Konasheher, with a similar sized population, who said that 13 people had died in each of the villages since authorities began detaining Uyghurs last year.

“All I know is that there were 26 people who have died in re-education camps,” the official said, adding that he did not know the circumstances under which they expired or where their bodies were taken.

“[We learned this information] at a village committee meeting, but we were only given the number of people who died.”

A security officer with jurisdiction over both Yengisheher and Konasheher corroborated the number of dead to RFA.

“I have heard there has been 26 deaths from two districts so far—more males than females,” he said, adding that none of the deaths were the result of physical abuse during detention.

“The weather conditions are not good and a majority of the elderly people suffer from heart problems, such as high blood pressure. They are unable to adapt to the conditions they are being held in. But that is just my opinion—I can’t provide you with detailed information, as I wasn’t present at the [deaths].”

The security officer also confirmed a report of a younger man from Qaraqash township who died in detention at one of the area camps last week.

“As far as I know, it was Ablet, a 37-year-old fruit merchant,” he said, adding that the man had died after being brought to a local hospital for treatment.

The officer said he was unsure of Ablet’s family name, but knew he was a father of three and that he ran a shop in the town’s wholesale market.

“He suffered from [a precondition of] high blood pressure, and he died from a brain hemorrhage,” he said.

“He was extremely nervous and anxious while he was being held at the camp … and as he suffered from high blood pressure, the anxiety caused bleeding in the brain.”

Ablet died “less than two or three hours” after being brought for treatment, the officer added.

Reports suggest that authorities have no age limit for incarcerating Uyghurs in the XUAR, and countless numbers of the elderly are being held in re-education camps throughout the region—many of whom have been targeted for taking part in a pilgrimage to Mecca or are retired officials who have joined a local mosque community as part of their Islamic faith.

Others have been thrown into camps after speaking out about the detention of their family members.

Sources say the elderly face rough treatment at their hands of their overseers in the camps and endure poor diets and unhygienic conditions in the often overcrowded facilities—circumstances that can lead to severe complications for people already vulnerable to health issues associated with age.

In January, sources told RFA that detention centers in Korla (Kuerle), the seat of central Xinjiang’s Bayin’gholin Mongol (Bayinguoleng Menggu) Autonomous Prefecture, are “completely full” and have been turning detainees away because they could not accommodate them.

One source quoted a friend who was admitted to a camp in the area describing cells that had previously held eight people being made to accommodate 14 inmates, who “were not allowed pillows” and “had to lay on their sides because there was not enough room to lay flat,” let alone space to turn over or stretch their legs.

While the reports from Qaraqash county indicate that neither beatings or physical torture were the cause of the camp deaths there, information previously provided to RFA suggests that poor conditions in the facilities and disregard for the detainees’ medical needs are likely to have played a critical role.

China's central government authorities have not publicly acknowledged the existence of re-education camps in the XUAR, and the number of inmates kept in each facility remains a closely guarded secret, but local officials in many parts of the region have in RFA telephone interviews forthrightly described sending significant numbers of Uyghurs to the camps and even described overcrowding in some facilities.

Citing credible reports, lawmakers Marco Rubio and Chris Smith, who head the bipartisan Congressional-Executive Commission on China, said recently that as many as 500,000 to a million people are or have been detained in the re-education camps, calling it ”the largest mass incarceration of a minority population in the world today.”

Adrian Zenz, a lecturer in social research methods at the Germany-based European School of Culture and Theology, said the number “could be closer to 1.1 million, which equates to 10-11 percent of the adult Muslim population of the region."

China regularly conducts “strike hard” campaigns in Xinjiang, including police raids on Uyghur households, restrictions on Islamic practices, and curbs on the culture and language of the Uyghur people, including videos and other material.

While China blames some Uyghurs for "terrorist" attacks, experts outside China say Beijing has exaggerated the threat from the Uyghurs and that repressive domestic policies are responsible for an upsurge in violence there that has left hundreds dead since 2009.