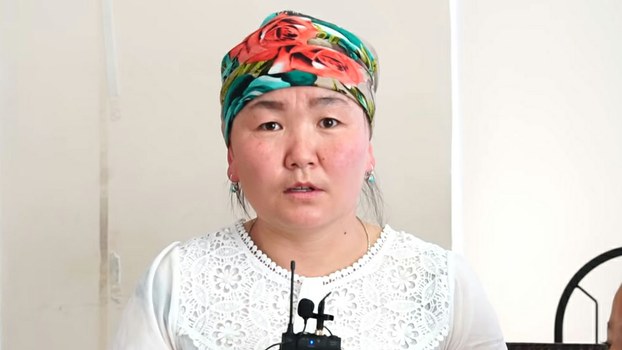 Detainees in the vast network of political “re-education camps” in northwest China’s Xinjiang Uyghur Autonomous Region (XUAR) are given an hour or so to “cry” every two weeks, according to a young ethnic Kazakh woman who was held at one of the facilities.

Since April 2017, authorities in the XUAR have held an estimated 1.5 million Uyghurs and other Muslim ethnic minorities accused of harboring “strong religious views” and “politically incorrect” ideas in the camps, which China claims are an effective tool to protect the country from terrorism and provide vocational training.

Gulzire Awulqanqizi, a Kazakh woman who was held at the Dongmehle Re-education Camp in Ili Kazakh (in Chinese, Yili Hasake) Autonomous Prefecture’s Ghulja (Yining) city from July 2017 to October 2018, recently told RFA in an interview that detainees dealing with the stress of 14-hour days of political study are given a “crying session” every two weeks.

“They say, ‘Now you can cry,’ but if we cry at other times when we feel the need, they criticize and threaten us, saying they will move us to a different camp,” said Awulqanqizi, who now lives in exile in Almaty, in neighboring Kazakhstan.

“When we feel sad and cry, they say, ‘You cannot cry now—you can only cry when it is your allotted crying hour.’ At the crying hour, they shout at us, ‘Now you cry!’”

According to Awulqanqizi, authorities in the camps have established a crying hour because “they know we were suffering,” but even when detainees are permitted to express their emotions, “we have to cry quietly” while monitored by camp officials.

“They stayed and watched us,” she said, adding that each classroom was observed by five teachers and two police officers.

Classroom monitors would threaten detainees with electric batons and verbally abuse them if they cried outside of permitted crying times.

Awulqanqizi said she frequently shed tears while struggling to cope with the conditions of her camp, but rarely during the official crying period.

“Tears wouldn’t come to my eyes. Instead, I felt humiliated.”

According to Awulqanqizi, detainees at the Dongmehle Camp were escorted daily from their dormitories by armed police officers to their classroom, where they were forced to take part in political studies for 14 hours at a time, and only granted two two-minute toilet breaks.

They were occasionally given one or two short breaks from studies, but had to remain within the classroom, where they also were made to eat their allotted three meals a day.

After finishing their studies, they were escorted back to their dormitories, where they were forced to study Mandarin Chinese before being given permission to sleep.

Detainees were not permitted to speak to one another during their studies, even if they had questions about the work, or in their dormitories, where there were “cameras monitoring us at all times” and a supervisor assigned to watch them throughout the night.

Adrian Zenz, a lecturer in social research methods at the Germany-based European School of Culture and Theology, has said that some 1.5 million people are or have been detained in the camps—equivalent to just under one in six members of the adult Muslim population of the XUAR—after initially putting the number at 1.1 million.

Michael Kozak, the head of the State Department's human rights and democracy bureau, in an apparent reference to the policies of Hitler's Germany and Stalin's Soviet Union, said in March people "haven’t seen things like this since the 1930s" and called the internment of more than a million Uyghurs "one of the most serious human rights violations in the world today."

In November 2018, Scott Busby, the deputy assistant secretary in the Bureau of Democracy, Human Rights and Labor at the U.S. Department of State, said there are "at least 800,000 and possibly up to a couple of million" Uyghurs and others detained at re-education camps in the XUAR without charges, citing U.S. intelligence assessments.

In remarks at a news conference at the Pentagon on May 3 that rankled Beijing, Randall Schriver, U.S. assistant secretary of defense for Indo-Pacific Security Affairs, said “the Communist Party is using the security forces for mass imprisonment of Chinese Muslims in concentration camps.”

Chinese Foreign Ministry spokesman Geng Shuang told a news conference on May 6 that China “voiced strong dissatisfaction and firm opposition” to Schriver’s comments, which he called "totally inconsistent with the facts.”

It is completely disregarding the truth, upside down, discrediting China

Xinjiang is so peaceful now with more than a million Muslims behind bars.

Do not cry, they are testing you to see if you are ready for next phase.